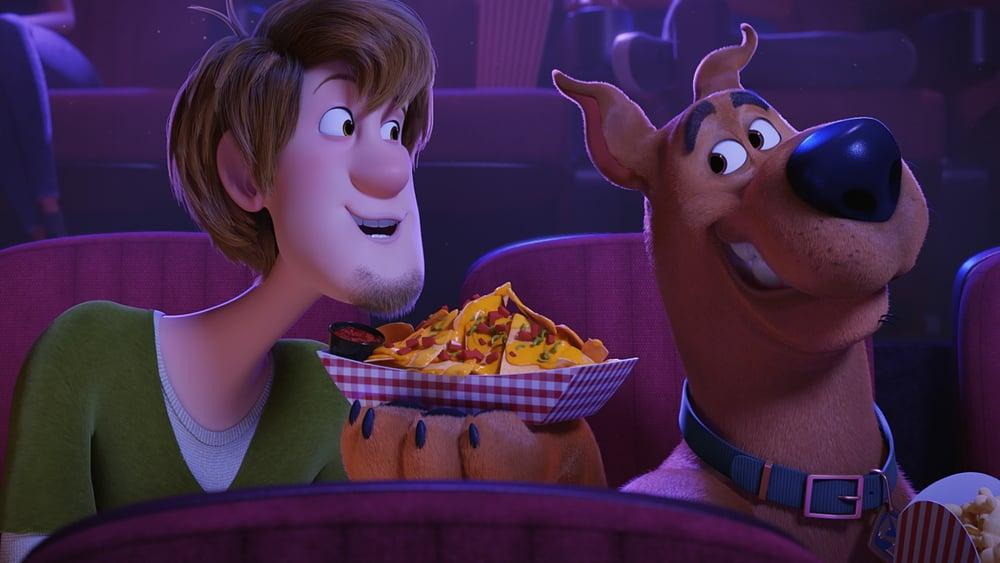 Scoob, or Scooby, or Scooby Dooby Doo...no matter your preference on the easily spooked canine’s name, the furry gumshoe and the rest of the Mystery Inc. gang have been sleuthing for decades proving the staying power of a tried and true spooky mystery formula. Curious it will be for many how, in Scoob!, that formula has been mostly swapped out in favor of something a little more ambitious -- a pitch to piece together a larger Hanna Barbera cinematic universe.

Starting where it all began, Scoob! opens with a scene depicting how Shaggy initially crossed paths with his longtime buddy. The film tugs on the heartstrings early and often between the two snack pals. We quickly see how the pair connect with the rest of what will become Mystery Inc. and the rest, as they say, is history. Fast forward to the gang deciding to go legit by opening their own store front for Mystery Inc., which they can’t do without an investor in the form of Simon Cowell (for some reason). But Cowell won’t invest so long as Shaggy and Scooby are involved. The duo split off only to be attacked by cybernetic bowling pins and bowling balls before being rescued by superhero Blue Falcon and his team. We then learn that there is a larger scheme being orchestrated by Dick Dastardly to use Scooby to bring about the Dogocaplypse.

If you feel like you’ve taken one too many Scooby Snacks after reading that, join the club. Scoob! has some out there weird ideas, but the cute and easily approachable animation helps soften the edges of its wacky premise. The allure of 3D animation aside, seeing the gang outside of the 2D world they’d existed in is undoubtedly an adjustment along with some new voices behind the pixels. Still, the writing is just sharp enough to appeal to the kiddos, while leaving a bit of a playful edge to appease the kids at heart. Though one can’t help but notice the team of writers trying a tad too hard to inject some adult tinged humor here -- let’s face it, no one needs a two plus minute bit about how Scooby can’t say “Dick”.

As an extension of the cartoon that gives avenues to spinoffs and screen time to lesser known Hanna-Barbera characters it’s hard to fault the filmmakers to any significant degree. The movie is quickly paced and never bores. Mark Wahlberg’s Blue Falcon becomes a highlight once he’s introduced and the action set pieces are a hoot to behold. Even as you might be jonesing for your classic Scooby Doo mystery, the increase in scope and action remains a welcome deviation even if the film is constantly cracking pop culture jokes that absolutely will not play well years down the road.

The series’s spooky investigative elements, for better or worse, have largely been supplanted as  Scooby and the gang find themselves in a different sort of genre. Scoob! is much more like a superhero adventure/action film for kids that just happens to feature Scooby as the catalyst. The writers try to throw in flairs of the old school cartoons, but this is truly meant to refresh the characters and formula in a way that won't work for everyone. However, there's plenty going on to keep the movie entertaining even when it might feel like it's betraying the core spirit of the franchise.