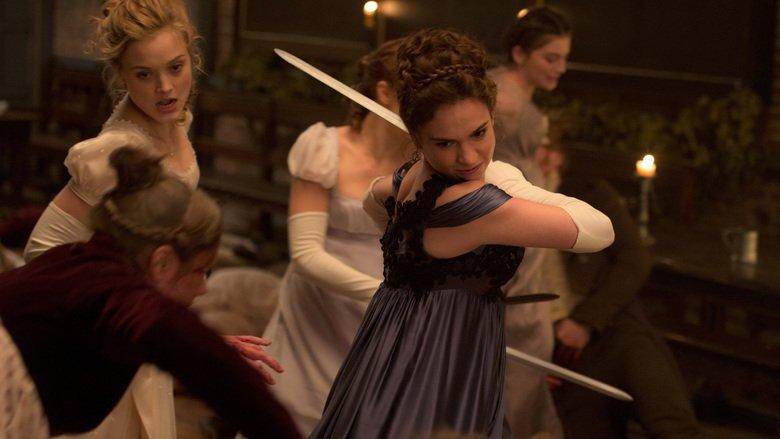 Horror mash-ups are common staples of the genre. All the way back to the Universal backlot days, Frankenstein has not only had his day in the limelight, but he’s also met the likes of Dracula. Freddy Krueger has gone blade to blade with Jason Voorhees. Now, in 2016, the undead have gone brain to brain with Elizabeth Bennett. Pride and Prejudice and Zombies is the latest adapted film from author Seth Graham-Smith who has had the film treatment done to his work in recent years with Abraham Lincoln: Vampire Hunter. While the formula of the Jane Austen love story still remains within Smith’s adaptation, the addition of the zombie plot actually creates an engaging experience that some viewers will argue is a welcome change. However, it’s difficult to look past the classic status of the original Pride and Prejudice and allow it to become another adrenaline fueled zombie film.

Elizabeth Bennett has never quite fit in. Her father, a noble man of notable pedigree, cherishes all of his daughters, but particularly favors the rebellious Elizabeth for her subversive look at the world. All of the girls have a future husband to pine for, but their world is also controlled heavily by the presence of flesh eating zombies. With the arrival of Mr. Darcy, a war hero that requires nothing short of perfection from his comrades, Elizabeth finds herself completely bewitched by the arrogance and kernel of compassion that rests within the military leader. As her sisters begin to find refuge with the promise of future husbands, the threat of the zombie apocalypse closes in on Elizabeth and she must find any way possible to reclaim her piece of mind.

Above all, Pride and Prejudice and Zombies will not please every audience member. The classic aspect to the original source material by Jane Austen keeps the story from ever becoming anything new and fresh, which unfortunately seems to be the films ultimate goal. Adding zombies to an established story isn’t enough to set it apart from expectations. Those precedents aside, the film is a fun ride. Even for those familiar with the Pride and Prejudice story will find that the characters within Smith’s zombie version have the additional layers of being fighters. Lily James plays the classic Elizabeth and manages to submit her feminine charm mixed with pure action heroine. The means in which the film separates her from the other women, notably Darcy’s prospective wives, is through her heightened physical prowess and knowledge in martial arts. The zombie aspect is actually the part that feels less focused upon. Apart from a few killing spree scenes, the most exciting being the opening sequence, the physical aspect to the story mostly comes from watching the Bennett sisters confront the men in their lives.

Despite the title and premise requiring some getting used to, the film does play with every angle that it can when combining the two worlds. Especially in today’s progressive society that is calling for strong female leads, Pride and Prejudice and Zombies is a step in that right direction. It’s a mixed bag that will never be a classic of the romantic drama, or even horror film, but it’s a surprisingly valiant effort in creating updated entertainment.

It Stains the Sands Red