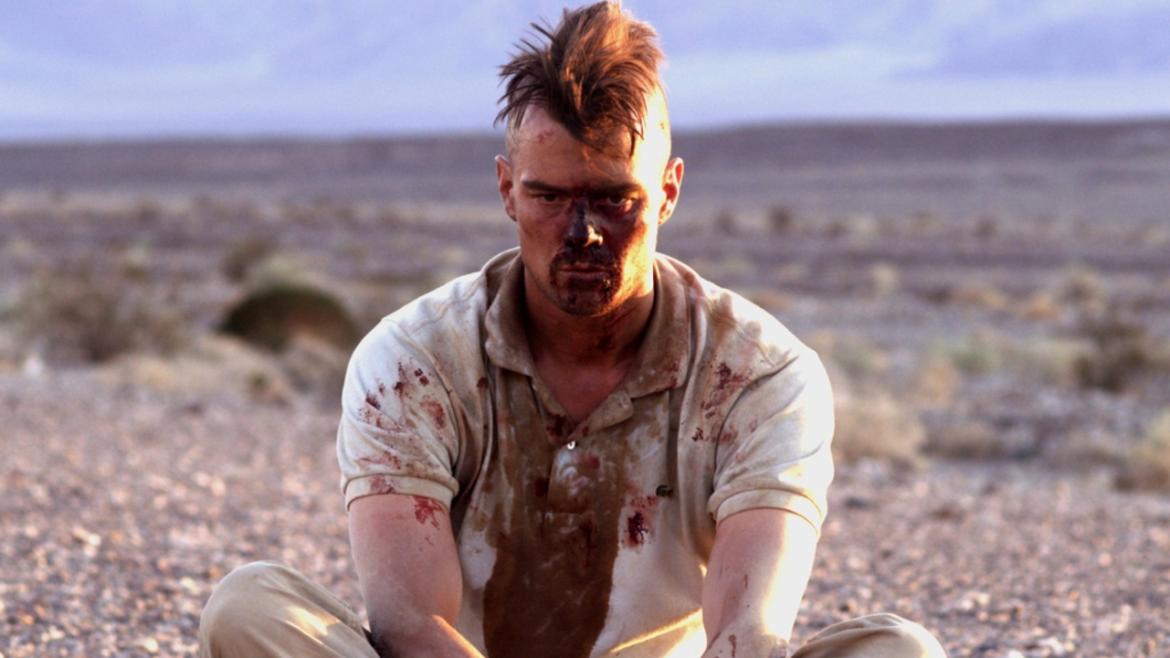 Death Valley would probably not make the short list of places one might imagine to be the ideal setting to repair a fractured relationship. Between daytime temperatures that threaten to turn your insides into a hot pocket that give way to freezing cold nights that leave you a human meatcicle, the setting doesn’t lend itself to introspection and open dialogue. Yet that’s the situation that Mitchell (Josh Duhamel) and Carter (Dan Fogler) find themselves in when the latter’s truck breaks down in the middle of the desert, leaving the pair stranded without food or water.

Scenic Route opens with a violent flash forward as the duo pound the snot out of one another by the roadside. Windows are smashed, knives are drawn and crutches are used as blunt instruments until both of them are bloody, mangled and possibly dead. It’s the Koetz’ brothers way of letting the audience in on the fact that this friendship is doomed long before the pair know it themselves.

The problem with Scenic Route is it wants to be a deep film with a lot of meaningful things to say about adulthood and manhood but Kyle Killen’s script barely scrapes the surface and comes off like what a couple of frat bros think growing up is like. Carter makes the argument that Mitchell settled by marrying a woman that made him trade in his guitar and friends for a big house, a family and cubicle career that comes with a big salary and motivational posters. For his part Mitchell comes clean on no longer being attracted to his wife after pregnancy changed her figure and only being able to have sex with her while imagining the younger woman he had a brief fling with. Mitchell throws Carter’s numerous failures back in his face in retaliation. Carter’s failed as a writer. Now that Carter lives in his now broken down truck with no money or prospects he wants to fling Mitchell’s success in his face. The script wants to make it sound like the pair are sharing profound confessions about the nature of selling out of staying true to one’s integrity but it comes off as whiny, self-centered and unable to accept there’s a middle ground that allows you to keep the things you hold dear while moving on in life. For the men of Scenic Route the height of reclaiming one’s manhood involves giving yourself a mohawk in the wee hours of the night.

Duhamel and Fogler do the best they can with the limits of what they’re forced to work with. Duhamel gives off the vibe of a man barely keeping it together. He’s a coiled ball of rage, wound so tight that he can’t help but unleash a series of mini tantrums when pushed past his breaking point. The comic high point of the film occurs when he blows the pair’s best chance of rescue by frightening off an old woman with his caveman act.

I would like to give Scenic Route credit for trying to do something more with the “stranded in the middle of nowhere with little hope of survival” trope, but its insistence on believing it’s a much smarter film than it actually is prevents that from happening. I can tolerate a little “bro philosophy” now and again, but when the final few minutes take a last desperate attempt at being “deep” with a sub-Shamalan level “twist” I can’t help but be annoyed. Sometimes there’s a reason for a road being less travelled: it’s because it’s a shitty way to go.