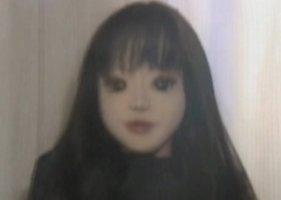 Dear readers of Bloody Good Horror: It is with deepest regret that I must inform you that your regularly scheduled review won’t be seen here today. In its place I will be attempting to make sense of something called “Marronnier” which I watched under the mistaken assumption that it was an absurdist low-budget Japanese horror film but which I have come to believe is some sort of highly advanced audiovisual programming language for robot sex dolls that was accidentally released to the west in DVD form. Reviewing “Marronnier” is like reviewing a mescaline trip where you are forced to ride a J-Pop remixed version of “It’s a Small World” backwards for an hour and a half while someone slowly inserts a Pocky snack stick up your nasal passage. I shall do my best.

“Marronnier” refers to either a person, a doll, a type of doll, a Japanese fad, a clothing style, an unspeakable sex act or possibly some combination of two or more of these. There’s also a chance it’s a nonsense word made up for this movie. Or an ancient Asian tradition. Who or whatever it is, this one girl is crazy about it/him/her. She lives with a bunch of creepy dolls and a guy with a buttcrack-length rat-tail who is either her brother or her boyfriend or possibly both. He performs with a children’s rock band / puppet show which might have something to do with the plot but as far as I could tell, doesn’t. She also has a friend with whom she enjoys trying on dresses.

Meanwhile, a guy in a mis-buttoned Levi Red Tab denim shirt is killing beautiful people. He puts their bodies in a machine he built that uses water from a pond that has the curious property of turning people into wax. He carves the wax bodies down to creepily detailed anatomically correct prepubescent wax dolls because that is what he does. He is obsessed with the aforementioned girl and wants to marry her. Or possibly kill her. Or turn her into a doll. Or maybe he’s her brother. Things occur followed by stuff happening and if I understood the ending correctly the whole thing may or may not have been an elaborate dream sequence taking place in the mind of a puppet. Spoiler alert?

It never quite gels but it could be argued that a coherent plot isn’t what “Marronnier” is going for. It plays like a live-action cartoon. Almost every shot is an extreme close-up of an actor wildly mugging for the camera and all of the dialogue is delivered in the rapid-fire chatter-y style common to anime. It’s safe to say that any movie that features death by sewing machine, a talking shower drain and a scene where a guy tries to woo a girl by vigorously brushing his teeth at her until blood starts running down his chin isn’t exactly taking itself seriously. Hell, at one point the movie even fast forwards through a boring scene for us, seemingly not so much for stylistic reasons as because it realized it was getting a little dull and that part wasn’t important anyway. I have to give it props for that and I firmly believe the world would be a better place if more movies had the decency to fast forward themselves when they start getting boring. I refuse to buy a Blu-ray player until this technology comes standard. Take that Sony.

Being boring is one thing “Marronnier” can rarely be accused of. It chugs along at such a pace that by the time you scratch your head at one scene, it’s already moved on to the next one. Anybody familiar with Japanese movies knows that their snail-like pace is often the biggest strike against them so it is nice to see one that moves at such a break-neck speed, even if it doesn’t make much sense. By the time you get to the penultimate scene which takes place in, I swear by the googly eyeballs of Kermit, a magical land made entirely out of wedding dresses, you’ve long since given up any hope of understanding what’s going on. Best to just let the movie pull your strings.

Whatever “Marronnier” is, it certainly is a lot of it. I’m not sure if I liked it or not. I’m not even sure if that’s a valid question. Maybe “Marronnier” isn’t something for us to like or dislike so much as something for us to stare at in a paralyzed state of confusion and horror. What I do know is that I’m going to give “Marronnier” a hesitant recommendation for two reasons. Number one, because I hope I can trick one of you into watching it so you can explain to me what happened. I’m not proud of that, but there you go. Ball’s in your court, dear reader. Number two is because I’m a little bit afraid of this movie and I don’t want to make it mad at me. Creepy dolls freak me out and I couldn’t handle one of those things showing up at my doorstep one night.