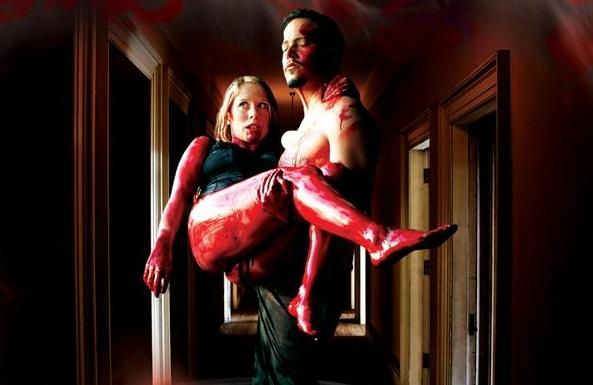 If you were to take a look at the plot summary of "Hell House" on IMDb, you'd find a synopsis of epic proportions. Legions of demons led by evil Gods, ancient texts containing containing the secrets of conquering demons, possessed families and long lines of soothsayers protecting humanity in the dark wars of hell. All of this looks epic and fantastical on paper. Within five minutes of the title credits rolling however, it soon becomes apparent that the writer of the plot blurb was a bit more ambitious than the filmmakers themselves.

"Hell House: The Book of Samiel" could be considered a tough movie to review. In vision it is pretty grand, in delivery not so much. That's not to say it is a horrible movie however. With low budget horror it is often a mixed bag and you can generally expect things such as low production values, questionable acting and the like, so you can for the most part look past these values as far as reviewing goes. It comes with the territory and generally things like budget constrains the process so that you know you are going to be getting newcomers. With "Hell House" there are some genuine flashes of good horror here that are sometimes hindered by editing mistakes and an overall slow pace.

The biggest of these problems comes from often muddy plot points that aren't set up very well. This causes confusion and leaves you scratching your head from time to time. The basic plot of "Hell House" is fine; a haunted house that has become a portal to hell. They get this idea across in the movie just fine. It is the additional factors that are sprinkled about that become confusing.

As we see Paul's father approach the house to try and warn his son and friends away, he his attacked from behind by a seemingly random hobo that shoves him into the darkness. Sure, an effective scene, but only if we actually know who this hobo was. It comes to light later in the movie, but when it happens it seems out of place and a bit odd. Later as the kids arrive, we see everybody getting comfortable and starting their own little party. As we focus on the two girls of the group, who up until this point have shown nothing but common courtesy to each other, soon start to make out and undress each other... For no apparent reason. Again, later it comes to light that the house is having an effect over them but until that moment, the scene is muddled and seems overly gratuitous. It is small moment such as these that make "Hell House" come across confusing at times, obscuring a decent plot for seemingly no reason.

Where the movie excels however is in its individual scenes showcasing the evil of the house and the effects on the people within. At least when they are shown in context that is. There is a great moment in the movie as we watch two of the people in the house start to re-enact a flashback from the past. This scene of them is interspersed with scenes of the actual flash back as we learn the power of the evil over the house. It is scenes such as these that are well thought out and well shot making the movie enjoyable in parts. There are some genuine moments of horror, some good jumps here and there and some good dark comedy as well. There are definitely flashes of good film making here, only they need to be pulled together into a more solid whole.

By the end of this movie, you are left feeling that it is a good enough movie to sit through. It has its entertaining moments, plenty of blood and guts and some good laughs. Then the movie turns a corner and that over ambitious synopsis writer rears its head again. The final climax of "Hell House" starts to spin out of control. It stays coherent and you are able to comprehend the outcome, but it is pretty obvious that the film makers have saved their entire budget to unload at this final moment.

It's commendable to be sure; why not give your viewers a good payoff? Here though the finale becomes over the top with the out of place effects such as witches spells and the like. Honestly, I think I'm being a bit too harsh. The worst part here is the soothsayer saving the day with badly added CGI spell effects. The demon portions were fine, you get to see a cute red head in nothing but underwear and a bucket of blood. Sure, our lead actor becomes a bit stiff and wooden with his heartfelt cries of love for his possessed girlfriend. Again, these are expected in a film such as this. It is the cheesy balls of light that kill it.

"Hell House: The Book of Samiel" isn't for everybody. It is low budget and is filled with low production values. For this type of film however, it is an okay watch.