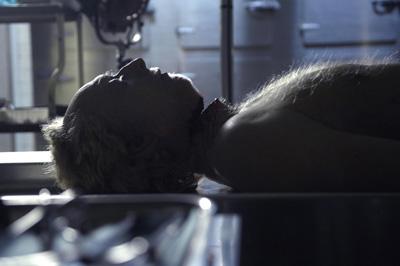 It’s been nearly 20 years since we were last treated to a horrific “4,” and there’s a good reason. Few concepts in the history of cinematic terror have had the gravitas to sustain one decent sequel, to say nothing of three chronological entries. This final point is an important one, as today we’re treated to many a serial restart, but few true sequels. Once venerable franchises, and many not so venerable, have been trotted out for the re-imagining, but very few have proven capable of producing interesting, frightening, and most importantly, necessary sequels. Unfortunately, the fourth entry in the "Saw" series serves as a perfect example of filmmakers and financiers that just don’t know when to move on.

Darren Lynn Bousman has helmed all but the first of the Saw films, and "Saw IV" succeeds in following in the previous films’ stylistic and generic footsteps. Opening on the autopsy of Jigsaw, the series’ moralistic madman, "Saw IV" plows ahead with its primary antagonist lying on a table, his ribcage splayed open. Where other 4’s have relied on the supernatural to sustain their monsters—in "Friday the 13th: The Final Chapter," Jason quite literally rises from the dead, again—"Saw IV" continues the arc of sustaining the essence of Jigsaw even after the man himself is gone. Truly, the ambiguous mission of using torture to teach individuals the value of their lives proves a powerful tonic that draws a whole slew of cult-like followers into its wake.

The specter of Amanda Young, Jigsaw’s first convert, hangs over the early scenes of "Saw IV," which picks up somewhere in the midst of cleaning up after the last round of brutal traps. Investigators begin wading through a mess of graphically sprung “life lessons,” certain that a new accomplice has continued the work that Jigsaw left behind. From the film’s outset, Bousman plays fast and loose with the concept of time, shifting from past to present to distant past, as he ties Jigsaw’s origins into a story of a new monster’s birth.

The film’s scribes here may have had the largest challenge of all, and it’s a testament to their ability that the film actually maintains its coherence as long as it does. But "Saw" has never been a series that is overly concerned with coherence, and eventually the film devolves into a chaotic mess of jump cuts and flashbacks that are supposed to further our understanding of the characters’ motivations, but instead will leave anyone without a desperately deep knowledge of the series scratching their heads.

Surpassing the third entry’s splatter factor would have been a tall order, and Bousman doesn’t necessarily try, but instead gives us a handful of well-realized, Rube-Goldbergian killing machines. There’s some digital blood spurting, and one really over-the-top set piece wherein a character from Saw’s past finally meets his maker. However, the anxiety that these scenes once created—highlighted best perhaps in the original when Dr. Gordon goes at his foot with the eponymous saw—now seems distant. Bousman and crew have conditioned us to Jigsaw’s ways so well that each successive death scene is interesting for its novelty, but rarely for its surprise or outcome.

Perhaps most of all, Saw IV feels like a celebration of the very fact that it is a fourth. It’s been so long since we’ve seen a horror series create this kind of following that Bousman seems content to play to his fans. There certainly wasn’t much time wasted on coaching up acting performances. Nor was much time spent in script revision.

This film is a trumpeting of "Saw’s" past, but also a revelation of its future. Jigsaw need not rise from the grave because he’s a killer so intelligent he planned for his own demise. He, like Bousman and "Saw’s" creators, has fashioned himself a following, and judging from the carnage in "Saw IV," both that perpetrated on the characters as well as that perpetrated on the audience, it’s hard to imagine that either of the sycophantic groups won’t turn up for "Saw V."

Ultimately, that’s okay. Jason, Freddy, Michael, and even Pinhead have shown us that interesting characters and premises can carry a franchise. With "Saw" the idea that only Jigsaw’s victims have the ability to make the decisions to change their lives has become the mantra that will drive the series forward. Similarly, it seems only the fans of the series can determine when they’ve had enough. Judging from the staleness of "Saw IV," that time has probably already passed, but as Jigsaw relays from beyond the grave in the film’s opening sequence, it would seem that the games are just beginning.