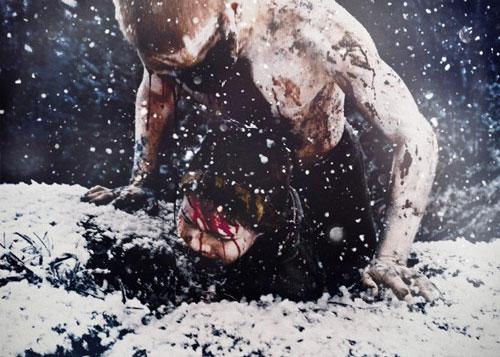 Let me preface this article by stating that my own personal taste in horror may differ drastically from your own. More often than not, the films that I consider exceptional tend to be very different than the choices made by those who consider themselves to be hardcore genre fanatics. And before you get your underwear in a twisty, painful bunch, no, this isn't about snobbery or elitism -- it's about a simple difference of opinion, mine frequently being the obvious minority. So when you read a review from yours truly that sings a movie's praises from a picturesque hilltop, please keep in mind that I absolutely adored Jaume Balaguero's underrated 2002 spookfest "Darkness" and adjust your expectations accordingly.

Why do I feel the need to give you this admittedly pointless slab of information before diving head-first into this review, you ask? For starters, Anti-Jussi Annila's savagely beautiful 2008 horror/mystery "Sauna" (aka "Filth") is easily one of the best horror films I've seen thus far this year, driving a nasty, surrealistic stake into the cinematic hearts of both "Dead Snow" and "Martyrs."

Secondly, I don't expect others to feel quite the same way I do about this surprisingly thoughtful Finnish horror film. It's slow, it's strange, it doesn't answer very many questions before the end credits roll, and the level of gore is kept to a bare minimum. What it does have in-stock, however, is a dreary, foreboding atmosphere, a handful of outstanding performances, and a finale that will violently wedge itself into your wandering mind for days on end. Of course, your thoughts and feelings may vary on the subject.

Ville Virtanen and Tommi Eronen star as a pair of troubled Finnish brothers -- one a sheltered college graduate (Eronen), the other a war-hardened savage (Virtanen) -- sent to draft a map of an uncharted stretch of land near Russia, an area that neither men are too thrilled about venturing into. They are accompanied on their reluctant mission by a group of Russians who, along with their former enemies, are weary of heading into this God-forsaken swamp to help establish borders between the two formerly warring countries. Despite their strained relations and some initial reservations about the trip, the group sally forth into the unknown to accomplish the task at-hand.

Their adventures soon lead them directly into the heart of the swamp, a dull, stagnant tract of land which houses a small township and a peculiar looking building situated in the middle of a small body of water. The villagers are of little help, though some seem to know more than they’re letting on. What, exactly, is the purpose of this out-of-the-way sauna? Is the village's only child a boy or a girl? And what, pray tell, went down between the aforementioned brothers and the poor girl they locked away at the beginning of the film? Let’s hope you like open-ended questions and drawing your own conclusions, as “Sauna” doesn’t really go out of its way to provide you with the information you seek.

I, for one, don’t mind letting my limited imagination fill in the proverbial gaps. In fact, I own David Lynch’s intentionally cryptic and extremely hard-to-follow “Inland Empire,” and I’ve actually watched it more than once. Does it make sense? Of course not. Sometimes figuring out how all of those confusing bits and pieces fit together in the grand scheme of things is part of the fun; you might be right, you might be wrong -- it’s really all in the eyes of the beholder, to borrow a very well-worn phrase.

Annila and screenwriter Iiro Kuttner certainly know how to craft genuinely head-scratching scenarios without giving you the feeling that someone is playing a very cruel trick on you. Every single element in the movie has its place, I’m sure, and with additional viewings, I might be able to work out the specifics. As it stands, I’m just happy to have experienced the film at all.

The only thing more satisfying than Kuttner's script and Henri Blomberg's stunning cinematography is veteran Finnish thespian Ville Virtanen. The talented actor's skillfully nuanced performance as Eerik is the viscous cinematic glue which holds the film's dodgier moments together. And while there's nothing inherently wrong with the rest of the picture's immensely talented cast, Virtanen is the one who keeps you intrigued throughout. His character's subtle transformation at the end of the feature is an effective and haunting way to conclude the story. As long as you can handle the vagueness of it all, that is.

Clocking in at a brisk 79 minutes, "Sauna" is an enthralling mystery that occasionally dips its toes into the murky lake of supernatural horror. At its core, the film is very Lovecraftian in nature: cultist monks, unspeakable evil, the unknown, and a town full of strange individuals are just a few of the unwieldy traits which Annila's incorporates into this weirdly thought-provoking motion picture. Not only is the story completely engaging, it is, at times, vividly frightening, sending more than a few caravans of high-grade chills down my frosty backside. Truthfully, outside of extreme nitpicking, I can't think of one single thing I didn't like about the film, something that can't be said for most movies I watch these days. Is it perfect? That really depends on you.