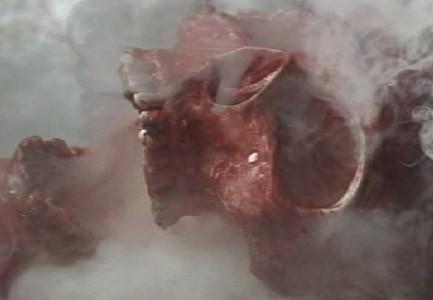 About halfway through self-proclaimed cult director Brett Piper's Shock-O-Rama distributed no-budget horror farce "Drainiac," I came to a startling, bowel-liquefying realization: I had seen this movie before. Given the number of shoddy, B-grade motion pictures I haphazardly cram into my cluttered mindscape over the course of any given year, it's not uncommon for me to completely forget about something I've previously seen, especially if the film is uncommonly dull in every sense of the term. In the case of "Drainiac," there's a very good reason why my brain decided to flush this experience down the mental toilet: Simply put, it's a wretched, miserable film from the first frame to the very last. Considering my tolerance for this sort of cheap entertainment, that speaks volumes.

In fact, the only thing I can immediately recall from my initial viewing of "Drainiac" is that I couldn't wait for the damned thing to end. That and the lousy, second-rate computer-generated effects that seemed to almost mock me with their complete lack of quality. Oh, and I vaguely remember removing a large, black, unidentified piece of sludge from beneath both of my big toenails about fifteen minutes in. Now that I think about it, there's quite a bit about Brett Piper's incredibly slipshod production that bubbles uncomfortably to the surface of my consciousness. Judging from the violent physical and emotional scarring I suffered during the first go-around, I don't think it's very wise to watch something like this more than once. Unless, of course, you're a masochist.

Anyone who’s remotely familiar with Piper's curdled body of work understands that you don't go into one of his movies expecting ground-breaking, award-winning cinema. The guy's a bonafied master of the cheesy, no-budget schlockfest, a second-rate deity amongst those who grew up suckling at the misshapen teat of Roger Corman or USA's "Up All Night." Piper's 1990 fantasy epic "A Nymphoid Barbarian in Dinosaur Hell" is definitely an unforgettable, one-of-a-kind motion picture, as is his campy 1996 creature feature "They Bite." Although you wouldn't know it from looking at the distilled cinematic flatulence that is "Drainiac," Brett is capable of delivering fake plastic thrills when he wants to. How he managed to botch a story about a group of whiny, two-dimensional teenagers battling an ancient evil within a suburban drainage system is truly perplexing.

Upon closer inspection, Piper’s limp, napkin-thin script appears to lie at the heart of “Drainiac’s” numerous problems. In addition to having a gaggle of worthless individuals operating as the heroes of this particular endeavor, there’s actually very little in the way of genuine horror to be found anywhere in the movie. The kills are unforgivably weak, the story offers up absolutely nothing in terms of suspense, and the special effects -- many of which were added by the director and his colorist specifically for the film’s Digitally Remastered Widescreen Edition DVD release -- are distractingly poor. It’s not even unintentionally entertaining. Yes, it’s that awful.

What’s sad about this entire unsightly affair is that Piper is actually a surprisingly competent filmmaker. Despite the inherent goofiness of most of the projects he tackles, the guy has an uncanny knack for making the most of his tiny little budgets, and often executes sequences that many directors couldn’t achieve if they were up to their receding hairlines in production funds. Even the corny stop-motion segments are strangely clever in that Sam Raimi, "Evil Dead" kind of way. Too bad they were wasted on a movie that doesn’t seem to care one way or the other about your enjoyment. The whole thing is a damn shame.

I honestly can’t recommend “Drainiac” to anyone who doesn’t repeatedly and methodically beat their forehead against a jagged stone wall on a regular basis. It’s just not a good movie, regardless of what angle you attempt to approach it from. As a straightforward horror movie, it’s downright laughable. If consumed as campy, throwaway Friday night entertainment, it’s a complete waste of time. You can’t even make it work as an unintentional comedy, because Lord knows I tried. It’s not funny, it’s not smart, it’s not scary -- it’s the very definition of a bad motion picture, plain and simple. Take it from someone who's had to sit through this abomination on two separate occasions. I think I know what I'm talking about.