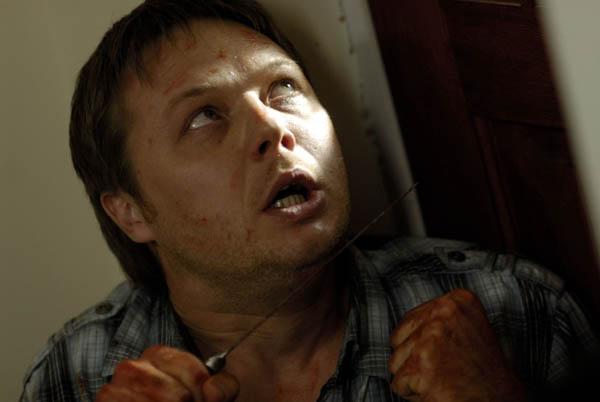 I recently had a very long conversation with one of my co-workers about the importance of mystery within the horror genre. Having every element of the story spelled out for you in vivid detail is a trait neither of us are a fan of, especially when the explanations ultimately ruin the eeriness of the overall experience. Rob Zombie's "Halloween" was an example we cited frequently, as the recent reimagining effectively stripped the ambiguity from Michael Myers, transforming him into yet another abused and neglected psychopath with mommy and daddy issues. Having elucidations spooned directly into my gaping maw sounds considerably less appealing than dealing with unanswered questions and intentional loose ends.

Director Lawrence Gough's creepy 2009 shocker "Salvage" delicately balances its vague explanations with a fair amount of secrecy and a metric ton of unrelenting suspense. In fact, I spent the majority of the film wondering what, exactly, was happening to these unsuspecting characters as they scrambled to stay alive. This, of course, is not a complaint, as I tend to enjoy puzzling out the specifics of a story before the filmmakers pull back the curtain and reveal everything to the audience. Thankfully, Gough doesn't paint a very clear picture, which forces you to connect the dots on your own. The premise may sound fairly straightforward, but it's far from simple.

Neve Mcintosh stars as Beth, an extremely reluctant mother who is reuniting with her estranged daughter Jodie (Linzey Cocker) on Christmas Eve. Once the poor girl arrives on the scene, she is treated to the sights and sounds of her mom knocking boots with a stranger by the name of Kieran (Shaun Dooley), an event which doesn't help ease the tension between the two women. Jodie, infuriated by her mother's behavior, takes refuge at a neighbors house and refuses to discuss the matter despite Beth's misguided attempts to soothe the situation. Defeated, she retreats to her home to give her daughter time to cool off and consider the gravity of her decision.

However, any hope of reconciliation is immediately put on hold by the arrival of a squadron of Black Ops soldiers armed to the teeth with an array of deadly weaponry. Without offering up any explanations for their actions, they violently force everyone in the cul-de-sac to lock themselves in their homes. Anyone who blatantly refuses to follow their orders is dealt with in an extremely unpleasant manner. Naturally, Beth is overly concerned about the well-being of her daughter, especially once she witnesses the brutal murder of her neighbor at the hands of the military force currently occupying the streets.

I will refrain from revealing anymore details about "Salvage", its plot, or its surprises. Half of fun is figuring out where the story is headed, though you'll have to wade through nearly half the film before its secrets begin to rise to the surface. Gough and his stable of co-writers wisely keep from rushing directly into the belly of the beast, allowing the paranoia to build slowly before cranking up the intensity by several notches. Once the somewhat surprising twist has been revealed, the film barrels off into an entirely different albeit wholly intriguing direction. Depending on your own personal tastes, this could be a deal breaker, especially once the you reach the picture's surprisingly downtrodden finale.

Although the film is loaded with strong performances, an almost suffocating atmosphere, and a few moments of jolting violence, "Salvage" isn't going to please those who don't appreciate films that take their time getting to the good stuff. What's more, the picture's ambiguous nature, as well as its unexpectedly depressing conclusion, will definitely rub some movie-goers the wrong way. Gough and company have skillfully transformed modern-day, post-9/11 paranoia into a thoroughly mesmerizing and frequently shocking cinematic experience that requires quite a bit of patience from its audience. He's certainly a talent to watch, especially for the select few who still enjoy a little mystery with their horror.