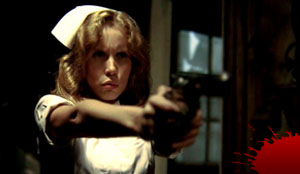 Let’s say somehow you started watching “Run! Bitch Run!” expecting, I don’t know, an inspirational movie about a boy and his racing greyhound. The first ten minutes should clear up any confusion. The setting is a seedy low-rent whorehouse. In one room a topless couple take bong rips and watch an 16mm nunsploitation film projected on the wall. In another, a drug dealer/pimp idly doodles Sharpie tattoos on his knuckles while a girl services him. Upstairs, a third hooker stares into space while a john pounds away at her. When his comments on her lack of enthusiasm cross over into the realm of insults, she smashes a vase over his head and slits his throat with a knife stashed away in a bedside table. So begins another day in the grimy world of modern-day exploitation cinema.

For the most part, “Run! Bitch Run!” aims to do for the rape/revenge movie what “Black Dynamite” did for Blaxploitation and “Death Proof” did for gearhead flicks. While all three are very much exercises in nostalgia, the primary difference is that the latter two films come drenched in a heavy coating of post-modern irony and tongue-in-cheek humor. “Run! Bitch Run!” is played absolutely straight-faced without any knowing gags or winks at the audience. If it weren’t for the distinctive sheen of digital video, it wouldn’t be hard to pass off “Run! Bitch Run!” as a forgotten exploitation relic from the 70s. Every element is dead-on from the score (a fantastic mix of plodding bass-heavy grooves and Hendrix-style psychedelic freak-outs leavened with the occasional surf rock jam) to the acting (hammy to the point where some characters sound like they’re overdubbed) to the wall-to-wall nudity (from actresses playing hookers and lowlifes who might look a little too close to the real thing for some viewers). In fact, the time period is never made explicit in the movie but the attention to verisimilitude is so strong that “Run! Bitch Run!” could very well be a period piece set in the 70s.

It might be pointless to explain the plot of a rape/revenge movie since all you need to know is right there in the name of the subgenre but for what it’s worth the picture follows two Catholic schoolgirls going door-to-door to sell religious paraphernalia. They knock on the wrong door at the wrong time and find themselves in the clutches of a vicious gang led by a pimp named Lobo. You-know-what happens and the girls are left for dead, but one survives. Awakening in the hospital, she steals a nurse’s uniform and sets off on a quest for bloody revenge against her attackers.

Maybe the biggest problem with the movie is that it apes its source material a bit too well. Once the initial excitement of seeing a perfectly emulated 70s exploitation film wears off you’re left with just another revenge story which doesn’t have any new tricks of its own. There are numerous scenes where nothing happens that are clearly included as padding to get the movie up to a decent running time. When the revenge does come, aside from one squirm-inducing set piece, they’re mostly just swift off-screen gun executions. If you’re hoping for gore or elaborate payback scenarios, you’re not going to find much of it here. Если необходимо выбрать казино с выводом выигрышей определенным способом, лучше искать информацию об игровых залах в тематических рейтинговых списках. В таких подборках, составленных независимыми экспертами, представлены сведения о наиболее выгодных и качественных азартных сайтах. На них можно прекрасно развлекаться и играть в любое время.

Recently “Last House on the Left”, one of the primary inspirations for “Run! Bitch Run!”, got a fairly high-profile remake which scrubbed away most of the sleaze and sanitized the movie for mass consumption. While the original was hugely controversial and probably ruined many slumber parties and date nights throughout the 80s and 90s when it was rented in ignorance, the remake was safe enough to be watched in mixed company with little-to-no squirming or apologizing afterwards. “Run! Bitch Run!” is an unrepentantly sleazy movie that absolutely nails the look and feel of “Last House” and other movies of its type like “I Spit on Your Grave” and “They Call Her One Eye”. If you judge a film by how well it accomplishes what it sets out to do, then “Run! Bitch Run!” knocks it out of the park. Whether a near-perfect recreation of one of the most disreputable subgenres this side of Italian Cannibal movies is a worthwhile cause or not is a completely different question.