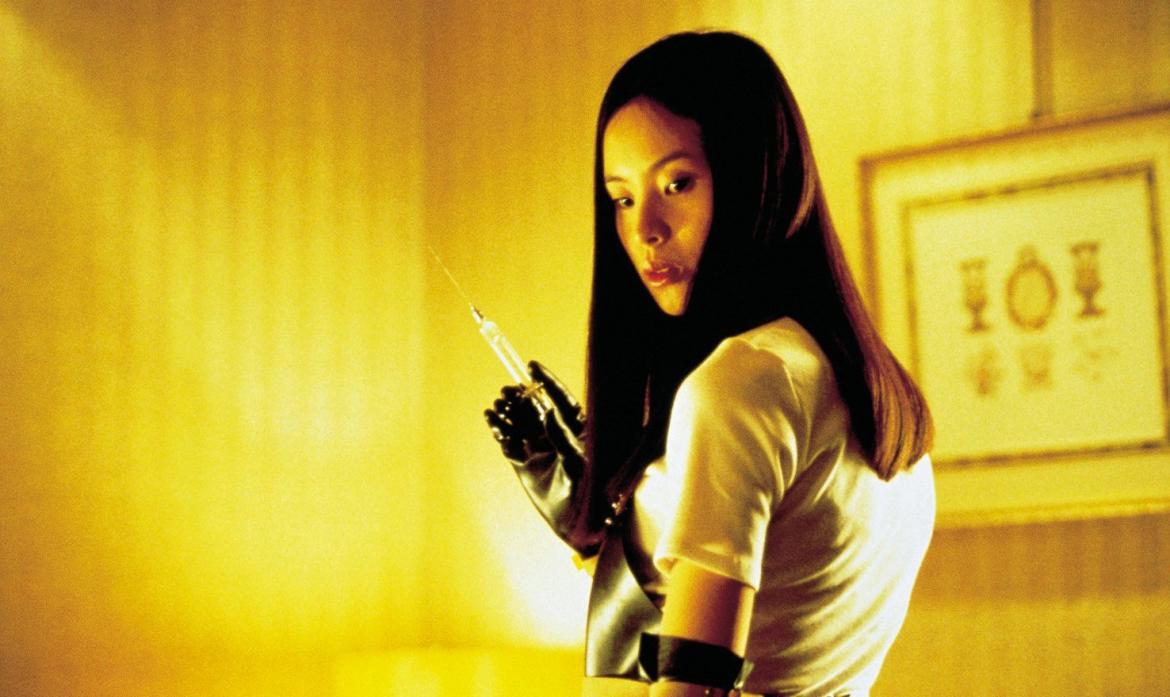 It’s pretty bizarre to me that, as notorious as the film “Audition” is, I’d somehow I’d made it this long without either watching it or even so much as hearing any of the specifics of the movie. In fact the only thing I’d really known about this movie is that it was one of the films that helped inspire “Hostel,” thereby helping to launch the “torture-porn” craze in horror here in the States.

The film is about an aging business man named Aoyama who’s wife has died and who’s son suggests he find a new wife. He complains to a movie-producer friend that he doesn't know how to meet any new women and the producer suggests they hold an a movie audition so Aoyama can meet and interview basically as many young and beautiful women as he wants.

From the outset Aoyama is infatuated with a young woman named Asami when he reads her resume and she writes about her love for ballet and how she was no longer able to perform because of a hip injury. Aoyama feels a kinship to her because he felt she also understood what it was like to lose something she loved, and also because he wanted a wife who had some kind of artistic talent or skill.

However his producer friend warns him to stay away from her because he has an incredibly strong and intuitive dislike of Asami. He tells Aoyama that it’s possible that she’s a nice person but that there is something “chemical” about her that he finds repulsive. Aoyama quickly disregards his friend’s intuition as nonsense and begins to pursue Asami despite being warned to stay away from her so many times it becomes almost comical. In fact he even has a dream where his dead wife tells him that “she’s no good for him.” Of course Asami turns out to be an absolute lunatic and then later drugs and tortures Aoyama during a drawn-out and incredibly uncomfortable finale. She claims he was just like every other movie producer, and was only auditioning women so he could make them fail and then take advantage of them sexually.

Despite being the fore-runner of the “torture-porn” film, “Audition” has a surprising amount of depth as a bizarre meditation on loneliness. There are several references to different individual’s being incredibly lonely and at one point in the film a character points out that “everyone in Japan is lonely." Aoyama and Asami are both driven to hurt each other out of their own loneliness, and the torture Asami unleashes on Aoyama is an outward expression of her own internal suffering.

The most impressive thing about this movie to me is that it doesn't pull any punches as far as style, pacing, or content. A lot of modern horror films seem simply to be about delivering what the film-makers think the audience wants to see. This movie seems a lot more focused on striking a deep emotion without any regard as to how the audience may react.

Ultimately I think "Audition" is a movie I respect more than I enjoyed. The torture scene at the end of the movie is among the most shocking and visceral moments I've ever seen in a movie. However, I found the first half of the movie I found a bit clumsy. While I understand the purpose behind the methodical pacing of this half of the movie, I felt that it was overly sappy and unskillfully executed. The second half is much tighter, more focused, and much more clever. This film was also so unbelievably dark I found it hard to enjoy. The funniest moments in the film were also it’s darkest and most disturbing moments and it actually made me feel dirty for wanting to laugh at them.

One of the most interesting things about looking back at both “Audition” and “Hostel” is seeing the beginning of a sub-genre that so many horror fans, including myself, came to hate. The final death-rattles of “torture porn” were films like “Saw 7" and the even more unfortunate, straight to DVD, “Wrong Turn 4,” and I’m sure multitudes of other trashy movies that were simply just excuses to torture and mutilate people on screen. It seems like the investors of these movies only goal was to reduce something fairly complex, to it's simplest and most vulgar form, just to cash in on a fad.

However movies like “Audition,” “Hostel,” and even the original "Saw" were films that aimed a lot higher than the more “porn”-focused movies that came after them, and I think this goes to show that it is a lot rarer to see someone genuinely create something than it is to find film-makers who are only able to imitate others.