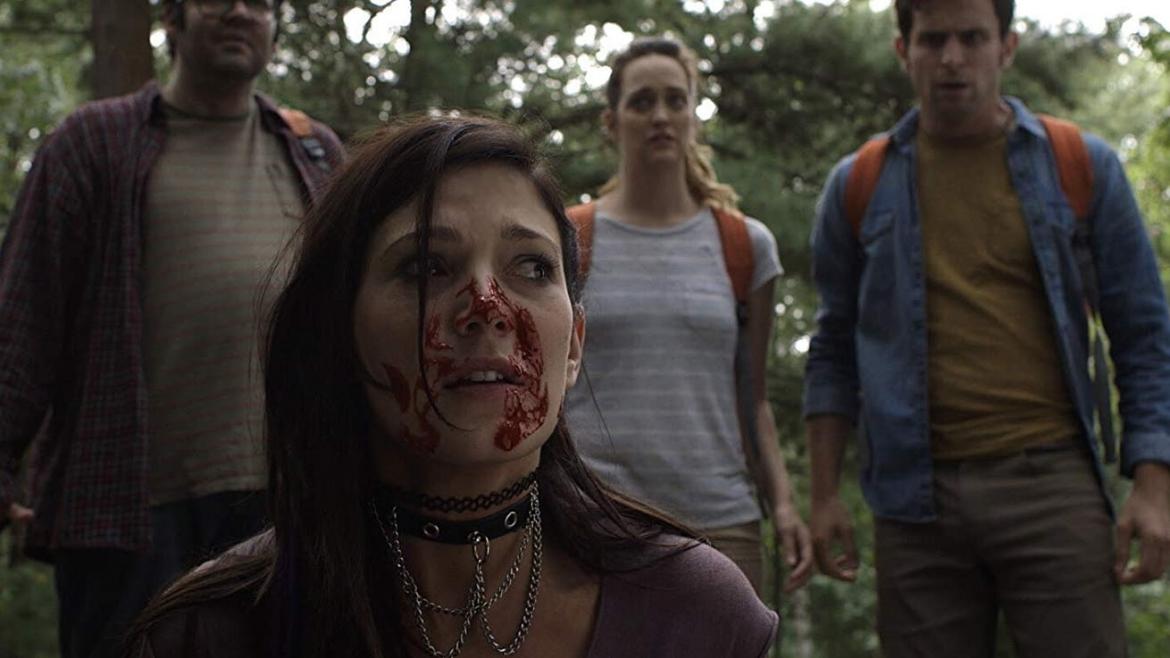 The growing popularity of escape rooms, extreme haunted houses and their kin have lead inevitably to filmmakers working the concept into the cinematic playground. It's not a bad idea by any means, but the thrills these attractions offer potentially do not translate to an audience unless the mystery too engages them in a coherent manner. Ruin Me offers up the potential to do all of those things but too often twists its way out of sync before unraveling completely.

Cleverly playing with horror cliches in the beginning Ruin Me slaps a handful of strangers in the woods for a 36-hour Ultimate horror experience known as Slasher Sleepout. Like your typical escape room, the goal is for the group to hunt for clues and solve a puzzle that they must also uncover with the tools they've been given. However, when members start disappearing things quickly get all too real and the game might be more deadly than what they signed up for.

Blanket character types, shaky performances, and often lame dialogue plague Ruin Me. The film has all the elements of your prototypical slasher, but it's the modern twist that both adds to its appeal and winds up being its undoing. Right around the halfway point the film takes a unique turn, which changes the game we've been watching the group play out to a significant degree. It's intriguing to say the least and to an extent also remarkably clever. That good will is short-lived when in the final 10 minutes director Preston DeFrancis (who co-wrote the script with Trysta A. Bissett) decides to flip the script again turning the film into exactly what it should never have been. It's the logistically equivalent to defying the odds and escaping a building completely engulfed in flames and then inexplicably going back because you forgot your cell phone. Not literally mind you, but the film's version of that is much more "icky" and baffling.

Ruin Me simply not following through on its setup is not its core sin. Placing real horror amongst staged horror isn't a unique setup for many direct-to-video attempts. Rather, it's the latest exploitation as escape rooms and extreme haunts came into popularity. The notable attempt to try to flip the salsher genre on its head does not go unnoticed, but whether it's a lack of commitment or a tragic misconception of audience's intelligence, the finale abandons any sense of subtlety and character in some last-ditch effort to, I guess, be shocking.

While not aggressively offensive, Ruin Me has an identity crisis that keeps it from leaving a lasting impression. Combined with its troubling and lazy climax the end product adds up to nothing more than a forgettable streaming option as you drift off into a Sunday afternoon nap.