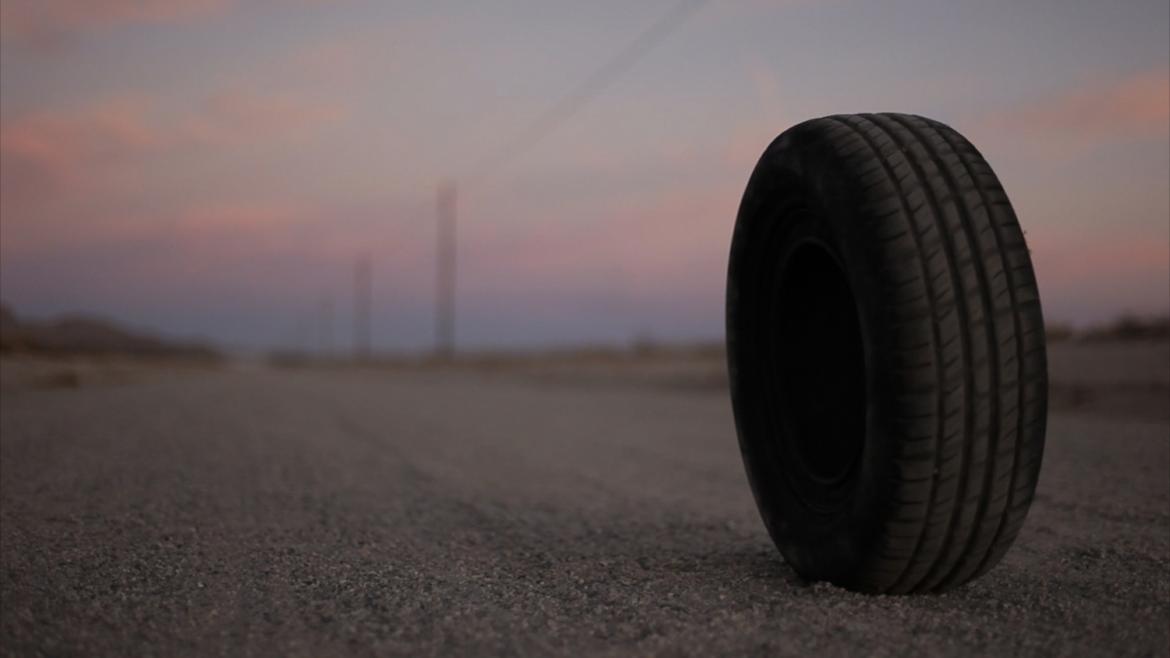 Why would anybody make a movie about a tire that kills people? For that matter, why would anybody want to see this movie? No reason, at least according to the opening of “Rubber”, the ready-made meme of a movie that is poised to become this year’s “Human Centipede” in the sense that explaining the premise to the uninitiated is arguably more fun than actually watching the movie. Said premise: a sentient tire with telekinetic powers stalks a French girl through a dusty desert landscape, indiscriminately blowing up the head of anyone who crosses its path. There’s also a lot of absurdist meta drivel intended to never let the audience forget that they are watching a movie, and an intentionally silly one at that.

“Rubber” hits the road with a sheriff climbing out of the trunk of a car (Why? No reason.) and explicitly stating the central premise of the film. He explains to the audience why ET is brown (No reason.) and why the characters in “Texas Chainsaw Massacre” never go to the bathroom (You guessed it, no reason.) The sheriff then hands out binoculars to a group of audience surrogates who watch and comment on the events of the movie from atop a hill. From this point, the actual movie starts, or perhaps we should say the movie within the movie, but since the movie within the movie (about the killer tire) takes place in the same time and place as the movie outside the movie (about the people watching the killer tire), both movies exist in the same world which we, the audience, are watching in the form of a movie. Doesn’t make sense? Don’t worry, it’s not like there’s any reason for any of this headache-inducing tomfoolery and people’s heads will start exploding soon enough. So what about that tire that kills people, huh? The tire comes to life in a landfill and, after adorably stumbling around for a while like a newborn calf, begins rolling on down the road. It gets its first taste of destruction in the form of an empty plastic bottle which it rolls over with a delightful crunch. Next it encounters a scorpion which provides an even more satisfying squish. For a moment, it seems like the fun is over when a beer bottle proves to be more than a mere tire can handle but it reveals unexpected powers when it quivers in the tire equivalent of David Keith getting a nosebleed in “Firestarter” and causes the bottle to explode. Its first taste of blood comes in the form of a bunny rabbit and from there it’s a quick jumps straight up the food chain to making human heads go pop. The sheriff reappears and organizes a manhunt against the murderous tire. As demonstrated in the beginning, he is well aware that this is only a movie and one sure way to stop a movie is to make sure nobody’s watching. Instead of killing the tire, the sheriff goes after an easier target – the binocular-wielding audience, who have been commenting on the action throughout. He’s not entirely successful in his actions and as long as the audience lives on, the tire keeps killing. Again, don’t worry if this doesn’t make sense. No reason, remember? Ultimately “Rubber” feels like a fun short film that was inexplicably and inadvisably stretched out to feature length. It’s more boring than a 75 minute movie about a psycho psychic tire should ever be and the unending assault of attempts at ingenuity get to be tiring after a while. There are a few bones thrown to genre aficionados in the form of clichés like the boy who realizes what is happening but can’t convince any authority figures and the gloriously absurd horror movie ending which sets up the inevitable sequel, but the film is so damn self-aware that it’s a wonder it doesn’t occasionally pause itself to ensure that everyone saw what it did there. “Rubber” certainly has its moments and at its best it plays as a post-modern mash-up of “Attack of the Killer Tomatoes” and “Scanners”. At its worst, though, “Rubber” tries to be a dumb movie and a smart movie at the same time and never quite succeeds at either.