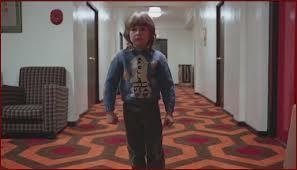 As you probably know by now, the 2013 film “Room 237” is about “The Shining.” But it’s also about obsession, about people who have fallen into a rabbit hole in their minds and can’t get back out again. To them, Stanley Kubrick made more than just a horror film. Sounds interesting, right? As a big fan of “The Shining,” I was really looking forward to this analytical discussion, but unfortunately I found it a bit disappointing and tedious.

“Room 237” is billed as a documentary, but technically it is just a series of monologues from individuals (they are never shown, we only hear their voices). Each explains what they think “The Shining” is really about. One speaker feels it was Kubrick’s statement on the Holocaust, another thinks it is about the genocide of Native Americans. One woman thinks “The Shining” contains hidden Minotaur and other Greek mythological images. Another man shows “The Shining” to audiences while the reverse of the film is overlaid on top of the screening, so people can watch the film forwards and backwards at the same time. The most extreme theory comes from a man who claims “The Shining” is really Kubrick’s confession that he was involved in faking the moon landing.

While all this is going on, director Rodney Ascher shows a plethora of different scenes from movies. He shows clips from “The Shining,” of course, portraying scenes as people describe what they think those scenes really mean (sometimes using arrows to point out what they’re talking about). He also uses scenes from other Kubrick films (“2001: A Space Odyssey” and “Eyes Wide Shut” among others), as well as films that have nothing to do with Kubrick to get various points across.

Each speaker makes his or her case, and you see how they have become obsessed with this film. Each of them feel strongly that nothing in Kubrick’s film was an accident. In their minds, everything was part of the director’s grand vision. A chair that disappears between scenes? A Calumet baking soda can? Just like with other conspiracy theories, nothing here is a coincidence, everything serves some strategic purpose.

Unfortunately, however, “Room 237” can’t keep the viewer interested in this premise, and it’s all a bit of a letdown. First of all, the film spends far too much time talking about things that don’t have anything to do with any of these theories. Ascher chooses to fill “Room 237” with little tidbits of information such as the fact that Jack Nicholson was reading a “Playgirl” magazine in one scene, or a supposedly hidden message to Stephen King in another scene. Okay, but what did these have to do with the theories the speakers are trying to prove?

In addition, Ascher uses his film clips in very tedious ways. Each speaker tells of how they first saw “The Shining” in the theater, and for each story, Ascher uses the same clip of a theater, over and over again. We must see one scene of two couples sitting in a theater ten times throughout “Room 237.” When the speakers talk about walking down a street or waiting in line at a theater, we see the same clip of Tom Cruise walking down the street in “Eyes Wide Shut.” It gets monotonous after a while, and takes the viewer away from the message of “Room 237.”

In the end, “Room 237” seems like a film that is about 30 minutes too long, and would have been better on a DVD release of “The Shining.” As a standalone film, there’s just not enough here to warrant a viewing.