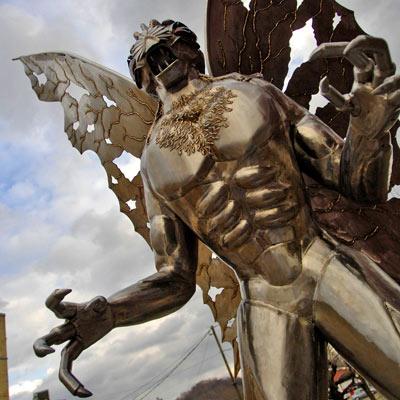 Eyes of the Mothman (Movie Review)

Presumably we have all had terrifying circumstances in our lives that took away control and left us with some sort of trauma to negotiate. Many times people turn to faith or family for help in healing, others therapy, still others drugs and in some cases drug therapy, faith and family. At some point in our process most of us make some attempt to explain the horrible things that befall us by using rational, divine or metaphysical logic. Everyone has heard and in some way accepted a less than empirical form of reasoning from those who have endured tragic events. “Everything happens for a reason” or “It was God’s Will” are well-worn platitudes that help to stabilize the thinking and bring some solace in trying times. They represent functional, sometimes passing belief systems for the besieged mind, but they are also completely assailable as merely subjective methods to reframe that which is otherwise unbearable. To my mind, if a belief in fate or a deity carries someone through terrible things then it matters little whether you can actually prove the existence of such things.

Having said that, when someone invokes monsters, UFO’s or curses instead of God or destiny in order to explain or salve the memory of disturbing incidents, most of us tend to take a more incredulous even aggressive position towards their chosen rationale. But what if these victims are just taking away what they could from a bewildering event and forming into what their mind can manage. Strange people encountered become alien agents, Native American folklore drives the energies of tragedy within a community, and natural anomalies become spiritual denizens who are trying to warn people of impending tragedy. Like the hands of fate and the creator’s design, monsters and aliens somehow seem more personal or morally defined than the often barbarically cold and dispassionate tracing of cause and effect.

“Eyes of the Mothman” is a documentary that has some of these ideas at its core. It is also a crypto-zoological creep fest in the mold of “In Search Of” or “The Legend of Boggy Creek”. The film tells the story and backstory running up to one incredible year (1966-1967) in the life of Point Pleasant, West Virginia. Beginning in November of 1966 residents of this tiny town of 5,000 people started reporting sightings of a strange winged man with glowing red eyes in and around their quiet rural community. The encounters grew in severity but no actual violence was attributed directly to the creature dubbed ‘The Mothman’, save for a missing dog. In 1967, UFO sightings supplanted Mothman as the town’s primary paranormal plague. One night in a nearby community a man named Woody Derenberger was stopped on the highway by a telepathically communicating man calling himself ‘Indrid Cold’. Derenberger would form a bond with Cold and eventually go public with his experiences. Following this, sightings of strange men in black suits and lights in the sky jumped significantly in the area and the residents of this part of West Virginia began to whisper about being the recipients of a full scale alien invasion. Some of this fervor would die down in December of 1967 only to be replaced by the horror and shock of the worst bridge disaster in American History.

On December 15, 1967 the Silver Bridge spanning the Ohio River between Point Pleasant and Kanauga, Ohio collapsed into the frigid waters of the Ohio claiming 46 lives. The tragedy was dissected by engineers and investigators and the cause was determined to be structural failure due to the excessive weight of the cars gridlocked on the span at the time. The public accepted the diagnosis and struggled to move on, but as time passed whispers of ‘Mothman’ and Men in Black involvement began to surface and recapture the town’s fascinations. These speculations continue to the present day driven largely by the fact that following the collapse of The Silver Bridge “Mothman” and UFO Sightings in the area stopped completely and have not resumed with any reliability since.

“Eyes of the Mothman” does a great job of presenting a history of Point Pleasant, West Virginia, placing all the central events of 1966-67 in the context of that history, and then offering a number of interpretations and possible explanations for those seemingly outlandish events. It is also careful not to paint it’s principal players as kooks or simpletons, hitting those issues head on and creating no space for such dismissals. (*The one notable exception in those depictions is that of paranormal investigators, the Frick Brothers. Though this seems to have been done to augment the mystery more than paint them in an unfavorable light*) Perhaps the most praiseworthy feat of Matthew J. Pellowski’s film is that while it affords dignity and credence to every point of view, it also works as an atmospheric creature feature with simple but largely effective dramatizations helping to immerse the viewer in the weird mood of that time and place.

There are allowances to be made; the narration is effective but occasionally prone to clunky verbiage. The SFX and font choices, while in some cases are tongue and cheek, are in other areas revealing of some creative shortfalls. For many the most off-putting element of the whole affair will be it’s 2.5 hour running time. While the movie manages to be interesting and well- connected throughout most of it's story, when lag does occur it really brings the length of the film back into the viewer’s mind.

Overall, this movie manages to do what I talked about in the opening, provide for the possibility that no matter how people frame their traumas or explain their unfathomable fears, their integrity and our respect for them can and should stay intact. Pellowski and his editor never judge or contrive to condescend and because of that we can more clearly see the strength and character of the people of Point Pleasant. Even if what they have reported seems too fantastic, we remain able to relate and empathize. This allows us to accept them and perhaps even buy in a little more freely to the possibility that something incredible did actually happen there 45 years ago. As a horror fan that faint possibility is all that I want from a documentary on crypto-zoological/extra-terrestrial phenomena.