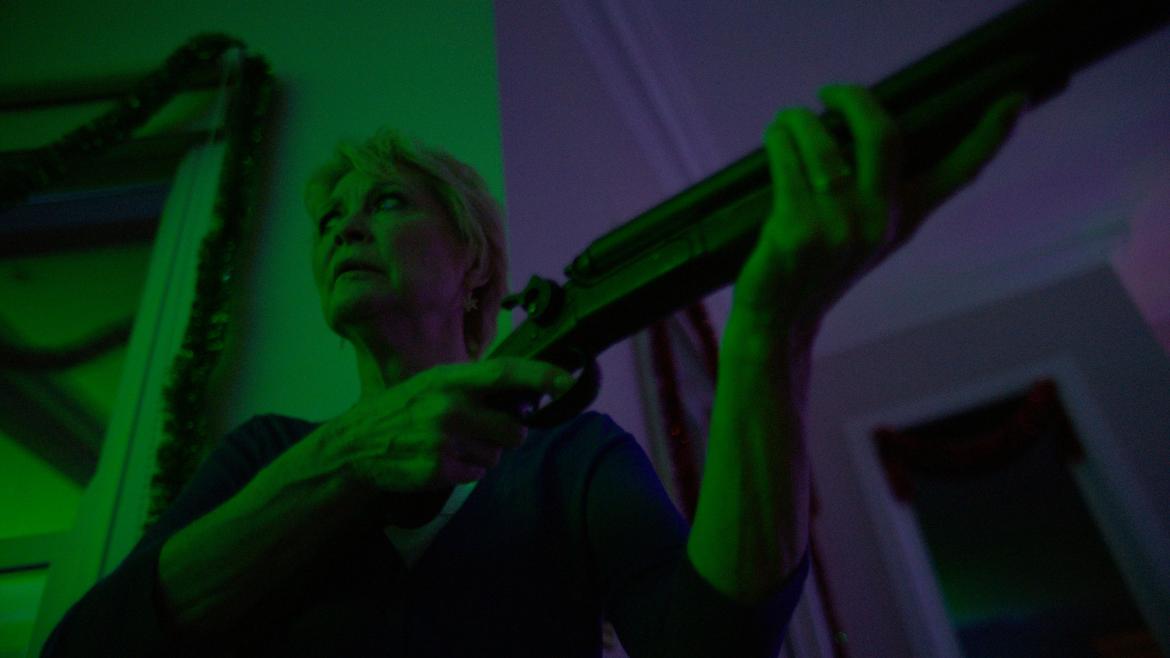 Not every Christmas movie begins with an aborted fetus reaching their tiny bloody hand out of a biohazard bucket, but then again, not every holiday movie is Red Christmas. Yes, Craig Anderson's debut feature begins with a wild curveball from the get go and let's just say as an artist, he's not interested in laying fastballs down the middle.

Baseball analogies might not be the festive way to attack Anderson's film, but Red Christmas is not your typical holiday offering. It unquestionably takes place during Christmas, but don't go in expecting blood sprays in the snow, or a jolly old fat guy prancing around in a red and white jumpsuit. Red Christmas follows a family (led by Dee Wallace) prepping for the big day when a cloaked visitor drops by with an upsetting anti-abortion letter and is quickly thrown out of the house. As the night progresses the mysterious stranger returns, with an axe and no Yuletide spirit.

Admittedly, that sounds like a pretty tame setup for a holiday slasher. What it's missing is some of the surprising and bizarre details that might raise a few eyebrows--even considering how the flick begins. It is better to go in letting some of those details be a surprise, even if they might not redeem the experience as a whole.

Dysfunctional families are certainly nothing new cinematically, and this particular brand makes for ripe fodder for the gore grinder. Practical effects take center stage here as Anderson proves capable of staging a magnificently violent moneyshot. Axes being the weapon of choice, but there are some spectacular splatter moments involving a bear trap and a common household blender.

It'll be easy for gorehounds to be wooed by the gore on display and veg out during the talky stretches where Anderson's script adopts something of a peculiar Christmas anti-abortion message centered around Downs Syndrome. There are actually some profound moments gargling under the waves of bloodshed and D-grade acting as Dee Wallace wrestles B-Horror cheese and deep family drama.

Red Christmas embraces it's cheesy throwback style while injecting it's pro-life agenda amidst the contradicting bloodshed. Anderson's approach at humanizing characters is decidedly uneven and frustrating given the progression in the film's final act. Grim yet cheesy and poignantly bizarre, Red Christmas is a sometimes frustrating tangle of colorful lights covered in blood.