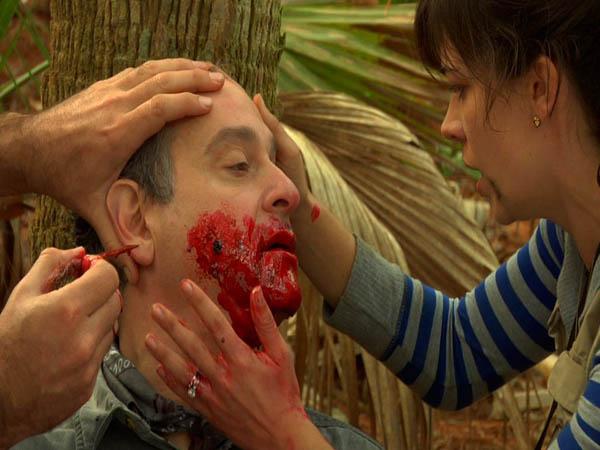 In the world of horror fandom, lifetime passes are way too easy to come by. If you can participate in the creation of two or three good movies, you’re set for life. If you’re a director, you’re free to make terrible movies that would get no notice if not for the name above the title, but dutiful fans will show up because they liked that one movie you made 30 years ago. If you’re an actor, you can make a pretty decent living on the convention circuit, charging $20 a pop for photos and autographs. I’m torn about how to feel about this.

On the one hand, it’s nice that the horror community respects its elders and iconizes people who might otherwise be sacking groceries at Kroger, having left their brief dalliance with show business behind them years ago. On the other hand, the whole cult of low rent celebrity thing can be a pretty embarrassing display of nerdocity. And perhaps the worst side effect of horror film idol worship syndrome is when these horror icons realize how marketable their name is and put money and nepotism over putting out a quality product.

That brings us to today’s film, which bears the unwieldy title of “George A. Romero Presents Deadtime Stories Volume 1”. It’s a terrible film by anyone’s standards (even Romero’s – zow-o!). With one slight exception (more on that later) the writing, execution, acting, special effects… pretty much every aspect of this film, is on a level with the most inept low-budget backyard horror film you can imagine. This is the film where George A. Romero has finally confirmed that yes, he would be happy to stamp his name on any piece of crap that came down the turnpike.

Why would Romero be willing to associate his name with such a shoddy product? It might be because he’s trying to make “Diary of the Dead” look better in comparison, but the most likely motive is that he’s helping out his old buddy Jeff Monahan. Monahan has appeared in Romero projects since “Two Evil Eyes” and he’s the common thread of this anthology, having written all three stories. You might remember that for Romero’s last anthology project he teamed up with Stephen King and brought the world “Creepshow”. Jeff Monahan is no Stephen King. He’s not even a Dean Koontz.

Almost like a warning, alerting people to the fact that they should stop watching this crap immediately, the first segment, called “Valley of the Shadow” is also the worst. It follows a woman searching for her lost husband in the jungles of South America (or maybe Africa – the press materials and the back of DVD box don’t quite agree on this point) who becomes the victim of what is apparently a tribe consisting of one single native who looks like his name might be Chad. It has fantastic dialogue such as the rich CEO (who insisted on coming along on the trip for no apparent reason) who remarks after he can’t get any bars in the deepest jungles of South-America-or-maybe-Africa “When I get back I’m investing in cellular technology. More cells mean better cellular service.” I can hear you now, sir. The vignette also features special effects courtesy of Halloween City and perhaps the stupidest looking twist ending ever committed to DVD.

The second story, entitled “Wet” isn’t quite as stupid as it’s predecessor but makes up for it by being twice as boring. A Zach Gallifinakis lookalike (played by Monahan) living in a beachside cabin lives a life filled with fishing, drinking rum in the bathtub and doing other sensitive manly man type things. One day he finds a box which the film assures us is jade and gold and not a wooden box with a crappy paint job. He finds a decomposed hand inside, but undaunted he just shoves that in his kitchen junk drawer and tries to sell the box to an antique store. Blah blah blah it’s cursed, there's a mermaid, it bites off his dick and turns him into a fish. Oops. Spoiler.

The last segment is the only part of the movie that doesn’t totally suck so it might seem like a masterwork in comparison to the two deuces that have just been squeezed out onto your television set but the reality is that it’s just a fair-to-middling horror short. “Housecalls” is most significant because it’s directed by Tom Savini (a fact that is curiously not mentioned anywhere in the package or press materials for the film). It was actually the first (and as far as I can tell, only) entry into a straight-to-DVD series called “Tom Savini’s Chill Factor”. It’s set in the 1930s and involves a doctor called to check up on a teenage boy who claims to have been bitten by a vampire. It’s a little wonky in parts, like the conversation between the mother and the doctor which lacks any establishing shots and feels like they’re talking to each other from alternate dimensions, but it does have a little bit of atmosphere and the twist might be obvious, but at least it makes sense, unlike the previous two installments.

Finally, I would be remiss if I didn’t mention the contribution of Romero himself. He appears in the closest thing the film has to a frame story. A series of TVs are stacked haphazardly and Romero appears on them, dressed in his spookiest old man glasses and thermal vest combo and reads ghoulish rhymes between stories. At first I wasn’t sure how this tied in with the rest of the film but I think I’ve figured it out. It’s the laziest, bare minimum effort you could possibly put into an anthology frame story and that fits right in with the overall laziness and incompetence that is the hallmark of the film. As Romero himself admits at the end of the movie, “Hmm, that didn’t work out very well, did it?”