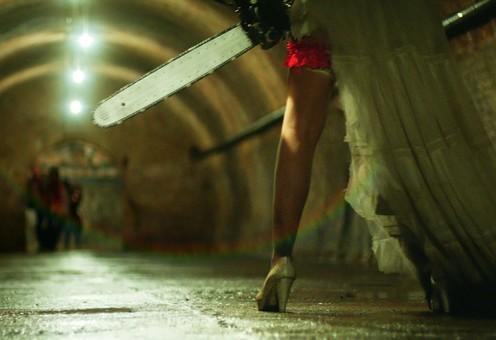 Directed and written by Paco Plaza with co-writer Luiso Berdejo, “[REC] 3: Genesis” is an occasional zombie funhouse that concerns itself with reclaiming the “Fun” of zombie flicks. While the first two films in the “[REC]” series forewent absurdity in favor of their hyper-realistic intensity, “[REC]3” works to incorporate more overtly irreverent material. Indeed, Plaza makes several attempts at undermining the pretentious severity of other more recent zombie narratives in favor of a film that delights in its artifice while maintaining just enough of a grim outlook to keep us uncomfortable. And while this alteration in the series’ formula and the emphasis on a convincing central romance proves to enliven it’s subject matter, the film is also dragged down by sloppy plotting and its attempts at broadening the scope of the infection's implications.

Clara (Leticia Dolera) and Koldo (Diego Martin) are a soon to be wed couple living what seems to be the pinnacle of contemporary romance. Their relationship is presented as nothing short of bliss complete with some of the most sincere smooches and marriage vow serenades this side of impending savage apocalypse. Following the wedding, their family and friends gather in a lavish and at times hilariously gaudy castle to recreate the first forty-five minutes of “The Deer Hunter”. But after much dancing and many drinks, drunk uncles begin devouring aunts and all manner of hell breaks loose. Separated Koldo and Clara search for one another while also trying to protect uninfected family and friends.

Being the third installment in a series that proved instrumental in firmly establishing the found-footage/subjective camera aesthetic (FFSC), it would be fair to assume “[REC] 3: Genesis” would follow a similar style. And for a time it does. We are whisked between a wedding photo-montage video, the Hi-Def camcorder of Koldo’s younger cousin Adrian, the more bouncy grain of a camera wielded by Clara’s sister Tita, and the stedi-cam fueled “cinematic” perspective of wedding videographer Atun.

But after the initial outbreak the cinematography transitions into a more traditional third-person perspective in a rather interesting way. At a point familiar in most films executed in this style, the transition comes when after the initial outbreak Koldo gazes into Atun’s unwavering camera and asks why he is still recording. “People have a right to know what’s going on,” Atun replies. But instead of playing out the argument for the remainder of the film Koldo simply smashes the camera as the title credit splashes on the screen. It’s a moment that might not be the most ambitious in how it’s handled but it is also a gesture at separating “R3G” from its forbearers.

At it’s greatest moments “[REC] 3” nearly captures the unique, ecstatic dissidence of Landis’s “An American Werewolf in London”. The film makes more than a few attempts at setting up a joke or a scare and immediately overwhelms it with its polar opposite. The aforementioned main credit reveal is but one example of this tendency. We see the moment leading up to it, the smashing of Atun’s camera, as a logical reaction. But the gesture is couched in an audacious uncertainty by following the finality of Koldo’s actions with the continuation of the film outside of the FFSC terms. In other words, because of how the film is presented to us up until this moment—from the perspective of camera—and what we may know about the previous two films, Koldo’s actions should have, in theory, ended the film. But by displaying a credit screen immediately afterwards Plaza is making attempts at undermining FFSC expectations in attempts at humor. Other examples can be found in the rather hilarious consistency with which periphery characters are introduced to provide information and then are gobbled up or in the ultimate conclusion that awaits Koldo and Clara.

Though “[REC]3” finds solid footing in its new style and tonal qualities, some of the humor rings hollow and the film’s odd plotting proves spottily constructed. The most glaring example of this comes as more information regarding the outbreak’s origins is revealed. Clara and Koldo’s relatives have devolved into looking like seriously hungover smallpox patients with a hankering for relative meat as the result of more supernatural occurrences. Turns out, a priest spouting fire, brimstone, and all manner of biblical prophecies, well, he wasn’t too far away from right. When glimpsed in reflective surfaces the zomb-ily appears as never-nude emaciated waifs that would put even the darkest days of Lohan to shame. It also appears that reciting bible verses puts the infected into a convulsive, catatonic state. Unfortunately, none of these developments result in a complete-enough conclusion to be satisfying. The priest’s initial explanation of the events is awkwardly presented and seems to come from nowhere, never being alluded to anywhere else in the film.

“[REC]3” also lacks any sort of commentary in relationship to the social world around it. Most of what occurs and where it is occurring—the gigantic wedding that more than one character mentions how expensive if must have been—has little to do with the film’s overall interest. The setting does have more than a little flavor of “The Masque of the Red Death”, but we are not given enough information about the exterior world to draw any such correlations. This is also undermined by the fact that nearly all the characters are presented in ways which ask us to like them, to see them as genuinely friendly, good-natured people (if not a little slimy at times). And while I can’t fault a film for not trying to have a larger critical edge, I was left with the nagging uncertainty that “[REC]3” lacked any sort of guiding themes motivating its characters.

Still, I enjoyed “Rec 3: Genesis” probably more than what I should. The romance between Clara and Koldo was convincing enough for me that I had bought in to their struggle throughout. The ultimate conclusion that awaits the two of them proved to be bittersweet, shocking, and beautifully wicked. It’s a film with more than a few imperfections but its manic spirit and attempts to play with its series' expectations prove engaging enough.

Dave Made a Maze