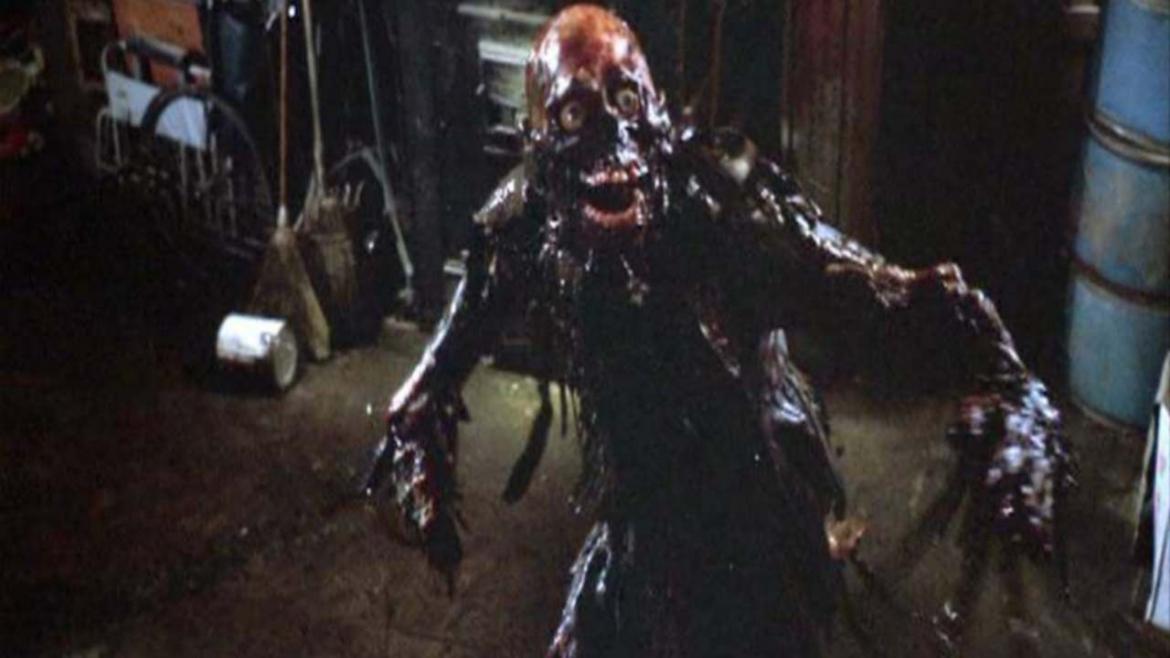 The 1980s saw horror go wild: low-brow and exploitation became mainstream, spoofs and comedies took center stage, practical effect artists went above and beyond trying to outgross themselves, and teen sex was everywhere. Smack in the middle of the decade, The Return of the Living Dead exemplified the best of what 80s horror had on offer while simultaneously changing the conventions of zombie flicks, teen slashers, and cult comedies forever.

At a medical supply facility in Louisville, a manager named Frank (James Karen) lets new hire Freddy (Thom Matthews) in on a secret: the classic Romero film Night of the Living Dead was inspired by the true case of a military experiment gone awry. And, he has proof: the original living corpses, suspended in the very chemicals that once animated them, have all ended up in their facility’s own basement thanks to a governmental blunder. When Frank shows Freddy the evidence, he accidentally releases a corpse, along with enough of the chemical to awaken every other cadaver (including some dissected dogs) in their warehouse. For a time the terror is contained to the warehouse and neighboring mortuary, but when Freddy and Frank make the (very reasonable) mistake of burning a corpse in the crematorium, the resulting acid rain soaks into a local cemetery and all of its inhabitants come alive.

More than just a few good scares and some decent laughs spread out across the same movie--The Return of the Living Dead is very good pop cinema: a funny, relentless gore fest in which Freddy’s band of ‘80s punk buddies collide with a countrified mortician and warehouse owners in their attempts to survive a slew of creatively putrid zombies. Every other zombie flick I can think of picks a uniform design for the starring creatures and sticks with it; here the undead are alternately solid gold, tarry black, bright green or chalk white; some appear wholly human, many are melted skeletons, others just torsos. It’s representative of the movie’s ability to honor a variety of traditions with a loving smirk.

The actors are all sufficiently in on the joke (especially James Karen’s hilarious self-parodying camp; refer to Richard France in 1973’s The Crazies to see where he may have drawn inspiration), and the various subplots take their turns without upstaging each other or wasting time. Even the abrupt cuts between scenes become a kind of meta-gag about the movie’s ridiculousness. The movie is manic, and leaps constantly between a larger than normal cast of characters who split up, reconvene, and dart from setting to setting, but director Dan O’Bannon keeps it all tightly controlled.

We praise groundbreaking movies for being influential, but to be influential usually requires extreme uniqueness: after the fact, paradoxically, we accept no imitations. The Return of the Living Dead is not Psycho, not The Shining, and not even Night of the Living Dead--this is quintessential horror nerd comfort food, a deceptively excellent B-movie that looked at its contemporary landscape and mimicked it perfectly. What it did invent, it did so well that it barely even gets credit (the rumors are true--writer and former Romero collaborator John Russo coined the undead rallying cry “BRRRRRRRAIIIIIINNNNSSSSS” in this movie). If you want to introduce anyone in your life to the limitless subgenres of 80s horror, or enjoy a great flick yourself, put The Return of the Living Dead at the top of your list.