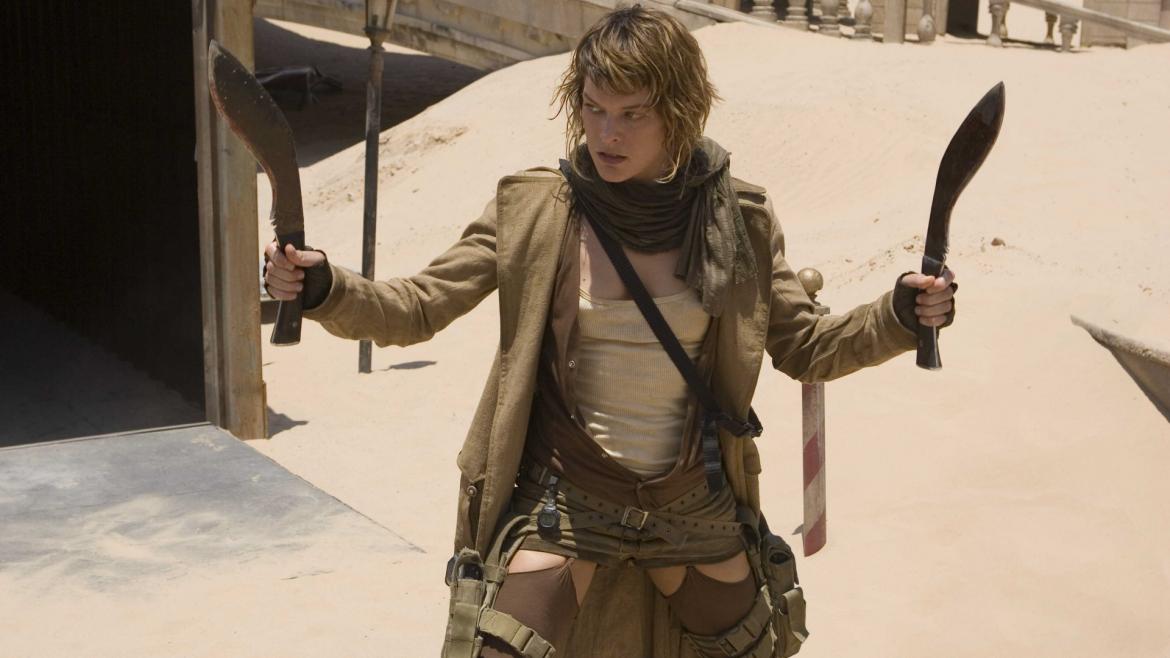 "Resident Evil: Extinction" begins by following two separate paths. First, a group of survivors led by Claire Redfield (Ali Larter) have formed a convoy and drive up and down the West Coast of the US looking for supplies. On the other hand, Alice (Milla Jovovich) has decided to stay away from the group for fear that she will lead Umbrella Corp to them and therefore endanger their lives. Since Alice escaped at the end of "Apocalypse," that nasty little corporation has been attempting to track her using satellites, and continue to monitor her progress hoping she will one day provide a "cure" for the zombie plague. After getting a brief glimpse into each of their daily lives, fate brings the two parties back together and their misadventures form the bulk of "Extinction."

Coming out of hiding proves risky for Jovovich--who at this point seems to have developed almost God-like powers--and her worst fears come true. Dr Isaacs (played by the returning Ian Glenn) finds her on his satellite grid and sets up a trap to lure her to her ultimate demise. For whatever reason (the science here is a bit shaky) he needs her blood in order to truly create the antidote he requires, as his clones of Alice don't seem to be providing any breakthroughs.

I'd be lying if I told you that the plot, or the science in RE: E are really the main draws here. For me, the biggest draw was a sexy woman kicking lots and lots of zombie ass. It was a simple request and if that's all you're looking for, the film delivers in spades. The scene in Las Vegas, featuring Jovovich chopping up zombies left and right with her blades is one of the best action sequences of the year. Every time you think it's over the blood letting continues, and it all ends in a big "oh snap" moment everyone's sure to love.

Following that sequence Jovovich and crew trace Isaac to his underground "Hive" in the Nevada dessert. While some of the convoy have dreams of stealing a helicopter and leaving for a more peaceful place on earth, Jovovich remains behind to settle the score once and for all and tie up the loose ends of the series... at least that's what I thought was going to happen.

Instead we get a decent action-packed ending, an amazing final shot (very "Matrix-esque") and no real answers. It's hard to describe without spoiling too much, but the ending of the film plays to a bigger, better sequel that may never come. Considering we just reported today that Jovovich is out of any future sequels, Anderson managed to write himself a big fat set-up to NOTHING. Perhaps he didn't know of Milla's intentions not to return, but my biggest complaint is that the whole thing feels a lot like "Matrix: Reloaded," instead of the trilogy-ender that we should have gotten.

Despite this, I enjoyed the film a lot and felt that there was more action and coherence to the plot than in the two previous entries. I'm not saying this is rock solid stuff here (a few things definitely had me scratching my head) but they manage to not have the plot so distracting as to make it hard to enjoy the film (something the second one was guilty of).

And for me, Jovovich was the pitch-perfect choice to play "Alice" in this series. She has an uncanny ability to appear tough and menacing, and then to turn around and evoke emotion without even saying a word. I know we like to play up the eye candy aspect of her, but she really excels at almost every role she takes on. I'm looking forward to seeing more of her in the future.

I went back and forth on this movie several times while watching it. The beginning is rather mundane, tracing zombie movie cliches almost shot for shot, but once the crew meets up with Jovovich things pick up very fast. The rest of the movie is solid, and even the ending was pretty good, but I'm finding myself really put off by the open ended nature of the finale. If you're going to end your film with an epic cliffhanger, you better make damn sure your lead actress wants to come back and finish the story. If this is the way it ends, this may end up as one of the most frustrating trilogies ever made. I guess we'll just have to wait to find out. In the meantime, this is a decent way to kick off the fall movie-going season, so I say give it a shot.