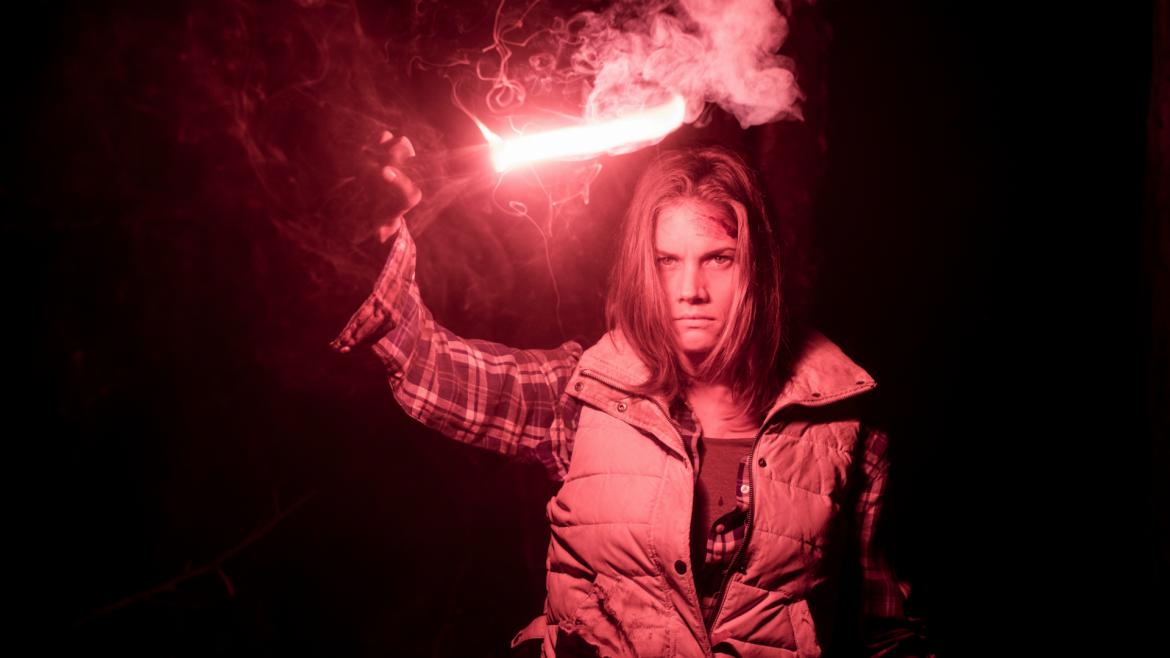 A warning, this review will include some spoilers.

There have been innumerable movies about shark attacks, both realistic and absurd in their approach. Far less common, though not nonexistent, are films about the wild of the woods; movies where bears and wolves hunt our heroes. When first time writer/director Adam MacDonald set out to make Open Water on land, he started researching stories of bear attacks. Much like the film that inspired it, Backcountry picks up as a young couple is headed into the wilderness for a weekend of camping. Alex (Jeff Roop) is a wilderness-lover who wants to share his favorite park with his girlfriend Jenn (Missy Peregrym), who is decidedly not outdoorsy. This dynamic allows for some dialogue that falls squarely into the category that my dad would call 2x4shadowing, where the movie seems to hit you over the head with poorly veiled hints at what’s to come. As they park their canoe for the weekend, Alex picks through Jenn’s bag, scoffing at her bear spray and flair, telling her repeatedly that she won’t need that.

Unfortunately, the plot set-ups early on skew fairly formulaic. A run-in with a passing camper (played by Eric Balfour, inexplicably and not believably sporting an Irish accent) seems like your typical ominous stranger scene from a movie like Wolf Creek, but doesn’t seem to make a lot of sense in the grand scheme of this movie. The scene is handled in such a way that it feels like it wants to create ambiguity about what is following the pair later on, but the posters and plot synopses for the film don’t try to hide the fact that this movie is about a bear. When the pair gets lost, the tension escalates and Jenn yells at Alex, shouting hurtful things at him and asking why he even tried to take her on this stupid trip. It is at this point that Backcountry plays a really tired trope. Alex was going to propose to her on this trip, things are tense and awkward. Many films have used this device as a quick way to create emotional tension and I find that it is almost never useful (the notable exception being The Strangers). Backcountry falls further to the other end of the spectrum, the conflict feeling wrote and not surprising. This scene does set up, however that not only are they lost, but they are without a map or a phone. In the growing darkness they decide to make camp for the night.

The following morning makes for one of the best scenes in the movie, in my estimation. As the two lay sleeping in the glow of early morning, a shadow begins shuffling slowly around the tent. Much like scenes of Jaws’ fin the tension that is built by this scene is expertly done, with the bear getting closer and closer to the tent, pressing it’s face into the side of the tent a few times before wandering off. When the two are eventually attacked, a gory and climactic scene, MacDonald wanted to portray the experience as realistically as he could. It’s this dedication to realism that gives Backcountry its gravity and makes this scene so deeply horrifying. Instead of making nature out to be this unbelievable killing machine that has it out for mankind, MacDonald sought instead to show the audience something could and does happen. In wonderfully-deployed silence, the bear’s head rips through the tent and it starts flashing claws and teeth in every direction. Jenn is able to get away and spends the last twenty-five plus minutes of the movie trying desperately to stay alive and get out of the woods without food, water, or a map.

For a debut film, Backcountry is incredibly ambitious and most of that ambition is met with success. MacDonald did a lot of research to make the scenes with the bears as accurate as he could and used live bears whenever possible. He accomplishes his goal of creating a movie that is, tonally, much like Open Water and that is definitely a good thing. However, Backcountry definitely has its weaknesses as well. The film is one of the “based on a true story” ilk that maybe would be a bit better and more honestly advertised as “inspired by true events.”  The story that MacDonald drew from did include a couple that was attacked by bears, but had a significantly different end. MacDonald said he wanted to change the story a bit to empower Jenn’s character, but he totally missed the mark. Simply having the female character (Jenn) be the only one left standing at the end does not make her strong. The use of this cliche does not make her empowered. The ending scene of the film is equally problematic for me, in that Eric Balfour is, ultimately, the one who sees Jenn once she makes it back; running dramatically towards her in slow motion. To introduce this character as a gross, overaggressive creep, only to have him act as a sort of savior in the end seemed like an odd choice, particularly if the goal was to empower Jenn’s character.

Overall, this was certainly a sound first film, warts and all. For every shaky-cam sequence there is a stunningly beautiful establishing shot. For every poor piece of dialogue, this is an equally good piece and the lead actors have great chemistry. I look forward to seeing where this director goes from here and would certainly recommend you watch this movie, but maybe wait until after your next camping trip.