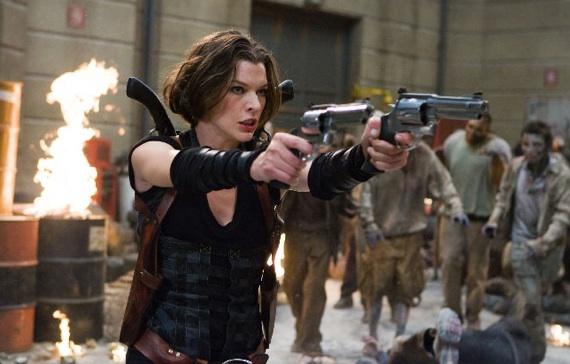 In every way that matters to the people responsible, “Resident Evil: Afterlife” is a resounding success. Thanks to the extra ‘3D tax’ on ticket prices, it had the strongest opening weekend and per-screen average in the history of Paul W. S. Anderson’s franchise. Though “Afterlife,” like 2007’s “Extinction” before it, was touted as the last film in the series, planning on a fifth film is underway.

In every way that matters to the fans, “Resident Evil: Afterlife” is as lifeless as one of the film’s many, many CGI zombie antagonists, equally as brainless, even more listless and completely inaccessible to anyone that hasn’t seen the previous three films recently enough to care. Perhaps the worst of this installment’s sins is that if feels dated in spite of the bleeding-edge technology - the Fusion Camera System used to film “Avatar” and the upcoming “Tron: Legacy” , is also used here.

After a flashback sequence showing a T-Virus outbreak in Tokyo’s Shibuya crossing (with a nod to the original Japanese title of the “Resident Evil” video game series: “Biohazard”), “Afterlife” joins Alice (Milla Jovovich) as she wages an assault on the evil Umbrella Corporation’s subterranean Tokyo headquarters. Heavily armed and facing overwhelming odds, the army of clone Alices that were introduced at the end of “Extinction” engage in an epic fifteen minutes of gunfire mayhem and massive explosions, ending with Alice-Prime (you can tell because her hair is different!) and Umbrella’s Chairman Wesker (Shawn Roberts) crashing a plane into the side of a mountain. Wesker injects Alice with a serum that cures her of her T-Virus imbued superhuman abilities and, just before impact, she thanks him for making her human again. People in the theatre groaned at the line’s delivery.

If “Afterlife” were only its prologue, it would be a much more entertaining film. Its fifteen minutes of mindless popcorn action made good use of the hi-def camera and the 3D effects. It provides some closure for the previous film in the series. In fact, grafting it onto the end of “Extinction” might make for a trilogy that feels unified and complete.

There are still about eighty minutes of movie left.

Following the other dangling plot thread from “Extinction,” Alice tries to find Arcadia, the source of a phantom radio broadcast promising food and shelter and no zombies. Instead, Alice finds abandoned planes and helicopters and is attacked by a mind-controlled, amnesiac Claire Redfield (Ali Larter). In search of the other survivors, Alice and a subdued Claire fly south along the coast, looking for signs of life.
The closest thing they find is a group of survivors holed up in a prison. Led by Luther (Boris Kodjoe), the group is attempting to escape to a tanker ship just off the coast promising food and shelter - the ship is named Arcadia. The bulk of the film follows the survivors’ escape attempt and becomes briefly interesting again during Alice and Claire’s fight with The Executioner (which features the most gimmicky yet fun 3D shot of the film - the monster’s massive axe/hammer flying toward the audience).

Tonally, the prison sequence is a drastic departure from the synths and bullets extravaganza that was the prologue, aiming for a tense survival horror feel that doesn’t mesh with the overall aesthetic of the series. The characters other than Luther and Chris Redfield (Wentworth Miller) are barely cardboard and are only present to pad the runtime with their inevitable deaths. “Afterlife,” much like the other films in the series, is a vanity vehicle for Jovovich, written and directed by her husband, and it wastes little time and less energy trying to make you care about anything that isn’t Alice.

Is there a plus side? Do the words “Ali Larter wet t-shirt gunfight” do anything for you? Otherwise, there are two competently shot, above-average action scenes, the Executioner’s design is neat, evoking a bit of a “Silent Hill” vibe, and Shawn Roberts as Wesker inhabits the video game role so completely that he manages to be laughable and oddly compelling simultaneously. This is the video game Wesker, with all of his terrible voiceover dialogue and implausible powers and if the rest of the movie was as self-aware as Roberts’ portrayal seems to be, it would have been glorious fun.

Unless you’re a die-hard fan of the movie series and need to see what happens next, save yourself the cost of a premium movie ticket and don’t believe in an “Afterlife,” even if it's in IMAX. If you do go, stay through the credits for the surprise return of a character that hasn’t been seen since “Resident Evil: Apocalypse.”