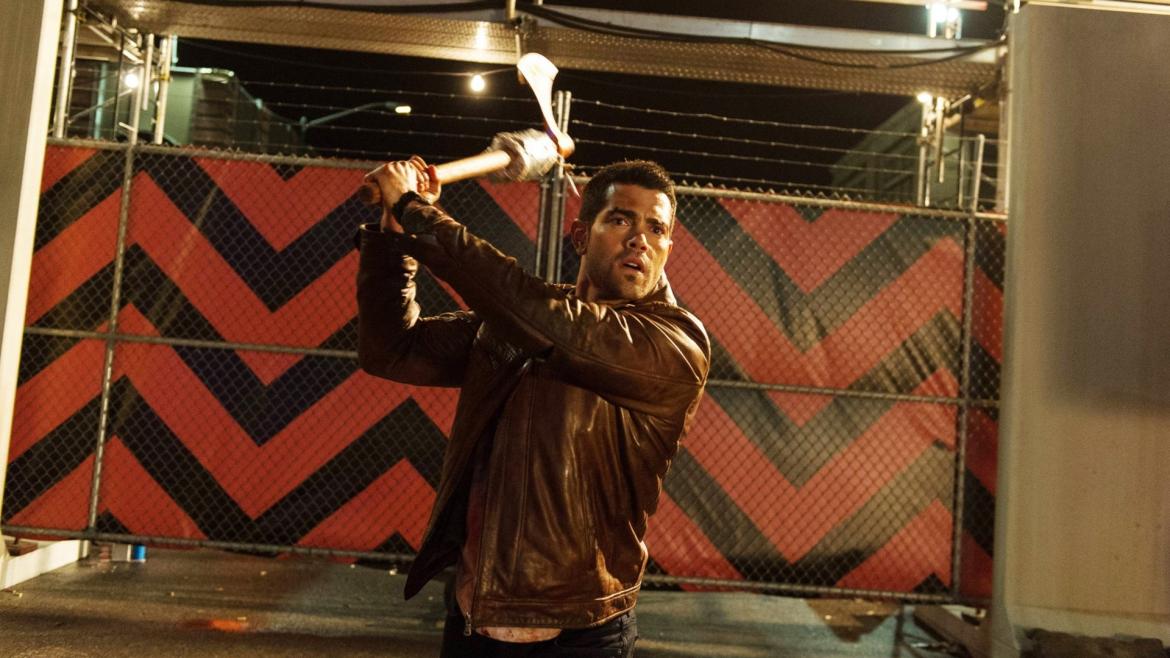 Did you love the melee weapon mayhem of CAPCOM's Dead Rising videogame? Do you love direct to DVD/SyFy production values and commercial breaks? Don't believe that John Tucker must die? Then does Crackle have the anti-Walking Dead saga for you. Dead Rising: Watchtower is a Crackle original production that gathers a handful of D-grade celebrities, episodic storytelling, and a watered down videogame concept for a fun but ultimately flavorless genre gumbo. Which is still mildly impressive coming from the man who inflicted Leprechaun: Origins upon the world.

Instead of adapting the videogame, Dead Rising: Watchtower adopts the world of the game and is set between the events of Dead Rising 2 and Dead Rising 3 videogames. In the film zombie outbreaks occur like mass shootings and Chase Carter (Jesse Metcalfe) is an anxious online reporter eager to get some zombie footage. To do so he's placed himself inside a walled-in quarantine zone full of infected people using Zombrex, a drug that halts the effects of the zombie virus. Chase soon gets more than he can handle when he finds himself at the center of the latest outbreak as the virus begins resisting the effects of the drug.

A fresh take on zombie outbreaks this film is not. It's not even a fresh take on post outbreak life with humans attempting to live normal lives and the role of government in that world- nor does it vividly capture the bleak commentary of news and current events hysteria. The TV landscape already had everything you will see here covered. Either in FX's The Strain (which has nothing to do with zombies) or the obvious, AMC's The Walking Dead- or even its ugly stepsister, Fear the Walking Dead. However, Zach Lipovsky's film is for anyone who favors SyFy camp (more on that in a bit) to the doom and gloom of AMC's programming.

The bigger question that still remains is does Dead Rising: Watchtower at least capture the free roaming fun of the videogame? Yes and no. Sure, Metcalfe and the supporting cast often improvise weapons to use against their undead attackers, but there's only abbreviated moments of pleasure to had from the scaled down zombie massacres. Shifts often occur in the quality of production values that range from relatively skilled to distracting in the worst ways- samsies for the cast. Essentially, there's just not enough here for genre enthusiasts to chew on [insert rimshot]. The film is not plausible enough for old school fans, not bloody enough for gorehounds, and not quite campy enough for anyone looking for some breezy entertainment.

Is Dead Rising: Watchtower the worst thing you can do with two hours to spare? Realistically, no. Even still, two hours is a taxing sit in regards to a campy zombie flick- let alone one with hollow characters and a choppy unfocused script. The film is a significant-ish step up for Lipovsky who essentially earned a lifetime in director's jail for his work on Leprechaun: Origins. Perhaps one day he'll find meaningful work in movies that don't require colons in the middle. In the end, Crackle (aka the safety school of online streaming services) may not have captured lightning in a bottle with their first original horror flick, but at the very least they've dipped into the surface of its potential, which may be more of a puddle than a pool.