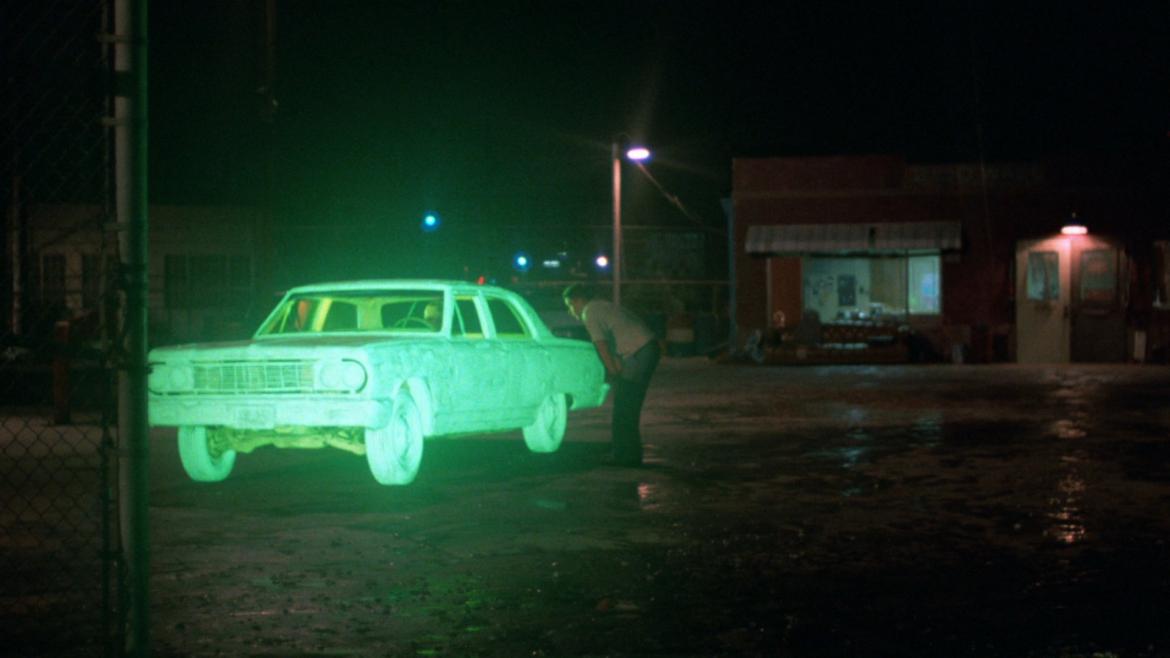 “The more you drive, the less intelligent you are.”

Repo Man is a perfect example of an ‘80s cult classic. It’s weird, doesn’t always make sense, and is a hell of a lot of fun.

Emilio Estevez is Otto, a punk kid fired from his job in a grocery store for being a punk kid. To make matters worse, the girl he’s interested in dumps him for another guy. With nothing to do, Otto wanders the streets of Los Angeles where he meets Bud (the great Harry Dean Stanton) who swindles him into repossessing a car. Otto does well with the task and joins Bud and his wacky team of misfit repo men. Word gets out that there is a 1964 Chevy Malibu with a $20,000 bounty on the scene, and everyone is alerted to it. A crazed government scientist is erratically driving the car around town and the government, Otto and his pals, and other repo men are on the hunt. Unfortunately, no one but the government is aware that the trunk of the car contains an alien entity which disintegrates anyone who comes in contact with it.

This was the first feature from writer and director Alex Cox (Sid and Nancy), and in many ways it feels like it. Estevez does reasonable job considering this was one of his early roles, and Stanton, already a veteran with a thirty year career in 1984, is solid and provides some gravitas to each scene he's in. Some of the other acting is pretty sketchy, though. Much of the dialogue is humorous, but the script could have used more extensive editing. Various weird characters pop in and out for no apparent reason, and it seems as if Cox tried to shoehorn in various conspiratorial ideas that don’t really go anywhere or tie in with the overall plot.

That said, this was a film made on a $1.5 million dollar budget, so imperfections can be forgiven. Though there is a lot of strangeness, this isn’t a movie that’s so bizarre as to be confusing or incoherent. And the weirdness is what gives Repo Man its charm. The effects are simple but get the job done splendidly. Anytime someone opens the trunk of the alien car an eerie glow is emitted (I’m sure this influenced the briefcase in Pulp Fiction) which vaporizes the person, leaving nothing but a pair of smoking boots on the ground. Clever little jokes abound; any food products onscreen are simple white cans which say BEER or FOOD.

Repo Man (not to be confused with 2010's Repo Men) is an entertaining jumble of several genres and ideas. It’s a tale about punk teens, a satire of consumer culture, an alien invasion story, a look inside an underground profession and the sleazy people working in it, and a treatise on conspiracy theories. It doesn’t all completely gel, but the result is never dull. Repo Man provides a nice slice of a short-lived area in American history and cult filmmaking that is all but extinct.