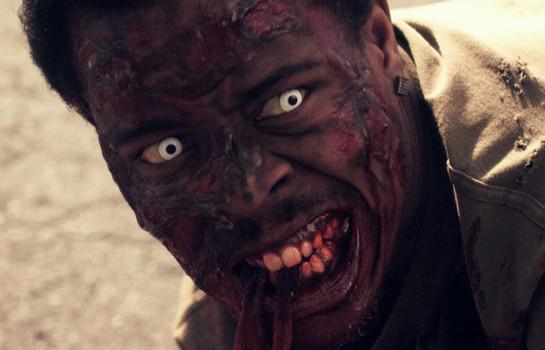 “30 Days of Night” is one of my favorite movies of the 2000's so I was somewhat intrigued to find a low-budget zombie movie that was written by the same author. Unfortunately, the story of “Remains” lacks the clever and frightening setup of “30 Days of Night” that made that movie so unique and enjoyable. In fact, the contrast in quality between the two movies is so vast that it was actually kind of surprising that it came from the same person. "Remains" is a movie that is fairly generic and uninspired, there isn’t a whole lot that actually happens, and on top of that there seems to be no underlying statement or purpose to the film whatsoever. It is a movie that doesn't really commit to either being scary or funny, and it fails on both fronts.

In a lot of ways I feel like when it comes to horror movies, execution is a lot more important than writing, so you could also point to the budget of the film as a key culprit to this movie’s failure, however considering that “30 Days of Night” was as clever as it was, and “Remains” is as bland and purposeless as it is, I can only imagine that this story was made into a movie for the simple fact that zombies are so popular these days and production companies are beating the bushes for every possible script or story that could possibly be turned into a movie.

For what it’s worth, “Remains” does add some unique aspects to its zombies, as they sleep standing up at night, and sometimes they attack and eat each other. This might not sound like much, and it probably isn’t, but fans of zombie movies tend to make a pretty big deal about any deviation from the traditional Romero “Night of the Living Dead” zombie archetype. I can recall both reading and hearing a lot of complaining about the running zombies of “28 Days Later,” and similarly, even more vitriol pointed toward the zombie that rides a horse in “Survival of the Dead” (as if that was the only tiny detail that made that movie Romero’s absolute worst zombie film). However, when it came to this movie, these were such small details that they ended up being almost entirely inconsequential to the plot, that I wonder why the writers even bothered including them. Although I suppose in a sub-genre of horror, where very little changes from movie to movie, even tiny details can seem interesting.

I thought for a brief moment the movie would actually explore some interesting ideas, as one of the characters says something to the effect that, “Even before the zombies the world wasn’t much better,” but it is a thought that was left unfinished, which seems appropriate for a movie that itself seems like an unfinished thought.

The movie starts as a man is having sex with his bitchy female co-worker in the basement of a casino in Reno Nevada, right as a nuclear attack causes a zombie apocalypse. The couple are joined by two more survivors and the group is forced to work together for survival. They run into a second group of more militarized survivors and the two groups soon turn on each other, leaving only the protagonist, the bitchy co-worker, and the daughter of the second group’s leader. The selfish and bitchy co-worker turns on the two remaining survivors and is killed, leaving the protagonist with a slightly less hot, but more caring and selfless woman.

I found this all ridiculous to the point that it almost pissed me off. The reason being that ultimately the message of the movie is that, “good things happen to good people and bad things happen to bad people,” and this is a fact that is so obviously out of touch with reality that it is an idea that has been almost completely phased out of horror movies over the past twenty years. However, if I wanted to play devil’s advocate I guess it would be fair to say that “Remains” is a movie that is simply a fantasy about losing things that don’t matter and starting over (with a hot new girlfriend, of course), and I’m not sure a movie like this, that isn’t trying in any way to make any broader statement of any sort, needs to be anything other than a silly fantasy.

As far as quality the movie is pretty bad. The visual effects and zombie makeup are terrible, the sound is so bad that it seems like the characters are mumbling for half of the movie, and the acting is atrocious. Most of the actors are “pretty people” that you would expect to find modeling underwear or something of that sort, and unfortunately good looks don’t translate into charisma. There is also a lot of humor in the movie that doesn’t really work, but I think with a better budget and more talented actors it could have been pretty funny. There is one genuinely very funny moment where the characters try ramming their way out of a parking garage in a Smart car and they are unable to make even the tiniest dent because their car is so small.

For whatever reason I end up watching a lot of low-budget zombie movies like “Remains” and these are the type of movies that make even the absolute worst episodes of “The Walking Dead” seem like timeless masterpieces. That said, as bad as this movie was I found myself enjoying it, and I honestly couldn’t really tell you why. When the characters are talking I hated the movie, but when they were fighting zombies, I found myself enjoying myself in spite of how poorly made it was. I wouldn’t really recommend “Remains” to anyone, but if you’re a person like me who is compelled against their better judgment to watch almost every direct-to-dvd zombie movie you can find, then “Remains” might be something to check out.