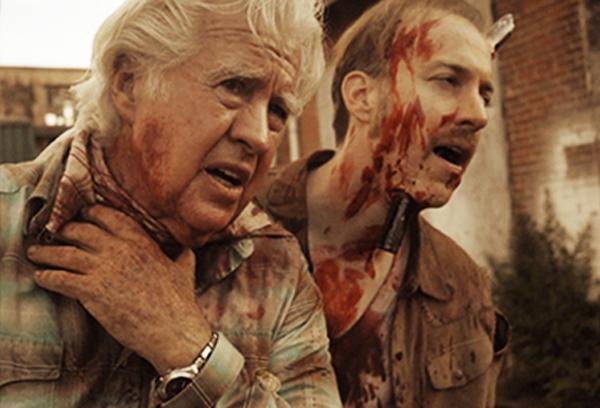 Back in Episode 49 we laid into "Feast 2" with both barrels and proclaimed the movie a fun staple on the over the top gore side, yet light on plot and purpose. Now that "Feast 3: The Happy Finish" is finally here on DVD to finish out the story, they managed to deliver a capstone to the series... by changing absolutely nothing.

In reality, there is not much to say about "Feast 3" that we haven't already said about the previous film. This movie is nearly identical to its predecessor. The movie starts off on the rooftop that the second one ended on, with the characters that managed to survive; Slasher, the biker chick, the Bartender, the sweet and innocent girl, and a couple of topless biker chicks. From there, the movie progresses just as one would expect.

After chucking the midget off the top of the roof via catapult, they go back down stairs and fight their way into the sheriff's office where the town bum had earlier locked them out. Then the monster shows up, people scream and yell 'FUCK!' a lot and things get slimy. There is absolutely no change in the action from "Feast 2" and little attempt at a cohesive plot. Where some may have hoped that this third movie would provide more of a story to cap off the series, "Feast 3" fell far short as it aimed solely to disgust you with its makeup effects.

While they did succeed in topping themselves with some new gross-out scenes over the previous film, we the viewer are still left bored stiff since we have seen it all before. These are the far fetched attacks that we have come to expect from this series, such as the head biker chick attacking a mutant with the wheel of her bike. While you can't fault them for not trying, it was too little since we have already watched an hour and a half of this zaniness last year. The scene where a mutant swallows the recently departed head of Honey Pie and proceeds to shit it out of its stomach bile, while well done and cringe worthy, fell short of the mutant autopsy scene from the second installment. To reiterate once again, "Feast 3" is nothing more that "Feast 2" with a new name tacked on.

While I can get behind some low budget gore fests, the last two "Feast" films have really failed to keep me interested. While watching them, you really get the feeling like you're watching a kid showing off his new toy while in the throws of ecstasy just after purchase. "The Happy Finish" feels like it was made by yet another director who has discovered he has talent in the FX department and overlooks the fact that they forgot to hire a decent writer. Viewing the two films together, it feels like they shot too much footage for the second movie and instead of editing the film down, they cut it in two and attempted to sell it to us twice. All in all, it's a shame since the first "Feast" movie was a such a great setup.