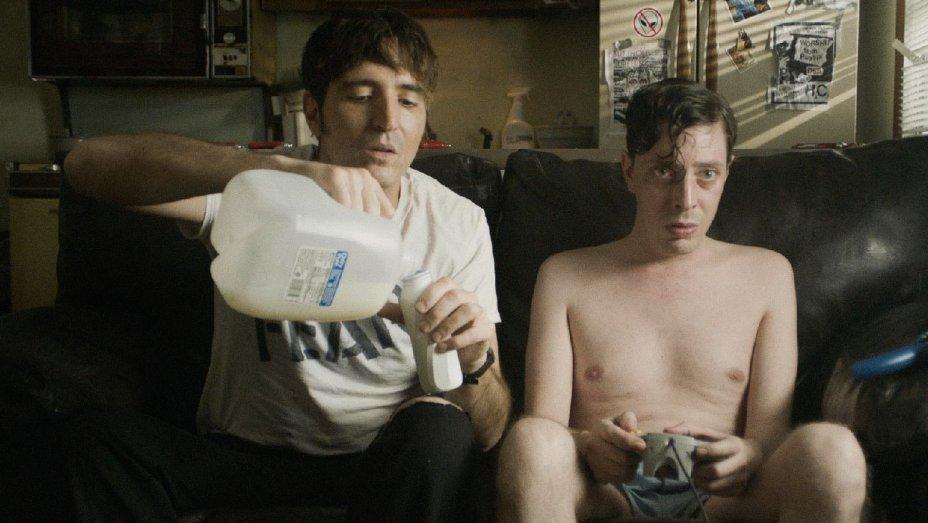 Let's rewind to 1999 during the on-going panic of an impending Y2K apocalypse. It's July, and in one dilapidated apartment in Michigan a man sits in only his underwear drinking spoiled milk from a baby bottle. Off in the distance a man's voice is counting down and before he reaches "one" the man on the couch rushes to finish the sour liquid. These two are brothers and the rotten milk is merely another in a line of challenges that the elder, Cam (David Dastmalchian), has inflicted on his younger sibling, Abbie (Joshua Burge). Desperate to pee, but afraid to abandon the challenge lest his brother inflict bodily harm, Abbie (a nickname derided from Abner), urinates into the milk jug when Cam isn't looking. What follows is an extended scene of Cam pouring from the jug and into the baby bottle as we wait in horror to see if Abbie will partake, knowing what he had done just moments before.

This is our introduction into Relaxer, which for the better part of its runtime is a gross out indie comedy in the context of the Y2K fiasco, which morphs into a feat of mental endurance with moments of genre musings. Cam follows up Abbie's eventual (and disgusting) milk challenge failure determined to give up on the slacker for good and kick him out on the streets. Abbie begs for one last challenge and Cam abides by giving him until the new year (approx 6 months) to complete Billy Mitchel's Pac-Man challenge, to beat level 256 and collect the $100,00 price--a task largely believed to be impossible. The same hurdles apply, Abbie is unable to leave the couch, which, along with the rest of the apartment is coated in various bodily fluids and mounting filth. Can Abbie finish something he starts for once in his life? Or is the Y2K apocalypse going to be the exclamation point at the end of his legacy as a quitter?

Relaxer is far more dense than it seems in passing. The camera is often placed in a single location in the room as it pans slowly while scenes play out, sometimes slowly and brilliantly revealing information to the audience to illicit a reaction. The audience is asked to take in the visuals, but to use levels of analysis typically reserved for material that is, at least in presentation, classier and easier to stomach. Director Joel Potrykus' indie spirit is as undeniable as his messages are layered. Relaxer piles various flavors of developmental trauma with emotional coping mechanisms in a revolting little dessert that's slathered in an antagonistic sibling relationship.

Burge is the centerpiece of Potrykus' grotesque opus, which is constructed in such a way as to make the audience recoil not just at the putrid living situation Cam and Abbie are living in, but at the lengths Abbie will go to prove he's not a quitter. Burge's performance is that of a somewhat developmentally stunted adult drawn to his father who by all other accounts does not measure up to Abbie's idealistic recollection. However, the childlike devotion to a parental figure that others attempt to pull you from is another of the nuances to Potrykus' film, even if it's dipped in vile bodily fluids and presented with no romanticism.

Sections of the film are punctuated by various stomach churning gags like projectile vomiting and splashing feces, so quieter acts of revision. At one point Abbie is so thirsty that he is wiping the glistening sweat from his chest and then sucking on his fingers to quench his thirst. The couch the slacker sits on is moved so an exterminator can search for bug eggs prior to bombing the apartment complex and the surrounding area of the carpet near the couch is so soiled it looks black compared to the nearly white but still dirty area underneath. It's the sort of scene that makes you thankful Smell-O-Vision wasn't employed.

After an hour of Abbie's disgusting MacGuyver techniques Potrykus begins to turn the screws on the audience. The film presents an alternate reality to Y2K as we know it, creating something that diverges in an interesting way while maintaining the indie spirit and never leaving the assuredly sticky confines of the graffitied apartment. Here the filmmaker delivers a bit more in terms of what would land it in genre territory but doesn't take it too far. Still, in the true spirit of indie vagueness the filmmaker pulls back, letting the audience embrace the weirdness and not spoon-feeding his message or sacrificing artistry.

Calling something like Relaxer art is perhaps a stretch, especially given that it's strokes are splattered with a concoction of last night's dinner, urine, and sweat rather than layered eloquently in the finest pastels, but it is still creative expression no less. If you've got the patience and stomach to absorb Potrykus' unique societal perspective through the lens of a sloppy American slacker, then it's considerably more pleasant than prolonged consumption of sour milk, but you'll just have to take my word on that.