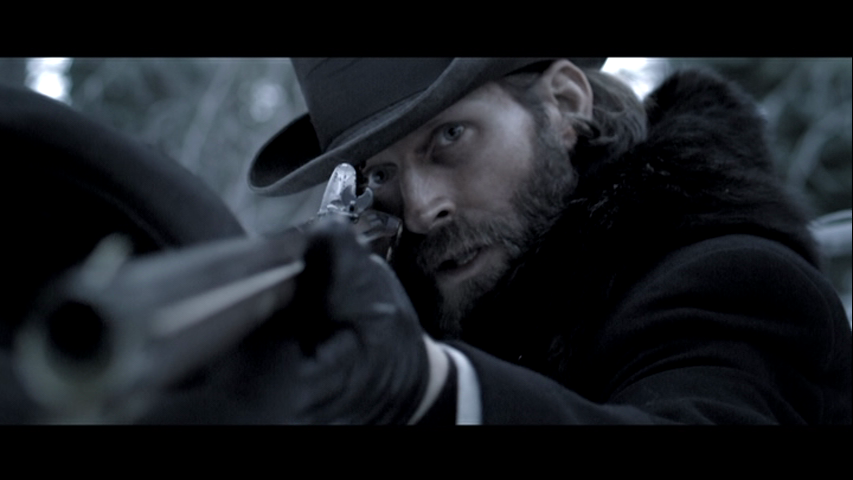 The awful fate of the Donner Party was such an infamous event in American history that it’s a wonder that there haven’t been more movies made about it. In recent years, the closest thing to a Donner Party movie was “Ravenous”, which used the real historical situation as a jumping off point for a completely fictionalized story. The puzzling lack of a dramatization of the real-life Donner Party becomes less of a surprise when you look closer at the story. Minus the lurid sensationalism of the cannibal angle it’s basically just a fairly dull story of hungry pioneers dying in the snow.

I’ve long believed that Crispin Glover is one of those actors who can (and often does) make an otherwise bad movie watchable. The movie might still be far from good but you can usually count on an appearance from Crispin Hellion Glover to bring some welcome weirdness to the proceedings. Maybe it’s the restraints of the time period or maybe it’s the bleakness of the story, but in “The Donner Party” even Crispin Glover fades into the background as just another gaunt, hungry face. When Crispin Glover is boring in your movie, something has gone very, very wrong.

Simply put, “The Donner Party” is a plodding chore of a movie to watch. It’s a history professor’s voiceover away from being indistinguishable from your average History Channel reenactment. There’s no drama, no thrills, and no life in this movie. “The Donner Party” tries so hard to be respectable that it would be more at home being shown in a 10th grade history class than in a grindhouse cinema. The grisly details of cannibalism, which let’s face it, is the only reason people are still interested in the Donner Party today, are completely neutered and glossed over in the movie. People die, are murdered or commit suicide and in the next scene, people sit around a campfire eating stew. I can appreciate the desire for a restrained, classy approach towards a story that could easily be turned into gore porn but surely most of the drama of the situation comes from people having no choice but to butcher, cook and eat their former companions. It seems like it would go without saying but the interesting part of the Donner Party story isn’t where the starving people trudge through the snow.

The problem with the film is that the filmmakers seem to have been so averse to making an exploitative movie that they’ve made one that’s wearied and dull. Their commitment to verisimilitude is strong enough that they filmed on location in the Sierra Nevada where the historical events took place, which makes it even stranger that one of the major things missing from the film is atmosphere. Despite the actors’ best efforts, it never really feels all that cold or miserable. In fact, the setting looks so pleasant and sunny that a few snowboarders ripping up some powder in the background wouldn’t look totally out of place.

I can’t imagine who the target audience for “The Donner Party” is supposed to be. History buffs might get a kick out of seeing familiar events dramatized, but from what I understand of the true story, the film is not entirely historically accurate. People looking for a better understanding of what happened to the real Donner Party will likely only come away with the not-exactly-earth-shattering insight that it was cold and they were hungry. For the average viewer who is mildly interested in the history but mostly just wants to see an entertaining movie, this is bound to be a disappointment.

If the History Channel ever took a page from SyFy’s book and started making original movies, they’d probably look a lot like “The Donner Party”: well-intentioned snoozefests that sound a whole lot more interesting in theory than in practice. What is most shocking is that the film could probably air on Network TV as a movie of the week without one second edited or cut. The last thing I expected from a movie about cannibals starring Crispin Glover is that it would be bland, but “The Donner Party” has about as much flavor as a ghost meat sandwich on Wonder Bread.