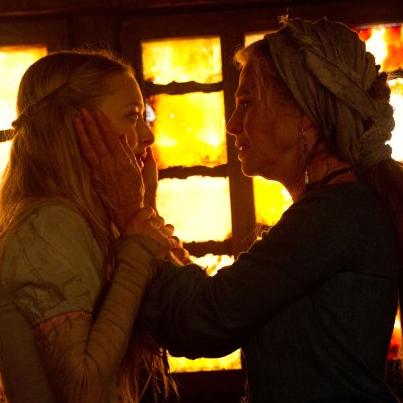 Depending on how you look at these things, "Twilight" was either the best or the worst thing to ever happend to director Catherine Hardwicke. On the one hand, it's "Twilight," pretty much synonymous with printing money at this point. On the other hand, Hardwicke had built a career as a production designer on everything from "Brain Dead" and "Freaked" to "Tank Girl" and "Three Kings." She then helmed two decent indie hits in "Thirteen" and "Lords of Dogtown," before tackling "The Nativity Story," which flopped harder than anyone suspected post "Passion of the Christ." In short, Hardwicke cashed in that indie cred for a decent shot at a paycheck, only to have her chance at truly epic fame -- particularly in the rarified world of female Hollywood directors -- taken away and handed to the odious Chris Wietz.

Even three years out, Hardwicke has to be smarting, or at least should be. And now she has returned with "Red Riding Hood," a film that is only receiving coverage here because the loyal, loving readers of Bloody Good Horror so demanded it. Based loosely around the folk tale of Little Red Riding Hood, the film shows that at the very least Hardwicke can pull together a watchable film. Though it never moves into full fledged horror territory, "Riding Hood" flirts with just enough danger and spills just enough blood to qualify as an honorary member of the genre. It also succeeds rather admirably at following the essential mystery outline that helps justify a monster film. Sadly, all of this is trussed up with a tad too much soapy nonsense. Wayward glances, longing stares and over-dramatized familial strife tend to undermine tension no matter how well the rest of a film are executed.

The essential plot of "Red Riding Hood" follows Val (Amanda Seyfried), a young woman recently betrothed to a wealthy young man from around town who secretly yearns for the heart of a less-wealthy man. Disconnected from time and place, Val's village has been plucked straight out of a storybook, and lovingly so, by the filmmakers. The self-contained group of villagers appear self-sufficient and would go about their days without a care were it not for the pesky wolf who arrives every full moon. There has been a truce with the wolf for the last several years -- the villagers provide livestock to nom on, and the wolf leaves the townspeople alone. That truce is broken when Val's younger sister is killed.

This sets in motion much wistful yearning on the part of Val, who now must deal with her sister's death and the fact that she may have to marry a nice (but totally boring!) rich guy. The (poor) love of her life has never been so close, yet so far. They nearly run away together, but the wolf continue to intercede. And then Gary Oldman shows up with some soldiers to learn these townspeople a thing or two about wolf-killing. This brings us to the end of act one.

Though entirely accurate, all of this description probably does "Red Riding Hood" a disservice. It has, by nearly every measure, too much plot, too much angst, and too much yearning. But taken in the context of the film, most of this stuff at least makes sense. To be fair, Hardwicke does a decent enough job of crafting a whodunit around what Gary Oldman informs everyone is a werewolf. There are a handful of potential plausible culprits, but each is played off the other long enough to at least make the proceedings interesting.

At its core, "Red Riding Hood" really does feel like a fairy tale come to life. The flow has a sort of Disney-film logic, with mysticism and faith standing in for reasoned action. By not specifying a particular time and place, Hardwicke contributes to this feeling of being not wholly connected to reality. But there's no escaping the fact that the film is just soft at its core. Aside from some CGI'ed wolf attacks and implied violence, there's not much to make anyone over the age of 13 squirm in their seat. Had Hardwicke gone for something closer to an R-rating, the film probably could have been darker, bloodier, and certainly more interesting. Sadly, those decisions were likely made in the marketing meetings before any script was even greenlit.

For Hardwicke, the significance of "Red Riding Hood" is that it's not "Twilight." Though she doesn't do nearly enough to stamp "Riding Hood" as hers, the film no doubt has moments of flare and visual panache. If it hadn't been aimed squarely at the 10-17 age group, "Riding Hood" may have been something interesting. As it is, we can all take it as a cautionary tale about what happens when you allow your loyal fans to direct you into the woods without a map to grandmother's house.