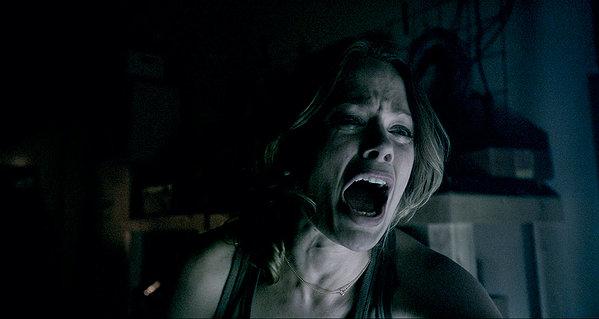 The story of "The Banshee Chapter" is based on a U.S. government conspiracy perpetrated on it’s own citizens during the 50’s and 60’s, under the code-name: “Project MKUltra.” The purpose of the experiments were supposedly to find a way to chemically control the mind and also to find some kind of truth-serum to administer to enemy spies and soldiers. Apparently a plethora of drugs were given to test subjects, many of whom were completely unaware they were being dosed, and according to Wikipedia the tests for some reason also involved: “ hypnosis, sensory deprivation, isolation, verbal and sexual abuse, as well as various forms of torture.”

This film centers around one drug in particular called “DMT,” and since I've been listening to podcasts the last several years, DMT has been a pretty hot topic on a few of the shows I listen to. Proponents of the drug claim that when it is ingested that they are bombarded by incredibly complex and constantly shifting geometric shapes, colors, and patterns. They also claim that they are able to make contact with what seem to be intelligent “entities” who are able to communicate with them about their lives and the nature of the universe.

Apparently it is popular to take the drug by smoking a South American plant known as “Ayahuasca.” People who do this report bizarrely similar experiences where they often see snakes and jaguars. One of the supposed “entities” that is contacted through Ayahuasca is so often a female that the drug or plant is referred to as a “her.” Although DMT occurs in certain plants, it is also produced in small quantities in the human brain, which all makes the whole topic fairly baffling.

Of course the scientists of “The Banshee Chapter” remove DMT directly from one person’s brain and then inject it into other test subjects with disastrous results. The film opens with a young man who wants to test out the government altered DMT and has friend film him. Once the drug is taken the young man seems to accidentally summon some sort of malevolent entity, and he as well as his friend disappear.

His girlfriend, a young journalist, decides to find out exactly what happened to him and she begins to explore the events surrounding the disappearance. When her boyfriend took the drug it somehow turned on a short-wave radio in his house which played the type of music you would normally hear coming from an ice-cream truck and was followed by an incredibly creepy robotic voice of a young girl who is just saying a list of numbers. The numbers seem to be some sort of code that originates from somewhere in the desert. Later on she soon hooks up with a balding, hedonistic author who is obsessed with conspiracy theories. This author is a clear reference to Hunter S. Thompson, and is even named “Thomas” in the film. They, along with another young woman, take the drug, summon the entity, and then set out to find the source of the transmissions. Thomas relates a story to the girl, that H.P. Lovecraft wrote, about someone who creates a receiver and is able to see entities from other planes of existence. He believes that the government altered DMT makes the human brain a receiver which summons these entities into our world.

Visually this film is well done for a low-budget film. It starts out as “found-footage” and turns into the type of hand-held camera “faux found-footage” we are starting to see in movies like “The Chernobyl Diaries” for instance. The film then is inter-cut by found-footage surveillance film and government test film. I actually much prefer this style to just straight forward found-footage because I think these type of movies tend to look a lot better, and they still give the audience the feeling of being an observer within the film. I don’t even know that most viewers will really even notice the rest of the film actually isn't found-footage.

I think the setup for this movie is extraordinarily more intelligent than we get from most found-footage horror films. The subjects of Project MKUltra and DMT are fascinating ones and they invoke the type of mystery that is perfect for horror or science-fiction.
Although the setup and many of the other plot elements are very intelligent, this film is still fairly typical in style, and the story isn't quite as meaningful or complex as I had hoped it might be. The meat of the film is still basically just people running around frantically, monsters appearing out of the darkness, and things popping out at the camera. Заходи в казино slot v и выбери игру на свой вкус.

Although I found “The Banshee Chapter” to be enjoyable enough for a rental, it ultimately falls pretty flat. There are actually some good scares in the film, and the setup is really interesting, but other then that there is nothing that stands out in the film that will
make the movie stick with you once you’re done watching it. As far as negatives go, the film has a completely unnecessary epilogue that I think takes away from the film (although it isn't horrible enough to ruin it). Also the acting isn't the greatest, but that’s to be expected from a film with a low budget, and honestly I wouldn't even blame the actors much at all. I think having someone play a Hunter S. Thompson proxy is fine, but to have the actor try to mirror Thompson’s specific look and quirks is a distracting mistake, especially since many viewers have already seen Johnny Depp do the character masterfully in “Fear and Loathing in Las Vegas” (or “The Rum Diary,” although I can’t comment on Depp’s performance in that film since I never bothered to watch it). Also the lead actress Katia Winter is British, and she comes across as being so straight-laced and “proper” that I think it may make it hard to emotionally connect with the story.

“The Banshee Chapter” is a reasonably enjoyable but ultimately forgettable movie. It’s probably a worth a rental, or worth watching if it is streaming on Netflix, but unfortunately it’s much less interesting than the subject matter that it’s based on.