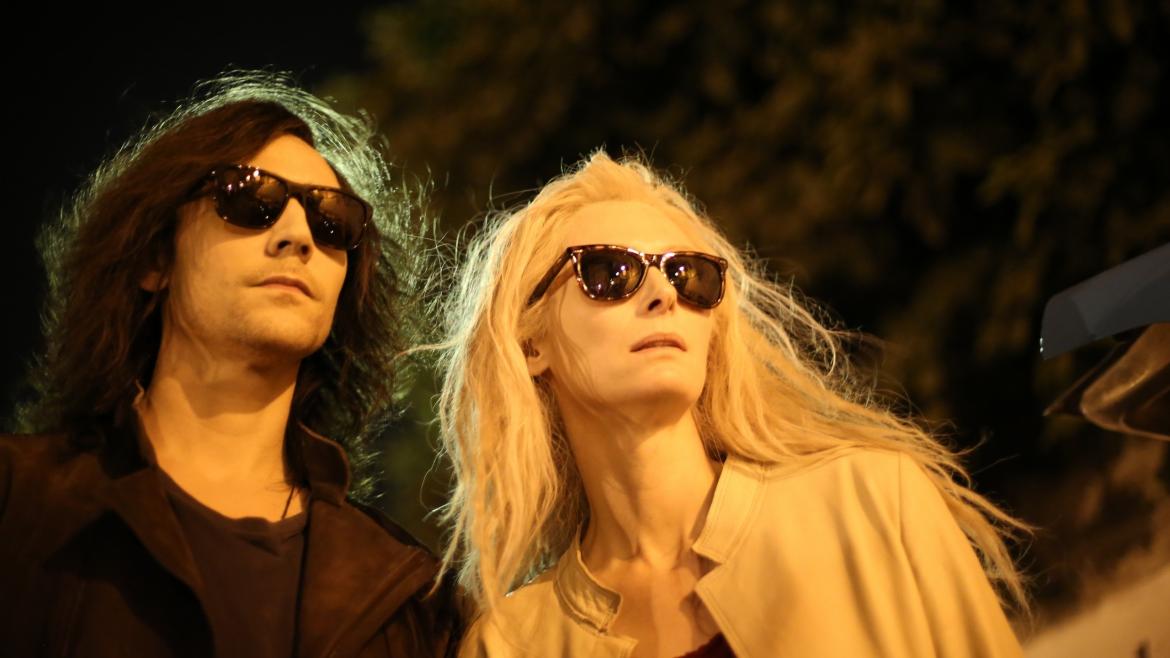 Only Lovers Left Alive didn’t need to be a vampire movie, or even a horror film at all. It’s very easy to imagine removing every reference to vampirism altogether: you’d still have a coherent story about jaded, middle aged addicts who struggle to identify with a world they hardly recognize as the human race pollutes and consumes itself into oblivion. But by making these characters immortal bloodsuckers (who are, yes, deeply in centuries-old-love) Only Lovers Left Alive is able to observe our obsession with self-destruction through a wide-angle lens, and with a deeper store of wit and wisdom than it could have otherwise.

Adam and Eve (Tom Hiddleston and Tilda Swinton) are hundreds of years old--in Eve’s case, probably closer to one thousand--and very much in love, though they live continents apart. Adam, once a composer who secretly contributed an adagio to Schubert, is now a Jandek-like outsider rock musician living in intentional obscurity in Detroit. Eve lives in Tangier, speed reading classical literature in multiple languages and occasionally slumming in cafes, or on the docks, with her best friend, Christopher Marlowe. It’s never made clear why they live in semi-permanent separation; the film leaves it to you to consider the implications of loving a fellow immortal and having the entire planet, as well as yourself, eternally yours to explore.

But due to advancements in public safety, the degradation of the quality of human blood, and the general riskiness of being a walking, talking four-hundred-year-old out in public, Eve and Adam each currently get their supplies from lab techs and doctors and live lives of increasing isolation. Eve takes this more or less in stride. The anonymity afforded to her as an immigrant in Morocco is far less constricting than Adam’s Detroit home, which he rarely leaves and has outfitted with surveillance cameras (apparently some of his more persistent fans have started to track him down). In this inner sanctum, Adam broods on humanity’s capacity for all things terrible--war, environmental contaminants, the ceaseless persecution of thinkers from Pythagoras to Tesla. Unbeknownst to Eve, he has custom-made a wooden bullet to fire into his heart, and rehearses his own suicide on days when it gets to be too much.

Together, Eve and Adam represent two contrasting possibilities left to those who realize the world as we know it will soon be gone. In a wonderful reversal of typical cinematic May-December relationships, Swinton is 20 years Hiddleston’s senior, and the gap between their characters is greater still. At the height of one of their more philosophical conversations, Eve chides a pessimistic Adam: “We've been here before, and you missed all the real fun, like the middle ages, the Tartars, the Inquisitions, the floods, the plagues.” The human species, like their repetitive arguments, have a tendency to revisit the same dark places over and over. Eve’s experience has shown her that people can do, and survive, much worse. Though she never says it, there’s a suggestion that Adam is too short sighted, the vampire equivalent of a first-year college student bent on reading the apocalypse into everything he sees. And yet neither can deny that their lives of late seem irreversibly different. Is the world really ending, or does it only seem that way because it’s ending for them?

If there’s anything suggesting that more immediate changes are on their way, it is a series of casual references to Eve’s sister, Ava, about whom all three main characters have a foreboding dream. Is she alive or dead? Why are mentions of her delivered in such hushed alarm? Why hasn’t Adam forgiven her in the 87 years since they last spoke? When she finally enters the narrative, played by Mia Wasikowska, we learn that she’s not actually Eve’s sister (“But we’re related by blood,” Eve explains, so do with that what you will)--and she’s definitely the vampire version of a cokehead: a manic, fur coat and shades wearing LA party girl who literally never grows up and is determined to just have some goddamned fun at any cost. After the fallout of one weekend with Ava, Adam and Eve are forced to rearrange their increasingly untenable relationship among 21st century humans.

If you’re an auteur with little experience in horror, and you’re looking for a subgenre to dabble in, vampires are an exceptionally high bar. But Jarmusch steps up to the challenge with a wonderfully low-key movie that quietly rewrites conventions and never wears its ambitions on its sleeve. In fact, the film’s pace is so leisurely that it feels like Jarmusch is completely unaware of the expectations that can saddle a new addition to the vampire genre--if so, all the better for him, and for us.

The pacing is excellent, as slow as it can possibly be without dragging once. Jarmusch shoots with a great variety of shot lengths, mixing the long takes without dialogue for which he is better known with sequences containing a greater number of cuts. The cinematography is dark but warm, keeping the shots in Adam’s apartment-turned-recording-studio from feeling as claustrophobic as they could. Most importantly, the incredible soundtrack moves from classy to trippy to moody, drawing on influences from multiple cultures and eras. It all gives an easy, funky irony to what could have been bloated or self-involved.

In the final scene, a strung out Eve asks Adam only semi-rhetorically what the difference between the wars for oil and the upcoming water wars will be--all the while blissful young lovers dance and kiss just yards away. In the face of their own destruction, they choose to persevere. Who can blame them? For all its alarm sounding, Only Lovers Left Alive can’t help but suggest that realizing the world will continue after it’s left you behind may be the greatest apocalypse of all.