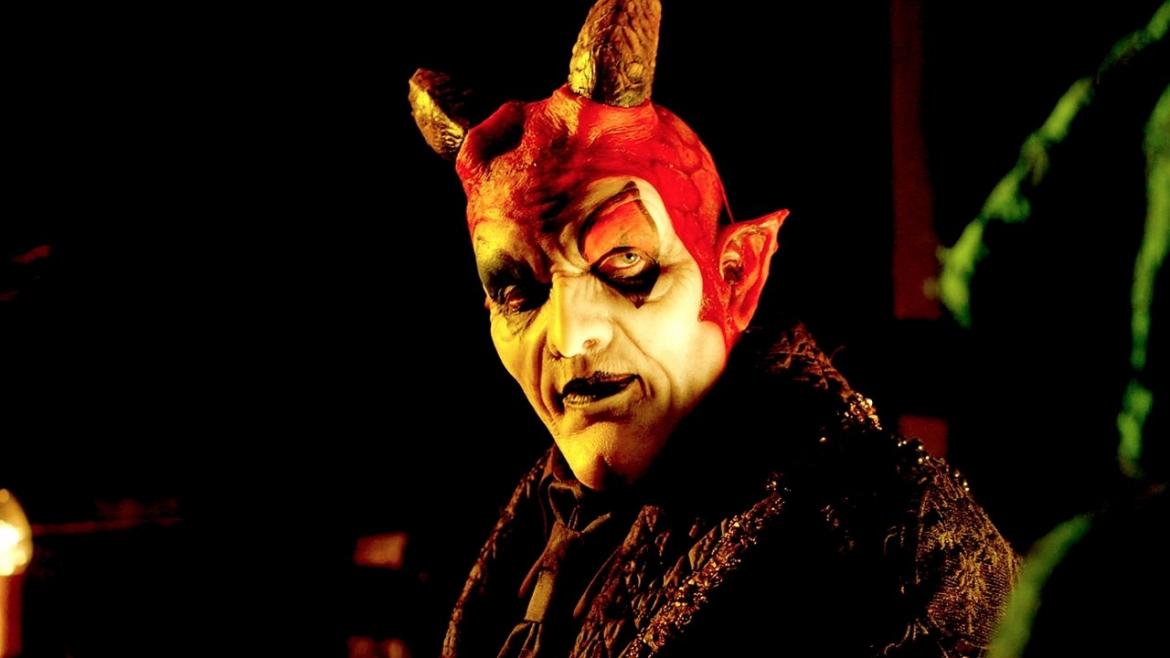 None of the Saw franchise’s many architects have had careers as surprising or diverse as James Wan, who moved on from that series’ grimy torture to direct, among other things, atmospheric homages like Insidious and The Conjuring. But if the stylish horror musical Devil’s Carnival is any indication, one of the lesser known directors of those films, Darren Lynn Bousman, may be forging a similarly original path for himself.

Devil’s Carnival reunites much of the cast and crew of Bousman’s previous musical, Repo! The Genetic Opera, but it’s more of a brief anthology than a feature in its own right. An opening sequence alternates between the deaths of three unrelated people: a grieving man committing suicide; a young woman being murdered by her boyfriend; and a cat burglar killed in a shoot out at her home. All three then wake up in Hell, where their fates are doled out in the form of musical Aesop’s Fables.

I’m game for anything new or weird in a genre that too often repeats itself, but the strange set up isn’t helped by the fact that the punishments and the crimes don’t always line up. The burglar Mrs. Merrywood is forced to enact the fable “The Dog and Its Reflection,” which ultimately just results in her being whipped for her avarice. The young victim Tamara’s punishment draws on “The Scorpion and the Frog” and makes much more sense--until you reflect on the fact that there’s absolutely no reason for her to be in Hell just because she’s prone to falling for violent men. The tale of the grieving suicide does fit the punishment to the crime, so to speak (and who am I to speak out against centuries of religious indoctrination to suggest that the notion of suicide as a mortal sin feels a little antiquated these days?), and since the narrative hinges on this tale more than any other, that’s to the film’s advantage.

But one major technical flaw plagues the movie from start to finish: the sound mixing is terrible. As in, so bad that I cannot believe it wasn’t fixed at any point post-production. Of course this matters in any movie, but it especially matters in a musical, where the songs advance the plot and the lyrics, not the music, tend to be the vehicle for creativity. In one number after another the actors’ mumbles are all but drowned out by horns and carnival sounds, and most of the performers aren’t very strong singers to begin with.

The film’s strengths are all visual, and thankfully, there’s a lot to enjoy here. The cinematography is vibrant, and Bousman and his production team put considered detail into every costume, prop and set. The acting is decent, but no one approaches their work with an energy that matches Bousman’s style, leaving me with the feeling that nobody cared about this project anywhere near as much as he did.

Bousman continues to carve out a unique niche for himself: he followed up Devil’s Carnival with a full(er) length sequel, Alleluia, and he’s recently wrapped a project called Abattoir, also starring Callie, for which he also wrote the accompanying graphic novel. Devil’s Carnival may feel like a bit of a flop on its own, but we need more directors, not fewer, taking risks like this one.