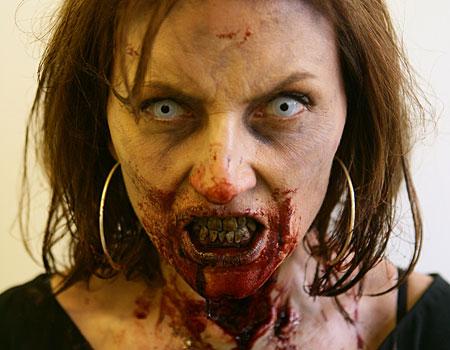 I have a confession to make: there was a time when I was hooked on Big Brother. Not the American version, which I’ve never watched but from what I gather is more of a traditional reality contest like Survivor, but rather the British version which, at its best, was the closest real-world counterpart to the sort of sadism-based entertainment as popularized in sci fi films like “The Running Man” only filtered through a John Waters-type sensibility. The show is fueled almost entirely by schadenfraude and tackiness and even as it scrapes the bottom of the barrel of televised entertainment, there’s also a fascinating sociological element that can’t be denied.

These elements that make Big Brother so captivating are the same elements that make up a great zombie movie. People from different walks of life thrust are together in an uneasy alliance for survival while an inexplicable outside force causes strife within the group. Banded together inside a house they can choose to work together towards a common goal or stab each other in the back to serve their own selfish ends. Granted, the stakes are higher when you run the risk of having your brains munched, but at its core there are some remarkable similarities between Big Brother and a zombie attack.

Created by British writer/comedian/critic Charlie Brooker, the British television series “Dead Set” takes the idea of a zombie attack on the Big Brother house and uses the unique real-world meta aspects of the setting to make possible an oddly believable zombie story. It opens on a live eviction night at the Big Brother house and cuts between the housemates, the behind the scenes action of the crew and a few related characters like the mother of the evicted housemate who is being driven to the studio by a PA. The biggest concern of the crew is that the live show will be preempted by a series of riots that are taking place in parts of the country. Of course, these “riots” are the initial stages of a zombie attack and soon enough the zombie virus is spreading throughout the crowd gathered for the show.

As the chaos rages around them, the Big Brother housemates are oblivious about what is going on and when the lights go out and the cameras stop moving they assume it’s part of just another scheme by Big Brother. Eventually Kelly, one of the crewmembers breaks into the house, which is the only safe place left at the studio. The others don’t buy her stories of zombies in the camera runs behind the two-way mirrors at first, still convinced that she’s a new housemate with some crazy mission from Big Brother, but when a zombie makes its way into the house and kills one of them, the story becomes a bit more believable.

Over a combined 2.5 hour run time, the series hits most of the familiar beats of zombie fiction. Somebody’s going on a supply run. Somebody has the keys to a van… parked on the other side of a mass of zombies. Somebody’s loved one is going to show up unexpectedly. Somebody’s going to get bit and somebody else is going to have to kill one of their friends. At the midway point the Big Brother angle becomes less important and we’re left with more or less a standard zombie tale, but it’s well-done and clever enough to seem fresh. As we have to note in all zombie reviews these days, these are fast zombies, very much in the “28 Days Later” mold. In fact, it’s so similar that this almost feels like a side story set in the universe of that movie. There’s also a surprising amount of gore for a television production.

Some of the uniqueness of the series might be lost for viewers who aren’t familiar with Big Brother UK. Part of the fun is seeing actual former housemates and presenter Davina McCall playing themselves as bloodthirsty zombies. While being familiar with Big Brother is certainly not essential to following the plot, it does ground the series in the real world and makes it stand out from similar zombie efforts. Even if you’ve never watched an episode of Big Brother from any country, if you’re a fan of zombie mayhem, you’ll find plenty in “Dead Set”.

Tombs of the Blind Dead