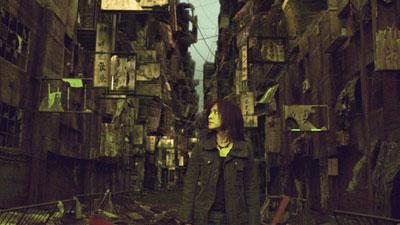 With their skin-crawlingly scary 2002 masterpiece "The Eye," Hong Kong-born filmmakers the Pang brothers (aka Danny and Oxide Pang) helped define the Asian horror genre, giving birth to an endless stream of sequels and rip-offs that, as of this writing, show no signs of slowing. All of their efforts following this memorable supernatural thriller, unfortunately, have been something of a letdown. "The Messengers" and "Forest of Death" were watchable, yes, but neither possessed the creativity or the effectiveness of their breakout hit. And the less said about both "The Eye 10" (aka "The Eye 3") and the US remake of "Bangkok Dangerous," the better.

I suppose it goes without saying that I didn’t expect very much from their highly-anticipated 2006 endeavor “Re-cycle,” a film which, according to some, completely redefined and rebuilt the “creepy long-haired girl” subgenre they helped etch in cinematic stone from the ground up. Did the film shatter, pummel, and obliterate preconceived notions of what Asian horror is capable of achieving? More importantly, did it provide yours truly with the sort of raw, genuinely chilling scares rarely seen outside of Henry Selick’s body of work? Not entirely. That said, it’s certainly a breathe of fresh air, for sure, and a nice step in the right direction.

The film, of course, isn’t without its problems. The first half of the picture -- a surprisingly restrained tale of a successful author’s desire to see a ghost with her own eyes as she prepares to pen her latest page-turner -- is pretty familiar stuff. Long, silent pauses, combined with a handful of calculated jump scares, are presented in a graceless fashion; the brothers Pang, it would appear, are extremely capable of going through the motions with their collective eyes closed. The only vaguely remarkable aspect of the first thirty minutes is Angelica Lee, a solid actress who keeps us afloat through these murky waters when all we want to do is sink to the bottom and forget about the whole generic affair.

Then, suddenly, during the second half of the film, the Pang brothers make an unscheduled attempt to wake you up. Through an increasingly bizarre set of circumstances, our complicated heroine finds herself in a strange otherworldly universe, a place which serves as a home for “the abandoned.” Broken promises, forgotten memories, lost souls, aborted fetuses -- things which have, for one reason or another, have been neglected or disposed of by humans. As per usual with films of this nature, her only hope for escape lies within a nameless girl who has a few interesting mysteries of her own.

Visually speaking, “Re-cycle” is superb, though many comparisons will be made to both the “Silent Hill” video game franchise and its grossly underrated film adaptation. Similarities aside, this ugly, frequently frightening landscape is quite astounding. Once our intrepid author begins to work her way through the Pang’s exceptionally realized world, however, the energy slowly begins to drain from the production. This is especially sad considering how intriguing the premise and Angelica Lee’s fine performance are. Things do manage to get rolling towards the film’s satisfying finale, though it never quite matches that overwhelming feeling of fear and awe the audience experiences once our wordy heroine first enters this strange alternate universe.

All things considered, “Re-cycle” isn’t a bad movie. Is it the untainted shot of bold, inventive, genre-redefining cinema I was led to believe it was? Not quite. While the Pang brothers certainly tried to infuse this choppy supernatural chiller with some much-needed ingenuity, it’s still nothing we haven’t seen before. If you’re able to take a step away from the first plodding 30 minutes, the overall lack of energy, the disjointed nature of the film as a whole, “Re-cycle” is definitely an engaging experience. However, if you’re already sick and tired of Asian-inspired terror, there’s a strong possibility this particular excursion into long-haired fear won’t change your mind. A valiant effort that, at the end of the day, barely misses the mark.