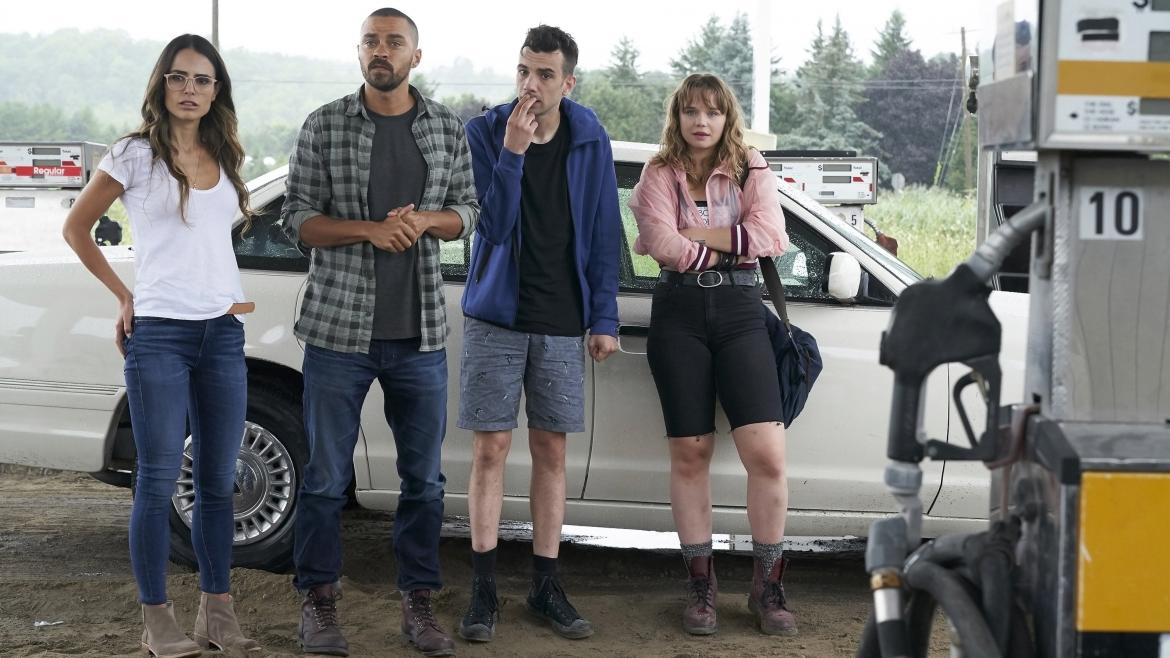 Justin Gray and Jimmy Palmiotti’s Random Acts of Violence was originally published in 2010 as a “one-shot” comic. The short form piece attracted the attention of writing partners Jay Baruchel and Jesse Chabot. The duo were then hired to write the film adaptation in 2011. With little fanfare about its progress or eventual completion over the course of the last decade, the film is finally getting a release. Directed by Baruchel, Random Acts of Violence is a mean little slasher with a chip on its shoulder and a biting if somewhat muddled message about artistic responsibility in relation to sensationalized violence.

The film follows Todd (Jesse Williams) the creator of a popular comic series called “Slasherman” which is based on and inspired by a string of real life murders along a stretch of highway near where he grew up. Stuck on how to end the series, he and his girlfriend Kathy (Jordana Brewster), business partner Ezra (Baruchel) and assistant Aurora (Niamh Wilson), embark on a road trip to his old stomping grounds to do some press for the final issue and hopefully spark some inspiration. But when the group arrives, a slew of brutal murders mirroring the kills portrayed in the comic break out. Todd rushes to decode the cryptic clues given to him through ominous phone calls, desperate to stop the killer before it’s too late.

Having no context to the source material, Random Acts of Violence’s position on an artist’s responsibility for portraying graphic, at times abhorrent material and how that relates to people it may inspire is not always crystal clear. Todd hardly seems to even enjoy the success he’s had with the comic, but he believes in his right to portray whatever he wants--especially since the murders hit close to home for him. Where the script sputters initially is in how Todd attempts to explain his murderous Slasherman as the “hero” of the series, which blurs that line of morality for a creator’s sense of responsibility when taking inspiration from real life atrocity. Whether we’re meant to take Todd’s words as an attempt to intellectualize a conflicted anti-hero or just a boneheaded moment of word vomit is unclear. Still, Williams has many more moments to portray a tortured artistic type and emotional debate with Kathy.

The film has a distinct and brutal meanstreak cutting right through the heart of it. What we have is less of a whodunit in the form of a slasher and more of a collection of scenes of a dude with serious issues slicing and dicing people. The why of it all is what’s meant to propel you through the plot and into the film’s climax. Why is this man triggered by Todd’s comics? Why is he recreating scenes from the comic book? Why is he calling Todd and giving him seemingly random numbers that Todd believes are clues to bible passages? The key to how an audience will go along for the ride may be directly tied to Todd’s charisma, but there’s also a bit of a savage and morbid fascination to how Baruchel’s constructed the story and how it all plays out.

Given Baruchel’s involvement, I think the most surprising thing about Random Acts of Violence is the relentlessly dark tone of the film. After some quick exposition with Brewster and Williams as the anchors, events quickly spiral out of control with little to no room for anyone to step in and break the tension. Baruchel, typically a comedic presence when on screen, veers off course and refreshingly plays it straight outside of some jokey material early on and once things go real dark he plays toward the dramatic better than one might assume.

Behind the camera, Baruchel seems surprisingly in his element with this material—turns out the voice of How to Train Your Dragon’s Hiccup has a taste for the sinister after all. As a director he coaxes and captures great performances from Williams and Brewster. Additionally he shows a flair for staging and setup for some of the more tense set pieces and keeping a steady pace, never letting the audience feel too comfortable from scene to scene.

Brisk and brutal, Random Acts of Violence is a slasher armed with a timely social message—a weapon that’s a bit more blunt than it is sharp, but it gets the job done. Jay Baruchel gives genre audiences yet another voice to keep an eye on in the future.