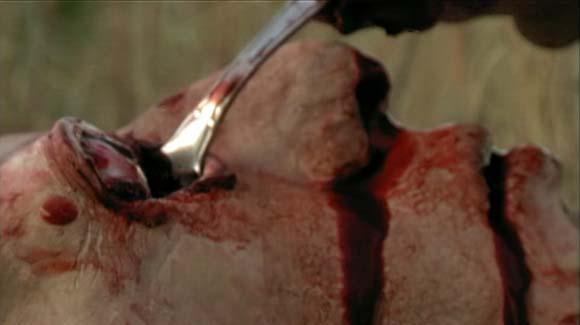 Raiders of the Damned (Movie Review)

There is a special area of cinematic ineptitude so intense that most movies that find their way onto DVD will never even sniff it. It is a place reserved for productions that are devoid of vision, intricacy, production value, craft, acting and engaging story. It is a realm often inhabited by porn productions that out reach their audience’s basic drives, and occasionally by sanctimonious religious films that mistake wholesome for cool. The kinds of films that I am talking about involve no reverence for the cinematic storytelling tradition or the craftsmen who helped to raise it to an art form. They also have neither a spirit of experimentation nor a grasp on what makes low grade productions fun.

As subpar as many direct to DVD horror movies can be it is rare that I see one that falls into the above mentioned principality of poor. What makes this a rarity for the genre is that even the smallest budgeted and most technically underwhelming movies in horror seem to have some sort of good nature backing up their shortcomings. Even the most mistake-riddled genre films often manage to reflect a perceptible drive by the filmmakers to do something fun, nasty, or off-the-wall that will, at the very least, pay homage to the kind of movies they grew up enjoying. In short, small budget horror films typically are made out of a love and respect of horror films.

I feel confident in saying that the guys responsible for “Raiders of the Damned” felt no burden to entertain the audience nor had they any respect the horror genre. The film takes place after a world wide catastrophe has killed off millions. The deployment of a chemical weapon has created legions of living dead that have taken over and are desperate to find a cure to their condition. A scientist named Dr. Wells, who is trying to push them to extinction has been kidnapped and is being held until he agrees to help the dead get what they want. A motley group of imprisoned ex-soldiers have been freed by Wells’ fellow researchers for the purpose of trying to extract him from the lair of the zombie commander.

My film vocabulary feels under stocked to launch a proper assault against “Raiders of the Damned”. This is the poorest attempt to ransack the bank of zombie movie clichés that I have ever seen. I suppose the goal of the producers was to wrangle a little cash by getting C-lister Richard “Booker" Grieco and a bevy of unknowns on the cheap, putting together some slick cover art and choosing an evocative if completely inappropriate “sounds-like” title. The strategy is not new nor is it particularly offensive. But even a parrot studio like The Asylum has more respect for its audience than those responsible for this steaming pile of horse flop. “Snakes on a Train” is like Abel Gance’s “Napoleon” compared to “Raiders of the Damned”.

Going too deeply into detail about the flaws of this enema-thon is as big a waste of time as watching it. So, I’ll hit a few bullet points and leave it at that. The CG herein is the worst I have ever seen in a motion picture. The cut scenes from the original Tomb Raider game for PS One are more impressive by leaps and bounds. Moving on, I will admit to being a little charmed by the retro look of the zombies, at first. The design had me reminiscing about my all-time favorite zombie camp fest “Burial Ground”. That petered out quickly however as the fun make-up gave way to a hybrid look that can best be described as pancake batter bukkake. Richard Grieco’s screen persona is somewhere between Robert Smith and Emo Phillips. The head of the renegade military outfit looks like Barry Bostwick in “Mega Force” (minus the flying motorcycle). And for good measure there is a lifeless discussion about zombie boners.

All of those things should be positives; at least enough to provide the good-humored viewer with a lot to laugh about during the film’s 87 minutes. But “Raiders of the Damned” is hit-your-balls-with-a-hammer boring and plays like a film that is mostly unaware of its cortex-scarring suckitude. I say mostly because there is one zombie swordfight that amuses, if only momentarily. If the producers had cared a little more about the viewer they might have scaled back on the concept and spent more money on casting, screenplay and sound; just some of the little things that help us to lose ourselves in a movie. But spending money was clearly not the plan. This movie reeks of a quick buck at the expense of a loyal horror community.