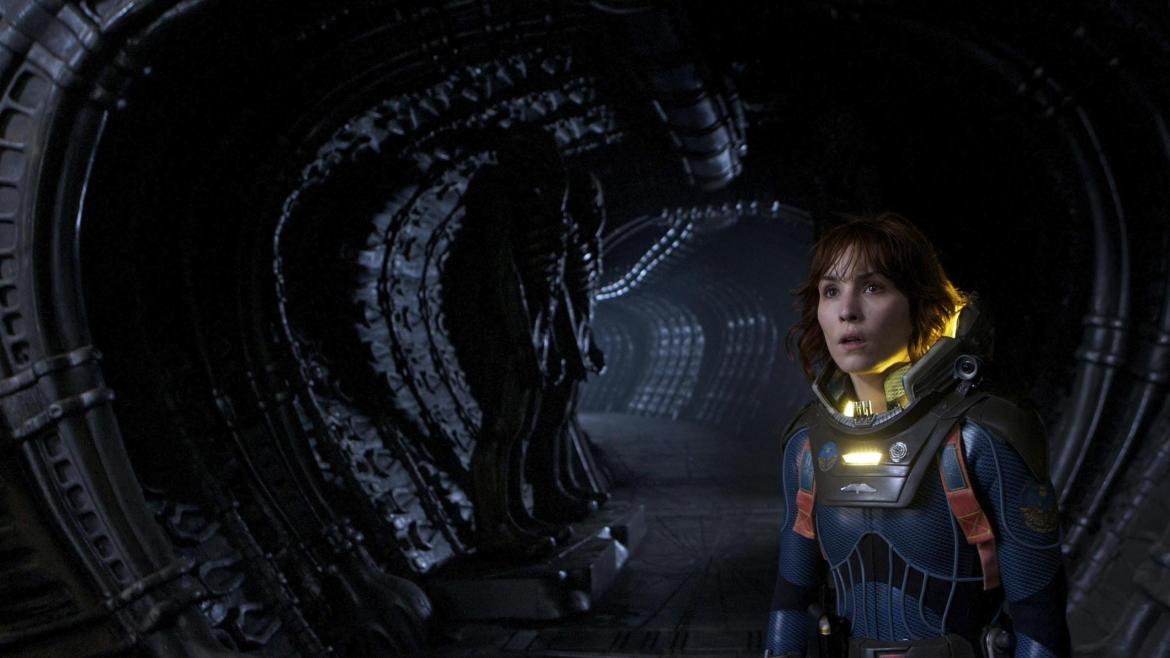 Ridley Scott announced himself on the directing scene in 1979 with "Alien," then followed that now-classic film, with another all-time-great in "Blade Runner." The man could well have hung up his directing hat at that point and basked in nerd adulation into perpetuity. He didn't, instead moving from fantasy with "Legend" to more mainstream films and eventually Academy Award nominees and winners.

"Prometheus" marks Scott's 20th feature film as well as his return to the genre that launched his career. And while his credits include very few true flops, one would not have been out of line for wondering if the director still had his sci-fi fastball after 30 years. The slick and nerd-focused buildup to "Prometheus's" release didn't do anything to lower expectations either. But now that the film's arrived, everyone can breathe a sigh of relief, because it delivers what it promised. Though a few steps below the transcendent genre experience some may have hoped for, "Prometheus" nevertheless has the look and feel of a sci-fi staple that can stand beside Scott's earlier works.

Among the film's weaknesses are the fact that the "Prometheus" script feels as though it's been cobbled together from any of a dozen or so sci-fi films - not least of which include many of the "Alien" or even "Alien vs. Predator" spinoffs. (Aside: Is artistic theft more forgivable when it's from your own oeuvre? We'll come back to that another time.) In 2089, the Wayland Corporation finances a scientific expedition to a distant moon in search of beings that scientists Shaw (Noomi Rapace) and Holloway (Logan Marshall-Green) suspect may have created human life. Their vessel, the eponymous Prometheus, is staffed by a sci-fi rogues' gallery that includes a geologist, a biologist, several ship attendants and Wayland representative Meredith Vickers, a steely capitalist embodied by Charlize Theron. Managing the ship while the rest of the crew is in stasis, David (Michael Fassbender) is a Wayland designed humanoid robot, a precursor to Scott's former robot characters.

Upon arrival at their destination, the crew quickly discovers that their alien targets - nicknamed "the Engineers" by Shaw and Holloway - had certainly been there. But as strange threats begin to materialize, the crew realizes they may have stumbled on more than they had bargained for.

Had they aimed low and shot for cheap, "Prometheus" might still have succeeded as a cheeky sci-fi diversion, such is the genre narrative mastery on display. But Scott certainly didn't aim low, instead deploying some of the most luscious alien world visuals since "Avatar." However, whereas Cameron mimicked the rainforest, Scott broke off a scarred, flinty dessert world. The distant moon never reveals a CGI seam, and the cinematography allows the viewer to truly drink in the sci-fi porn-ness of it all. Similarly, the Prometheus and her advanced technological pieces all pass the sniff test with flying colors. Again, none of these elements will raise eyebrows with their creativity, though it's near impossible to imagine any dyed-in-the-wool sci-fi devotees minding, such is the quality and loving nature of their deployment.

The film (and ship) gets its name from the Greek titan who stole fire from the gods and gave it to man. The original Prometheus was punished accordingly, and as the film progresses there is never really any deviation from this foreshadowed thematic line. The Wayland mission comes to rest entirely on the shoulders of Shaw, with Noomi Rapace aptly channeling Ripley. Though there are several moments where the narrative could have zigged or zagged, the film hews instead to a generic script, and while it is executed perfectly, there does seem to be an opportunity missed -- a risk not taken. In the world of the film this translate to a handful of scenes that could have served as vehicles for climbing tension but were instead played more straight. When characters are "infected" they pretty much just deal with it immediately, through death or other means. The focus remains strictly on the goal of interacting with the Engineers, even when it means foregoing other compelling threads that could have been more thoroughly explored. This flinching from risk culminates with a climactic sequence drawn out enough that it teeters on the edge of collapse and never really delivers any single "wow" moment.

In judging "Prometheus," what becomes most critical is the fact that Scott has created a film whose sum improves upon its parts. While it never makes a leap that would have allowed it to surpass some of the truly classic sci-fi films -- including those from Scott's own history -- "Prometheus" possesses polish and depth enough to spare. Taken as a vehicle for bringing audiences back to the "Alien" universe, the film may succeed as well as any could. Whether it will yet spew forth future prequels/sequels remains to be seen. Concluding as it does with a spaceship zooming away for parts unknown, "Prometheus" leaves the door open, but it also provides a conclusive answer to questions posed about humanity and the spirit alive in the original Prometheus.