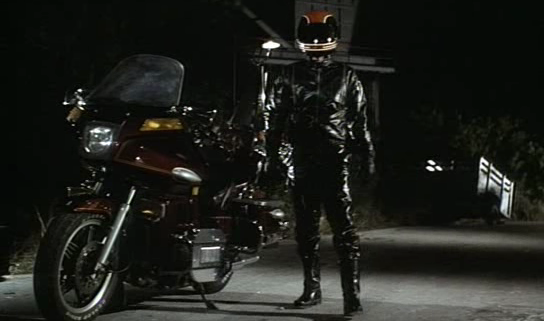 Though the 80’s didn’t launch the slasher cycle, the decade certainly solidified the popularity of the formula. In fact overall those ten years proved to be fertile times for new cinematic trends. In addition to a flood of stalking maniacs, teen sex comedies and their permutations found a firm foothold in the early 80’s; before porn on VHS made titillation a nuisance that could be avoided with a stroke of the fast forward button. The first sub-cycle of the teen sex romp to falter was the small cache of spring break comedies that lived and died from ‘81-‘86. “Where the Boys Are ‘84”, Sean S. Cunningham’s “Spring Break”, the Johnny Depp dud “Private Resort” and “Hardbodies” are all part of a catalog that spans only a few years and probably still died far later than it should have.

One thing that I have learned as an Italian exploitation fan is that you don’t tell the masters of sleaze when something is over. They will pound a trend into mulch then run it back through the wood-chipper just to make sure there is no juice left. Spaghetti splatterist Umberto Lenzi fashioned the cannibal film sub-genre by reworking the sleazy mondo films into a (more) fictional narrative. Lenzi also gave us one of the first contagion zombie films in “Nightmare City”. So innovation or at least the novel tweaking of conventions was a strong suit for the old Grosseto gruemeister. In 1988, Lenzi and his crew must have thought that the spring break cycle was due for a resurrection so they decided to wed wet t-shirt hedonism to a serial killer plot under the south Florida sun.

“Welcome to Spring Break” aka “Nightmare Beach” begins with the execution of a murderous biker named Diablo who is the leader of the Demons biker gang. He maintains his innocence to the end and vows revenge on those who have condemned him. Nothing draws the kids to Florida like an execution; that is nothing other than spring break. As luck would have it Diablo’s zapping coincides with ‘The annual migration of the idiot” as besotted medical examiner Doc Willet aptly puts it. Co-eds start stripping down to sling shots and torn-tees, the waters of the Gulf Stream ferment into cheap beer for a week and our heroes Skip and Ronnie hit town eager to “bump short hairs” and drown in Milwaukee 1851.

Skip Banacek is a college QB who threw a late interception that cost his team the Orange Bowl and he’s still a little morose over it some 3 months on. His buddy Ronnie is a self described pussyhound who tries for ten minutes to cheer up Skip then heads out to a get rejected by every female in Manatee Bay. Picture a Billy Mummy impersonator and a homophobic, closeted Mario Lopez and you have the duo that will carry you through 45 minutes of the film.

“Welcome to Spring Break” should be a lot more fun than it is. The biggest problem is that Lenzi and co-writer Vittorio Rambaldi didn’t choose a path. The movie is a dash of “Nerds in Paradise”, a smidgeon of “The Destroyer” and a helping of “Miami Vice”. In fact, Skip uncovers Ronnie’s body in the same sand pit where The Nuge’ tried to rub out James “Sonny” Crockett in the unforgettable season 3 episode “Definitely Miami”. Well, it’s unforgettable for me, anyways. What isn’t unforgettable is the first 45 minutes of this film. Despite being the bastion of almost all of the nudity, the first act is underwhelming and light on momentum. By the time the gore rolls to a hilarious ooze the viewer might already be convinced that the entire film is nothing more than a show case for the 1987 Pontiac Sunbird convertible. All the Armored Saint and Keel tunes in the world can't make that car desirable.

There is a reason that the spring break films petered out fast and have not been revived on more than a one-off basis. They suck. Really, the fun and nostalgia maybe good for a few minutes but drunk college kids are not interesting to anyone other than drunk college kids. And even those kids would probably rather go to spring break than watch it. If Lenzi had bothered to sit through “The Rosebud Beach Hotel”, Monique Gabrielle notwithstanding, he would have probably accented his T ‘n’A with more DNA early on.

While it is not without its small joys “Welcome to Spring Break” just isn’t worth 92 minutes. If some out of work editor wanted to pare the film down to 70 minutes and trim off the dangling threads it might be a decent film to do your taxes by. Of course that would require finding someone who cared more about this film than its director did and that seems unlikely.