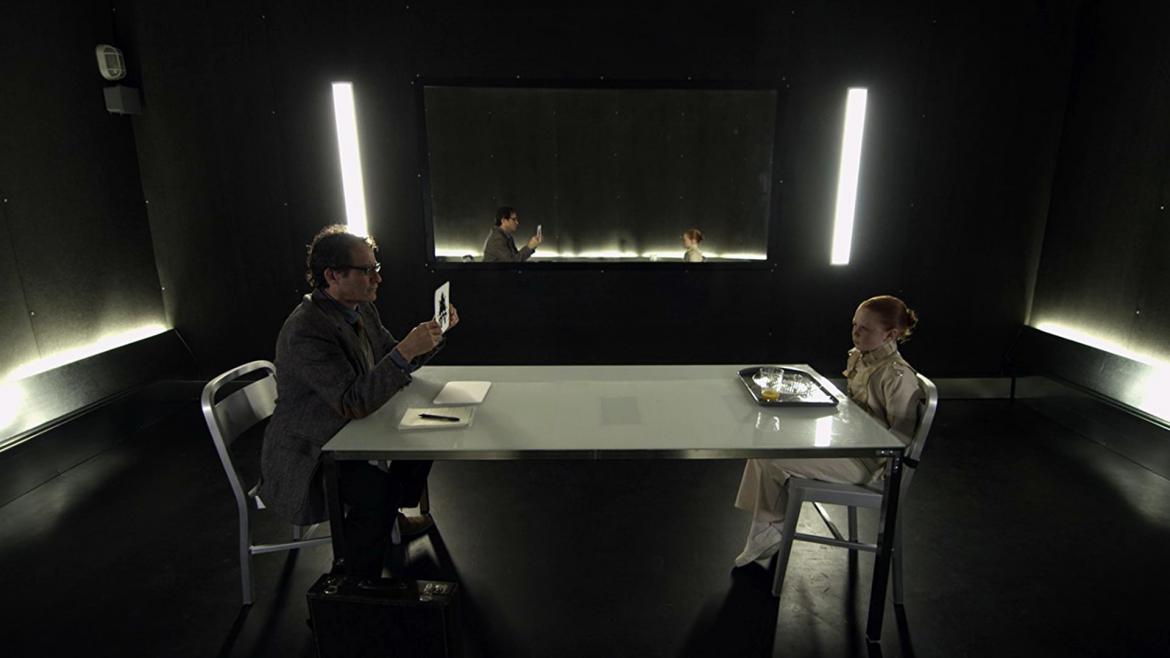 The word "prodigy" is defined typically as a person, especially a young one, endowed with exceptional qualities or abilities. Cinema is filled to the brim with these types of stories, so Alex Haughey and Brian Vidal's feature is already humming a familiar tune. But this time the prodigy in question is a red headed demon child with a dangerous superiority complex. What follows is essentially 80 minutes of a psychologist attempting to make a 9-year old girl cry.

As dismissive as that previous statement might sound, a chunk of Prodigy's run-time is the 9-year old, Ellie (Savannah Liles), trying to rattle the cage of her captors including the latest psychologist, Fonda (Richard Neil). Fonda is the last ditch effort by Olivia (Jolene Andersen) to appeal to the humanity within Ellie before it is decided to put the youngster out of her misery so her brain can be studied. Why? Well, Ellie not only developed an intellect that overshadows everyone around her, but she posses dangerous supernatural powers. She's ended up imprisoned in a government facility after the death of her mother, which Ellie was responsible for.

Being ultra low budget generally sets the stage for actors to come at the audience with their A-game. This collection of thespians isn't quite typical of the latest indie talker and instead plays more like old school horror and sci-fi. There are hints of nuanced performances, but largely the quality dips into local theater. The more surprising outcome of its perceived lack of big names and obvious cash is how well Haughey and Vidal make the most of what they've got. Youngster Savannah Liles and veteran Richard Neil spar off each other very well, yet their weaknesses bubble when it's obvious they are pushing their reactions and dialogue a little too far.

Confined in two main locations for a majority of the film the story hinges on the interactions of the two leads. This dynamic is ripe with predictable cliches, but the psychological tug-of-war is no less engaging. By playing with broad-strokes classic psychology the film achieves a sense of joy in watching the good doctor have eureka moment after eureka moment over his judgemental overlords. From Ellie's perspective there's a morbid sense of curiosity to her character as she verbally toys with Fonda's rudimentary psycho babble tests and confidently trash talks during a tense chess match. It's clear Ellie is meant to be the 9-year old embodiment of a Hannibal Lecter with telekinetic powers. While not nearly as enigmatically terrifying as Anthony Hopkins, Liles plays her cards well enough through this brisk indie thriller.

Even by indie standards Prodigy is the little guy on the totem of low budget cinema. With a lot of chips stacked against them, Haughey and Vidal navigate their gameplan skillfully, switching gears at opportune times to keep things from getting too stale or melodramatic. Prodigy may just be a blip on the indie cinema radar, but it's a blip worth checking into if only to support a pair of promising voices on the rise.