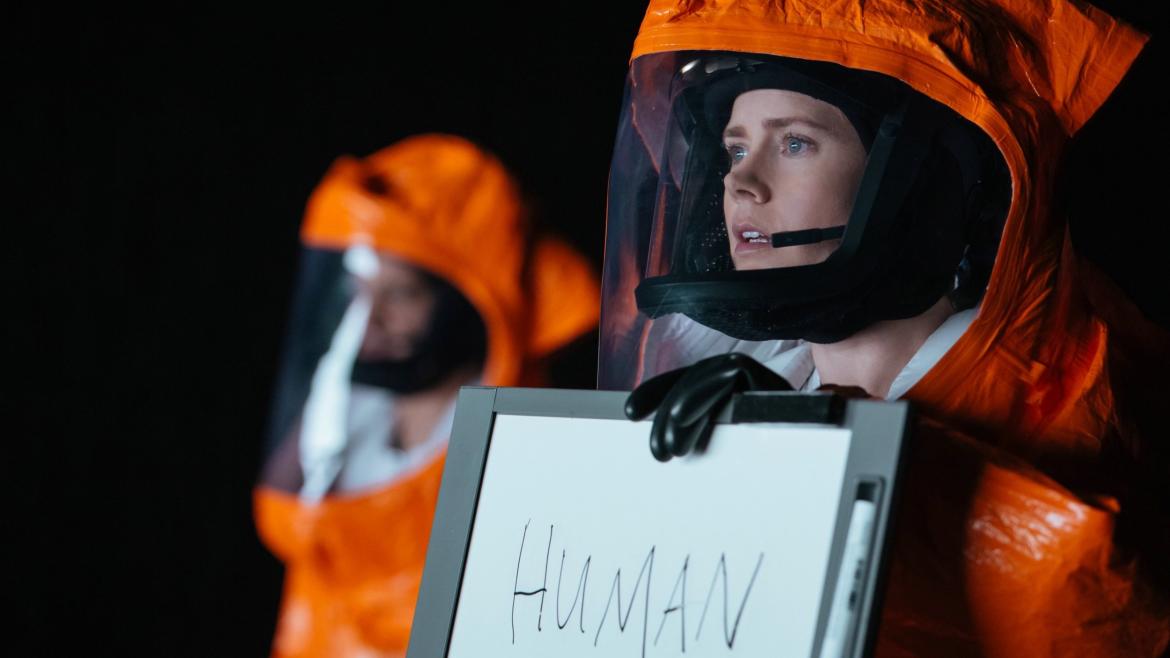 It’s easy to tell what an alien race wants when it turns up with laser beams a-blazing. What if one gets here and its intentions are less overt? That’s the central idea in the smart and emotionally-stirring Arrival, a sci-flick about humanity’s response to and interactions with the aliens who inhabit 12 coffee bean-shaped spacecraft that land all around our planet. Did these interplanetary beings stop by for a quick chat about the weather? Or did they mosey over here to negotiate humanity’s unconditional surrender to our new alien overlords?

The rush to connect with the aliens and decipher their language thrusts linguists around the world into an unfamiliar position as the center of attention. In America, it’s mild-mannered Dr. Louise Banks (Amy Adams) who’s selected to communicate with the aliens at our landing site. Banks is very good at her job, she’s worked successfully with the military in the past, and she also has top secret clearance that hasn’t expired. We’re clued in to Banks’ backstory as a single mother who just lost her daughter through a heartbreaking opening montage. The journey through their years together, through the highs and lows of their relationship, is very reminiscent of a different and not very sci-fi film: Pixar’s Up. It’s a beautiful sequence which works as kind of a covenant with audiences that, even though the film won’t shy away from indulging its more technical and procedural aspects, it will never lose sight of its human side.

As mentioned, America is just one of 12 landing sites. Some of the countries the aliens have chosen to drop in on aren’t exactly renowned for their … let’s call it levelheadedness. Director Denis Villeneuve and screenwriter Eric Heisserer wring a good deal of tension from showing how different countries approach their aliens and the risks inherent in each approach. As misunderstandings and fear push the world closer and closer to war with the visitors, it’s a country that likes to think of itself as levelheaded that, at one point, almost seals the deal for the worst.

Working alongside Banks is hunky theoretical physicist Ian Donnelly (Jeremy Renner) and gruff but fair Army guy Col. Weber (Forest Whitaker). They each do a fine job in their roles, but Arrival is really the Amy Adams show. She delivers an excellent performance that walks the line between tortured mom and overworked savior of humanity. Her relationship with her little seen daughter is key to the movie’s emotional core and as such nearly all of the heavy-lifting in building and elevating this relationship is entrusted to Adams, who succeeds brilliantly.

If you like smart, complex sci-fi stories, Arrival is nothing short of a must-see. You’ll have plenty to indulge in as Adams and Renner’s characters explore the intricate structure of the alien’s language and how that structure influences the way they view the world.  If those kind of stories aren’t necessarily your thing, don’t immediately write off Arrival. The movie’s heartbeat is strong enough; the questions it asks about life and its value are compelling enough, to give it a much wider appeal.