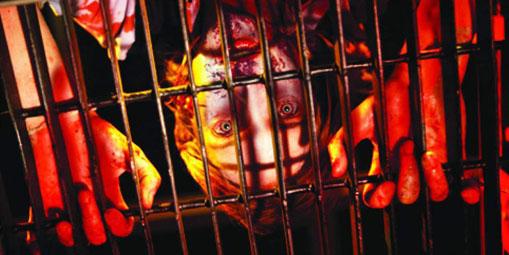 I love gimmickry in films. More specifically, I love it when filmmakers (or a marketing department) make aesthetic choices on the inclining that maybe we will chuck a few more dollars their way. And I don’t mean this in that snarky, cynical, cinema is a beautiful unique snowflake-unicorn kind of way. Sure, what starts as a gimmick can quickly become convention and open up new and interesting ways to tell a story or convey an idea. But what I really dig about gimmicks is their capacity remind that you as an audience member you have a choice to think of a film as an object that works to structure your perception of the events on screen and subsequently the world you live in. Which is probably why gimmicks have found such a cozy home in popular horror film, a genre that is always open for conversations about the “how” as well as the “what”.

And indeed, the gimmickry of both “REC” and “Quarantine” is by far the most compelling thing about these films. The fast-zombie-virals had been a long time coming before these films came out. But to have them portrayed from the perspective of a news camera, visually and aurally, kept me engaged, alert, and honestly curious. These are films that rely more so on the experience of sensory duration than on the actual concerns of character empathy and motivation. They are films I would imagine William Castle having a great time at.

However, “Quarantine 2: Terminal” makes a relatively ballsy choice in dispensing with the style that made the first film so noteworthy. And I commend the filmmakers for making this choice. Rather than sticking with a relatively “safe” way to make some coin, the film tries to open up the world in which “Quarantine” occurs. Some more information is given regarding the virus and we learn the scale at which it’s makers are operating. And like “Quarantine”, “Quarantine 2” is a film that paints in broad gestures, concerning itself more with types than actual people. But while the decision to film in a more traditional style does represent an attempt to produce a fresh product, it’s a gesture that gets swallowed up in the sloppy mechanics of the film’s plotting, script, and technical execution.

Set on the same night as the events of the first film, “Quarantine 2” centers on Jenny, a flight attendant on a red-eye flight out of Los Angeles. The plane is full of people we recognize from the last half-century of horror films. There are no characters, only types set up with a few lines of dialogue that tell you (or at least try to tell you) how you are supposed to respond to these people. There is the yuppie douche couple, the handsome man cum hero-lover, the hot-to-trot young couple, grumpy kid, token black guy, a few characters who have some practical knowledge to throw out there so we can move the plot along, and of course Jenny, our final girl figure who learns to take responsibility for herself.

The flight is going as planned when one of the passengers becomes violently ill and attacks Jenny, biting the other flight attendant in the process. After a struggle, the man is subdued and the plane makes an emergency landing. However, once at the airport, the group is sealed inside by whom they are told to be the CDC. Soon more of the passengers and flight crew are coming down with symptoms of the virus and tensions begin to mount as the group attempts to stay alive and escape. But neither the people outside nor one of the passengers are who they say themselves to be.

As previously mentioned, “Quarantine 2” is broad in the tradition of most zombie/infection films which tend to be more concerned with how people interact with each other in these situations rather than the actual zombies. But any greater themes the film is prodding at are left unexplored. Instead we are given scene after scene of everyone saying exactly what they are doing or what is happening right in front of them. When searching through a med-kit, one character tosses out her disappoint when she finds, “Only two lousy doses of lydocane?!” This technique of course produces a number of unintentionally hilarious interactions, one of which involving a computerized voice over a loudspeaker commanding a soldier to kill a cat.

There is no buildup to events, rather they just occur because they need to and then they fade away as unremarkably as they happened. A scene in which Jenny is pursued down a circular ramp by an infected passenger for a solid minute or two is perhaps the most perfect metaphor for the action in the film. The characters act instantly, seemingly conditioned to respond to danger the same way. But their actions seldom lead to anywhere nor do they serve to advance anything about who they are as types or characters. When motivation is trotted out it is usually overly sentimental and ham-fisted. In one moment a character expresses concern for his daughter while a plastic pin with the girls picture is shown pinned to his shirt.

On the technical level, the sound in the film is pretty awful. At times it is difficult to understand the actors as their voices echo off walls. Unintentional ambient noise is present quite a bit and at times voices sound as though they are coming through a door. And while the sincerity of the filmmakers is present throughout the film’s tone, the lack of any self-effacing humor or consistent gore is also a bit disappointing in that it doesn’t quite fulfill the requirements of that DTV film you can put on with your friends and a fifth of something.

The film takes a chance in dispensing with the camera POV. The problem is nothing was added to fill the void. “Quarantine 2” knows the beats and the steps but rushes too fast to get to them.