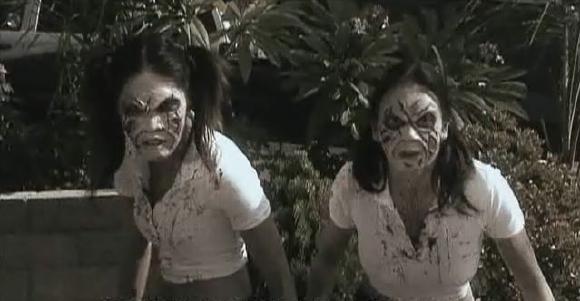 Before watching writer/director Jeff Brookshire's violent 2007 microbudget action-horror hybrid "Awaken the Dead," I had no idea an entire horde of flesh-eating zombies could be kept at bay by a set of cheap Venetian blinds. Never mind the fact that your large, previously existing kitchen window has mysteriously vanished -- as long as you keep your blinds pulled down, all these shambling corpses can do is reach mindlessly between the slats in a vain attempt to ensnare you. Stay out of their way and everything will be as right as rain. Who knew? Not me, that's for sure.

When you're entrenched in a movie as mediocre as this, buried up to your waist in tepid performances and dreadful dialogue, your brain automatically attaches itself to the picture's most interesting elements in order to prevent irreversible brain atrophy. Sadly, "Awaken the Dead" offers no intellectual alternatives; you either watch a handful of second and third-tier actors waddle through a painfully familiar and extremely tired scenario or you nod off about halfway through and drool all over yourself. Had I actually paid money to experience this pathetically-crafted slice of cinematic nonsense, I'd be a pretty irate customer right about now. As it stands, I'm just concerned about the large, impossibly smelly saliva stain currently taking up space on my shirt collar.

Stripped down to its Romero-flavored underwear, "Awaken the Dead" is just another "Night of the Living"-inspired yarn written and directed by someone who's spent way too much time playing "Resident Evil" and "Left 4 Dead." The setup is fairly straightforward: A gaggle of unbearably annoying characters attempt to unravel the mysterious origins of the undead squatters milling about on the front lawn. Could their presence have something to do with the angry young girl who owns the house? Is the mysterious priest with the giant crucifix tattoo on his back somehow connected to this insidious incident? I'll give you one guess. If you need another, kindly step into traffic.

In charge of this small group's overall well-being is Christopher (Gary Kohn), a scruffy, sexually-active priest with a history of violence. Although he's pretty a private guy when it comes to discussing the specifics of his past, he doesn't mind beating someone down if they pose a serious, legitimate threat to the integrity of their makeshift collective. Which works out great, really, since the blood-thirsty zombies circling the perimeter of their cozy suburban sanctuary occasionally like to sneak inside for a quick bite to eat. Besides, it's always nice to have a man of the cloth around the house, especially in times of great peril. If he knows his way around automatic weaponry, well, that's icing on the proverbial cake.

Unfortunately, "Awaken the Dead's" muddled narrative and wretched performances are the least of its worries. Brookshire's direction is, at best, woefully amateur, right down to his bizarre use of film grain and his decision to edit the majority of the picture's action sequences like a mid-90's mainstream rock video. If you're going to make a zombie flick on a tiny, virtually non-existent budget, the trick is to make people believe you spent a lot more than you actually did. With this outing, Brookshire wears his budget directly on his sleeve; it's painfully clear that there wasn't enough money to make this thing fire on all cylinders, a fact which becomes crystal clear towards the film's podunk finale.

At the end of the day, “Awaken the Dead” is a typical low-budget zombie movie with lofty, unachievable aspirations towards higher ground. The gun-toting priest scenario is mildly clever, and there are a handful of twists that make paying attention less of chore than this review may suggest, but the bad ultimately outweighs the good. In addition to suffering through one of the ugliest films I've seen all year, viewers may have difficulty overlooking co-star Lindsey Morris’ scream acting, the several failed attempts at humor, and a slew of dodgy special effects. Considering the vast number of zombie films currently on the market, I'm almost positive you can do better than this. The odds are certainly in your favor.

Severed: Forest of the Dead

Land of the Dead