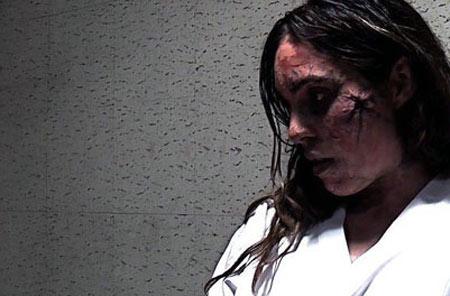 In the realm of independent genre fare, one figures that the low budget zombie flick and the found footage trope would be the equivalent of the old Reeses Peanut Butter Cup ads where chocolate and peanut butter smashed into one another in an orgiastic frenzy, ie; two great tastes that taste great together. Yet despite a legion of low budget zombie flicks being filmed in backyards across the country and the announcement of a new mockumentary style horror film seemingly every day, the genres have not crossed paths often, if at all.

“Pretty Dead” intersperses home videos, surveillance cameras and taped interviews to tell the tragic tale of Regina (Carly Oates) and her fiance Ryan (Ryan Shogren). After a night of partying goes awry, Regina OD's from a bad hit of nose candy and goes into shock before Ryan revives her. While she suffers no aftereffects at first, soon she finds herself unable to keep down normal food, goes days on end without the slightest urge to sleep and to her own shock and chagrin, finds herself craving blood and raw flesh, even if it means sucking the blood off a discarded tampon in order to curb her hunger.

As a medical intern, she finds herself more fascinated than repulsed by her condition at first, and begins conducting experiments to determine the cause of and cure for her condition. However, each day that passes finds her less in control of her urges and unable to slow down her physical and psychological breakdowns. Despite pleading with Ryan to end her life if things continue, her fiancee won't give in, insisting that she seek proper medical help rather than try to hide her condition, and eventually leaving when things become too great to bear. The film travels down the the tragic path that always ends up in bloodshed and entrails.

Oates and Shogren possess enough chemistry as a couple to give their story a sense of pathos and keep the viewer engaged enough to overlook some of the shortcomings of “Pretty Dead”. The two radiate believability as a couple, enough so that you buy into Ryan sticking by Regina's side even as she begins to fill the couple's fridge with medical waste and in one the more stomach churning moments, guzzles a shake that consists of nothing more than pureed human lard. The engagement scene is incredibly sweet and well delivered by both parties. At times Shogren's Ryan comes off as petulant and weak, unable to sway Regina with his arguments to get checked out and often pouting like a child when things don't go his way. It's a trait he exhibits even before her infection (at one point Oate's character grows so frustrated she barks at him to stop acting like her dad) that it feels intentional on the writer's part rather than a defect in Shogren as an actor. He has the unenviable task of being the film's "villain" as he cracks under the tremendous strain of the situation as he realizes this new Regina is not the woman he fell into a desperate kind of love with.

Oates is the standout here, as the film lays on her shoulders. Her Regina is charming and likable and perfect girlfriend material. One can't help but feel for her as her body disintegrates and she gives in to despair and hopelessness. Even when her features are hidden under piles of zombie makeup (which look quite fantastic) she manages to keep a spark of humanity.

One can't help but draw comparisons to Cronenberg's “The Fly”, at least in terms of story parallels. Like the doomed Seth Brundle, Regina finds herself drawn to the scientific ramifications of her affliction , even remarking at one point how her accelerated healing may lead to breakthroughs in medicine. Like Brundle, she finds herself all consumed in her research, failing to see how it drives loved ones away or how far gone she is.

By no means am I suggesting “Pretty Dead” is on par with “The Fly”. The film is not without its myriad of issues. For one, the found footage angle only half works here. While the hospital interrogation scenes and surveillance footage bring an added layer to the storytelling, the tried-and-true method of aiming the home camcorder at characters and letting it rip often proves a distraction here, especially during the moments like Regina's OD, when the friend holding a camera shoots away, blissfully unaware at the seriousness of the situation. Obvious moments where no one in their right minds would hit the record button often prove too great a distraction as to be believable in these films.

The film's climax, or lack thereof, proves disappointing. “Pretty Dead” drops massive hints throughout that Regina must contain or eliminate the virus in her or she'll “spore” and potentially infect thousands of people in her vicinity. Instead of a payoff or even resolution to this angle, “Pretty Dead” peters to an ending, leaving the viewer asking “Is that it?” even after a post-credits coda. I have to imagine the shoestring budget limited the direction the film could take, but it's anticlimactic after a solid first seventy minutes. As Regina's condition worsens it becomes harder to accept Ryan's willingness to stick by her. In one of the more implausible moments, the discovery of human remains in the kitchen leads to a voicemail delivered with the annoyance of a passive aggressive roommate pissed off that someone left the milk out as opposed to finding out one's beloved now subsists on chopped up body parts.

While the dramatic scenes work, the action and attack sequences leave much to be desired. They come off flat and stripped of any menace. Thankfully, there are only a few such moments in the film, as “Pretty Dead” is more concerned with tackling the mental toll and anguish of her predicament.

Despite its flaws, “Pretty Dead” delivers a unique spin on the zombie subgenre. Rather than focusing on the fleeting remnants of humanity holed up against the overwhelming horde of undead, the film provides a touching glimpse at what it feels like to have one's body and mind betray them. Focusing on one woman's individual struggle with being newly undead, it feels short on outright horror but delivers unnerving moments and no-win scenarios that beg the question what the viewer would do in similar circumstances. Given the likability of its leads, “Pretty Dead” offers something more moving and thought provoking that more standard fare.