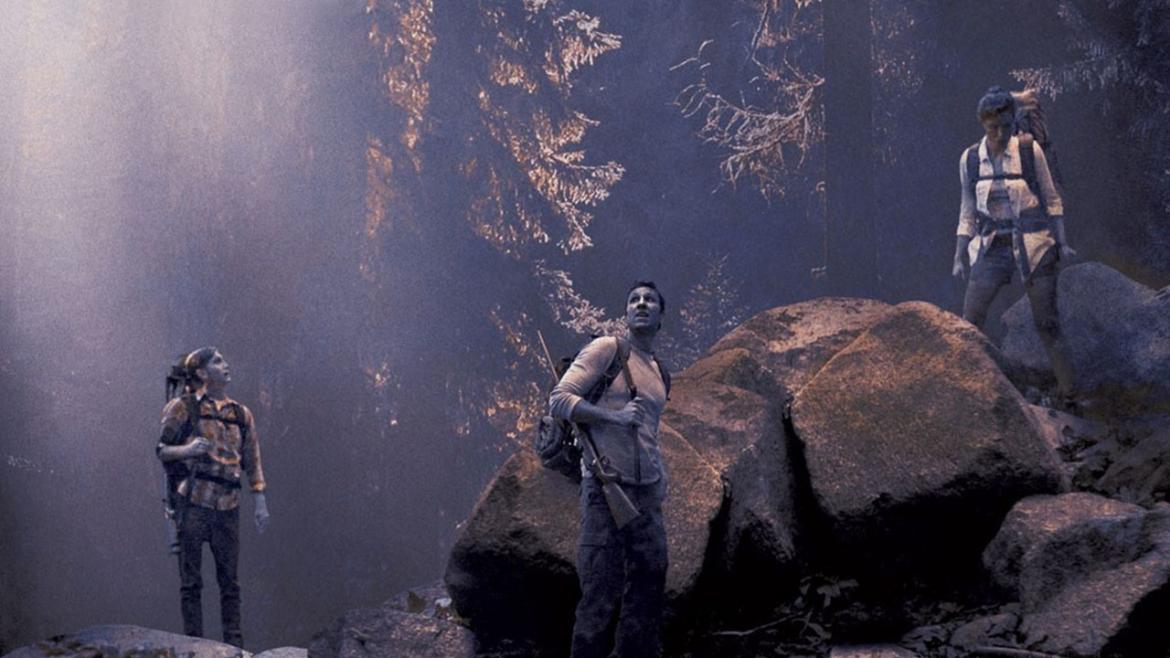 "Man is the only animal who kills for fun." With a tagline like that, how can you say no?

Like so many films that came before it, this one starts with a camping trip. In the car on the way into some remote forest, brothers Sean and Mike Neary sing “The Bear Went Over the Mountain” and pass beers back and forth as the camera inventories the scene. There is a rifle and box of bullets in the trunk, an eager German Shepherd looking at the window, and Mike’s wife, Wit, in the backseat reading. They arrive at the site of their childhood camping trips and find that it has been shut down, probably due to budget cuts. No matter, the brothers remove the chain and pass through, despite Wit’s protests. As the three make their way into the woods the tensions within the group begin to unfold and it becomes obvious that this is not an altogether happy bunch.

After a few bumps the first day things calm down and the group prepares for bed. Wit and Mike climb into their tent, while Sean, a Marine and real outdoorsman, situates himself in a seated position at the base of a tree with his dog, to pass the evening in stoic contemplation and half sleep. When they wake up, the tent is gone, as are the rest of their supplies, and each of them has a black “X” written on their foreheads. Before long, the group is being hunted by a group of masked assailants who have more than a few tricks up their sleeves.

If you have seen the British horror, Eden Lake, some aspects of this film may ring true (though this film doesn't share Eden Lake’s traumatizing ending). Here again we have a couple trying to get off the grid for a romantic trip—albeit joined by Mike’s brother—only to fall victim to what initially seems like a stupid prank. The framework of a group of people heading out into the woods is one that has become well-worn and familiar, but for good reason. There are few things that can feel more isolated and vulnerable than being out in a tent at night. Not in your backyard or a quaint little campsite, surrounded on all sides by fellow campers, but really roughing it. We’re talking being far enough away that there may not be a quick and clear path to safety should you need to find it. The tension and desperation built by this setting alone really help this film to create fear from the get go.

All of the credit shouldn’t go to the narrative and setting, however. Preservation did collect a smattering of awards at various festivals, and features familiar actors from pretty big name premium television like Boardwalk Empire, Mad Men, and Orange is the New Black. This film sets up some pretty eerie and original scenes that will send goosebumps down your spine. If you’ve seen it, a certain shot of a forest full of smiley faces comes to mind. This review must also take a moment to appreciate that this film was not shot on a hand-held camera. As found footage continues to inundate the market, it is easy to decry first-person films that aren’t done well and lament that they weren’t shot more traditionally. So, let’s give this film credit for not taking the easy way out. It paid off. The third-person perspective allowed for so many more camera angles that were really striking.

This film definitely wasn’t without its flaws. Some of the lines feel clunky and forced, but the actors do a pretty damn good job with their delivery, and make the characters pretty relatable, despite a distinct lack of real characterization in the writing. Wrenn Schmidt, as Wit, in particular offers a wonderful performance, despite a character who is written as pretty two-dimensional and maybe a little hacky.

Preservation may not be a trailblazer as far as it’s premise, but it is definitely creepy enough to make you reconsider your next foray into the woods.