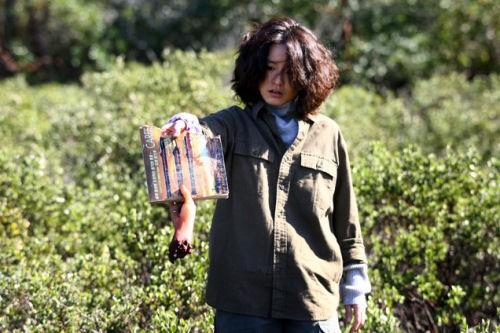 I've been following Jeong-won Shin's 2009 South Korean horror/comedy "Chaw" for several months now, despite the fact that, overall, I'm not really a huge supporter of the "animals run amok" genre. The reasons for my bizarre fixation are probably buried somewhere deep within the complexities of my DNA, remnants of our primitive, cave-dwelling past. I can imagine my ancestors running wildly through forests, their hearts pounding, hunted by large, pig-like creatures with a hankering for human organs. With the assistance of time and evolution, their fears and anxieties are cleverly inserted into my genetic coding, which are then processed and reinterpreted for suburban living. Of course, it could be because I'm hungry.

Were "Van Helsing" director Stephen Sommers hired to direct the remake of Russell Mulcahy's 1984 swine-oriented horror opus "Razorback," it might look something like "Chaw." Although the film is billed a bold mixture of laughs and scares, it actually has more in common with big-budget Hollywood action/adventure movies than anything else. The picture is littered with high-concept chase sequences, an enormous CGI monster, and plenty of Michael Bay-esque humor to break up the frequent bouts of terror and misplaced sentimentality. It's a fun and surprisingly enjoyable ride, but you'll forget all about it fifteen minutes after the end credits.

After stupidly scribbling "anywhere" on his transfer request application, Seoul police officer Kim Kang-soo suddenly finds himself stationed at a tiny village in South Korea, where, his friends joke, he can spend his days chasing tractors and fishing. His pregnant wife, as well as his mentally unstable mother, are none too pleased with the trip, and aren't above expressing exactly how they feel about the subject at any given moment. To make matters worse, the entire local police force seem to be comprised of slackers, layabouts, and morons.

However, before our hero even has a chance to get settled in, a series of bizarre murders begin to take place around the otherwise sleepy, crime-free village. It's apparent from the get-go that these horrible mutilations aren't the work of a human being, but of a enormous, blood-thirsty boar lurking somewhere in the nearby mountains. After the locals and a world-renowned hunter take down the creature during its assault on a group of defenseless farmers, the village discovers that there's another, bigger beast to contend with, one that's none too pleased with the murder of its spouse.

"Chaw" is, for the most part, an enormous amount of giddy, inoffensive fun, though it's certainly not without its problems. The film tends to shift gears frequently, delving into slapstick comedy one second and full-on melodrama the next. It's not as drastic or severe as the tonal changes in Joon-ho Bong's "The Host" or Joon-Hwan Jang's "Save the Green Planet," but they might be distracting to those who aren't used to such cinematic shenanigans. In fact, if and when this thing is ever scooped up by an American distributor, I wouldn't be at all surprised to find that nearly twenty minutes had mysteriously vanished. Mark my words.

The film's greatest asset, in addition to its broad collection of lively performances, is its underlying sense of adventure. Jeong-won Shin manages to stretch his budget for all its worth, giving us some truly memorable set pieces that recall such like-minded endeavors as "Jurassic Park" and, in one particular sequence, "Indiana Jones and the Temple of Doom." The film's oversized villain, meanwhile, is surprisingly well-executed, though there are a few scenes where the CGI boar and its live action adversaries don't blend as well as they should. Regardless, the action is intense and the suspense is palpable, resulting in a flawed but entertaining madcap creature feature that's relatively easy to digest.

Despite the numerous hiccups along the way, "Chaw" delivers plenty of good-natured, B-movie thrills and chills without once taking itself too seriously. Jeong-won Shin's old-school cinematic sensibilities, combined with a great script and a fantastic cast, infuse the picture with an energy rarely found in this sort of genre outing. Had a few wonky subplots, as well as that wretched final scene in the cabin, been left on the cutting room floor, the whole experience would have been a tighter, more enjoyable affair. As it stands, the film is solid all the way around, and should play well with inebriated midnight crowds. You may, however, want to skip the bacon and eggs afterwards.