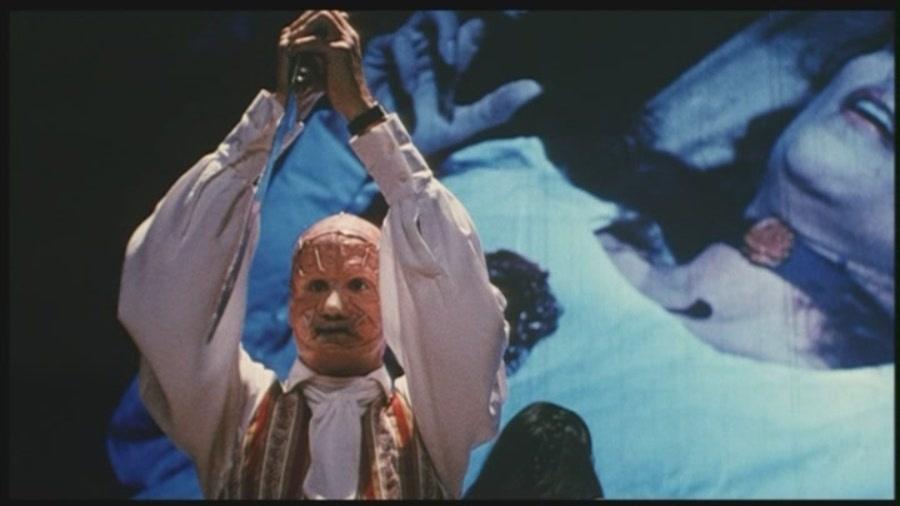 Maggie has nightmares, mostly recurring ones of a crazy man in a trippy movie sacrificing a young woman. She's also a film student at the local community college, so her dreams also serve as inspiration for her script writing. When the crew decides to hold a Horror film festival as a fundraiser to clean up an old theater, all seems well. Film nerds having fun, cleaning to a musical montage, the works. All's well the night of the show until suddenly members of the class begin to disappear after the viewing of a small film role that was found and just so happens to mirror Maggie's nightmare exactly. Is it as Maggie fears, has famed cult leader Lanyard Gates returned from the dead for revenge? Or is there something else afoot?

Ah the 80's; a fine period of horror cinema. At least that's the way it seems as I look back through my rose colored glasses. Often times this holds true; sadly, often times these recollections fall far short of the way I remember them. Perhaps it's the innocence of youth, perhaps it's my newly gnarled old man exterior these days. Regardless, some movies I remember fondly from back in the day, turn out to kind a suck. Such is the case with "Popcorn". Sure, the movie came out in 91, but was a definite hold-out of 80's aesthetic. Clothes, hair, jokes; it was all there and all very 80's.

The premise is a good; movie nerds killed off one by one by a masked killer. We can all get into that, sure. When you take a premise as such and load it down with and hour and a half of boring dialog, useless scenes, musical montages, and lackluster murders, well it just doesn't work out so well.

The story behind "Popcorn" is solid enough. A man running a film cult coming back for revenge. It's a fairly original idea for the time and helps to spice up your standard slasher well. There was even an unexpected twist or two as well. When you throw it all in the pot and boil down, you get stuck with a bland and boring stock, simple enough.

Even the acting for "Popcorn" fell into the 'mediocre' range. Jill Schoelenn, while somewhat well known in horror circles and rather babe-a-licious, was by far the more animated of our group of b-movie hopefuls. Tom Villard chimes in with a decent acting job too, although it does feel a bit of a stretch from his standard 'goofy guy' schtick from classics such as "One Crazy Summer". Everybody else? Not very exciting. I couldn't even tell you their names. (Note: I was saddened to learn that Tom Villard passed away in 94, shortly after the release of "Popcorn".)

The highlight of the flick was the deaths themselves and how they all were worked into their surroundings of the old movie theater and the festival going in. Death by giant mosquito, electrocuted by sound board, on and on. Sure, not plausible necessarily, but pretty fun all the same. The gore content is low but again, it's the thought that counts.

Those of you who remember "Popcorn" with a warm glow, tread lightly. It's not going to be as fun as you remember it. Sleepy, slow and outright boring in parts, the movie is passable as far as story goes. Unfortunately it is low on fright and entertainment overall. In the end; you get to watch Jill Schoelen for an hour and a half. That's not all bad.