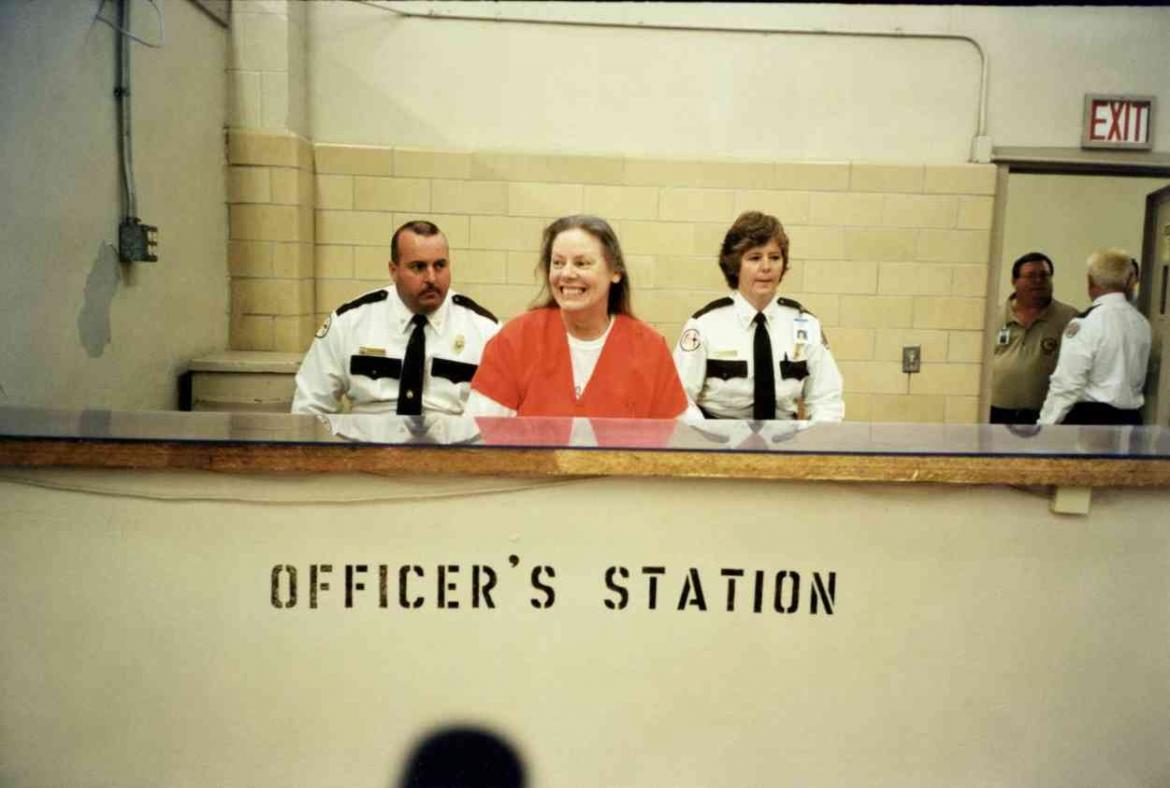 Aileen Wuornos: The Life and Death of a Serial Killer (Movie Review)

Anyone who has spent time browsing the annals of serial killerdom knows that female serial killers are a rare breed compared to their male counterparts. That said there are some pretty nasty death maidens throughout history like, “The Vampire of Barcelona”, Amelia Dyer “The Baby Farmer”, and “La Mataviejitas”. The uncontested rock star of the category is Aileen Wournos. While the term rock star may seem a tad cheeky, you are a better person than me if you can put Aileen’s eerie resemblance to a certain Motor city Madman out of your mind while watching her interviews. Anyway, Wournos’ story or a version of it was told to the tune of one "Best Actress" Oscar in the movie “Monster”. In the real world, the car-hopping prostitute’s savage killing of seven Johns along remote Floridian highways between 1989-1990 landed her in the electric chair on October 9th, 2002.

Shortly after her arrest and confession in 1991, British filmmaker Nick Broomfield produced a documentary called “Aileen Wuornos: The Selling of a Serial Killer”. The thrust of the film was that even before she was convicted Aileen’s case was being marketed by her adopted mother, her ex-lover, her lawyer and police detectives all of whom were hoping to secure film rights and cash payouts. In 2002, Broomfield returned for a follow up that saw him play a role in the appeals process. The resulting film is “Aileen Wuornos: Life and Death of a Serial Killer.”

The narrative picks up with Broomfield’s return to Florida and the introduction of Aileen’s new legal counsel. The new attorney is making a motion for her based on the contention that her previous lawyer Steve Glazer was negligent in his duties. Broomfield takes the stand and defends his earlier film’s unfavorable depiction of the Glazer’s work. Despite the new appeal Wuornos insists that she is ready to die and even goes so far as to undermine her new lawyer and the character witnesses as they try to reopen her case. As the film unfolds we get several interviews with Wuornos, her friends and family. We are also subjected to a large dose of Broomfield’s own ideas about Aileen, her case and the morality of the death penalty.

“Aileen Wuornos: Life and Death of a Serial Killer” is a pretty complex film. At times it seems to possess an even greater depth than Broomfield intends. Or perhaps I am not crediting him enough for a willingness to portray himself as something of a Wuornos apologist. While Broomfield makes no attempt to exonerate Aileen he does make it plain that he would like to see some form of clemency granted, even against her own will if necessary.

What is most fascinating is Broomfield’s choice to include footage of himself defending the editing choices of the first film in court. The continuity of certain excerpts from ‘The Selling of a Serial Killer’ is questioned by the prosecutor in order to refute the allegation that Glazer was negligent while representing Aileen.

The prosecutor’s doubt is not hugely substantive nor is the footage grotesquely reframed to mislead, but Broomfield’s demeanor as a witness does threaten to puncture his credibility. The witness-stand is a place where a person’s manner of speech and the fluidity of their recollection are judged harshly. Broomfield’s testimony is the kind of moment that, when viewed with due skepticism, risks discrediting the person speaking and calls into question how far they will go to make their point. If by including this footage Nick Broomfield is being self-reflexive and inviting an open discourse on the ethics of everything including the construction of the film itself, then this is as ballsy as filmmaking gets.

Even with the filmmaker’s slanted sympathetic view of Aileen’s situation the film still manages to show us the complex nature of her personality. No matter how you feel about her crime and what she did or did not deserve as a consequence, this woman was a victimized soul. The question of how much her widespread sexual trauma and abandonment helped forge the killer is given some voice at points in the documentary, but it does not feel like the purpose.

This is a eulogy for a human being with little or no conscience. It is a challenging film, in that the viewer is asked to hold the hollowing sorrow of Aileen’s early life and then reconcile it with her lack of a genuine mea culpa and her violent wild-eyed tirades. She’s a victim and a beast; and this film stands as an amazing testament to her need for control. Towards the end of the film Aileen is caught on microphone admitting that she changed her original victim stance and sabotaged her defense so that she can hasten her execution. Her family, friends and documentarian contemplate having her declared incompetent to save her from death. It is interesting that their efforts seem to be ignorant of her wishes and blind to the manipulations associated with her pathology.

Aileen Wuornos was a fascinating and frightening person. That this film attempts to humanize her and relate the detail of her life is an admirable thing. It will doubtlessly frustrate those who don’t have ‘sympathy for the devil’, so to speak. There is little attention paid to her victims and Aileen’s beast takes a backseat to her victim role.

However, if you can look past all of this to Broomfield’s messages about the unethical politicizing of death penalty cases there are some worthy ruminations and hardy systemic condemnations. If on the other hand you are just looking for a freak show, there is some of that as well. In the final tally “Aileen Wuornos: Life and Death of a Serial Killer” is a fascinating, doleful portrait of sickness, loss, ethics, and multi-tiered ambitions all of which is phrased through a series of unanswerable questions. I can’t tell if Broomfield assembled the footage with the intention of leaving it so open-ended, but I don’t think it matters.

Movies Like Aileen Wuornos: The Life and Death of a Serial Killer