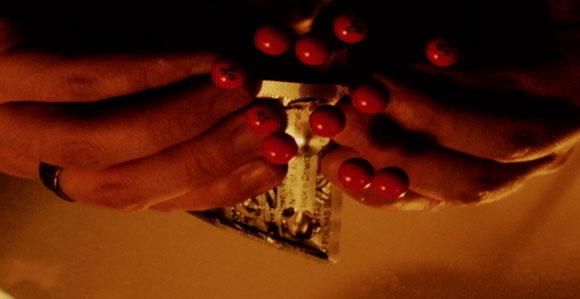 Little Danny has lost his sunshine. Living in an Alabama backwater and soothing a broken heart with cough syrup and antihistamines has siphoned off most of the joy in his life. His best friend Jeff is an alcoholic blowhard and Jeff’s girlfriend Morgan is a misery magnet who is trying to get a little taste of Daniel under Jeff’s nose. Daniel retreats into his music which is so good that the ghosts in his house immediately start fucking with him, presumably to get him to stop playing. The set up is nicely cliché free and authentic; so much so that it inspired me to write out some fatherly advice to young Daniel, more on that later. Dan begins to unravel; the spirits of the house prove to be reflections of his inner-victim and his violent desire to obliterate. When he and Jeff have a falling out, young Dan gives over to the dark impulses and tragedy ensues.

There are aspects of “Pop Skull” that have some real resonance. Anyone who has ever felt the pangs of a bad breakup will probably have some empathy for Daniel. The emotional truth feels pretty genuine, or at least what they are striving for feels genuine. Where this content works best is where the frenetic cutting style and technical accomplishments fuse. “Pop Skull” is constructed like an experimental film without the self-reflexive qualities. The motivation for this style is that the protagonist is both a drug user and a bewildered sad sack pining for his ex. An early voice over dies away as we move out of self-talk and into the Daniel’s unfiltered thoughts. We get bursts of memory, mania, and hallucination represented by a bevy of strobing fades and rapid fire, checkerboard editing. The rule of three becomes the rule of four and five and the use of a tripod diminishes to keep the viewer off balance.

There are a few reasons why I can’t recommend the film. As mentioned the cutting style does pay some really nice dividends in spots; especially where it marries beautifully shot, disparate images to punctuate the melancholy of the whole affair. But all too often we are left watching a jittery montage that while endeavoring to move impressions quickly through the viewer’s mind still manages to be slow and uninteresting. I’m sure that the justifications stem from some sense that carving sorrow and ennui go hand and hand but knowing that doesn’t make this film anymore cinematic.

In actuality my complaints about the middling effectiveness of the cutting style are really just byproducts of a bigger problem, namely Daniel. The performance by Lane Hughes is not bad per se, it is just not compelling. In the first half of the film Hughes plays Daniel as so disinterested that he is uninteresting. Pair this with the fact that little is happening narratively for the first 40 minutes and many viewers may give up entirely. I was tempted to do as much, instead I found myself composing the aforementioned paternal pep talk for downbeat Daniel to help me fill up the empty passages of the second act. It goes a little something like this…

Buck up Son! Against all good sense, a group of young folk decided to make a fictional film about your life; the least you can do is sashay off to the shower. While you’re at it you might trim that pampas grass that you’re passing off as hair. Nobody wants to spend 90 minutes looking at a mid-life crisis on the head of a 20-something. Here’s another idea, let’s lay off the OTC benzo-approximations, go ahead and get yourself a jigger of Mate and some licorice root. We’ll talk about talk therapy later. Your ex-paramour? Incommunicado for now, don’t be drawn in by the promise of reconciliation or the opportunity to castigate her judgment. Spend a few nights on the floor soaking in the pain of your loss and then post an ad on the Onion personals page under the screen name CorrianderKupcake. Lastly, your guitar playing, while moody and appropriate to the tenor of your life, the ghosts hate it. Line the room with smoking sage and play some Dick Dale or B-52’s. Who knows it might even improve your outlook on things. Good luck, Junior.

The good news is that the film improves dramatically in the third act. The camerawork is outstanding and the final thrust of violence carries a good amount of impact. The score is well done and director Adam Wingard flashes talent throughout. This would have been a very impressive 35 minute film. Sadly at 90 minutes it dances a funny line between chop and hop editing and tree-ring-counting dullness while telling a story centered on a character you wouldn’t spend 2 minutes talking to at a party.