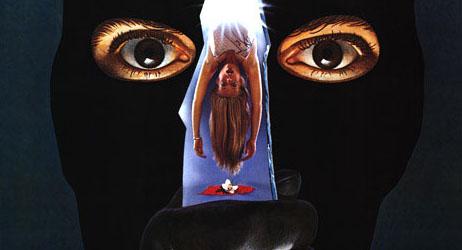 For most people, going to the prom is a pretty straight forward rite of passage. You pick up your date, cart her to the prom, eat dinner, dance, and if you're lucky you might get some action later on. For others, like the kids in the seminal 80's slasher "Prom Night", it seems to be about choreographed Disco dances, unibrows, and being slaughtered in an act of unholy revenge.

"Revenge", in fact, is just the word I would use to sum up this flick, since it does indeed follow in the footsteps of many other 80's "revenge" slashers. The film opens at dusk where a handful of children are playing tag in an abandoned building. After cornering one of the girls at the end of a hallway, the children push a bit too far and send her out the window and plummeting to her death. Showing a surprising amount of forethought for a child (they'll send us to jail!) one of the girls recommends that everyone leaves the scene so that no one will get in trouble. Predictably they do so, and with that the film begins.

Flash forward 6 years later, Kim (Jamie Lee Curtis) and her brother Alex are at the cemetery with their mother and father (Leslie Nielson) to mourn the anniversary of their little sister's passing. Through some murky recaps, we're informed that the children were never blamed for the murder, the onus instead falling on the shoulders of a known sex offender in the area. And it's at this point that we get red-herring number 1, as we soon find out that the same man (who was horribly burned in the ensuing chase with the cops) has escaped from the mental institution and seems to be headed back to town.

The next 15 minutes or so show the rest of the teens (handily matched with flash shots of their younger selves) getting menacing phone calls from a person that we're sure is the killer. Ignoring the calls, they then set off to school and well, the film pretty much grinds to a halt from here. I say "grinds" because nothing really happens that's very important for about another 50 minutes.

The first real kill of the film doesn't come until the hour mark, and not much of what happens before that is all that important. In the broadest sense, you see the teens getting ready for (wait for it) prom night and playing out the usual teen melodrama that naturally ensues on said night. Curtis is involved with a feud with another girl over her boyfriend, and that girl and the school scumbag (complete with the worst UNIBROW EVER) set out for some "Carrie" like revenge at the prom. We're not surprised later when both are sent to the grave before the prank even takes place.

Although I found this film sorely lacking in action, one can't deny that the entire thing is a pretty atmospheric affair. Everything is bathed in this soft glowing light that gives it quite the surreal quality. The vibe is more 70's than 80's (due to it's 1980 release date), and almost sort of reminds me of that time in the early 80's when people hadn't yet realized that the 70's were "so over". The choreographed disco routine featuring Curtis and her beau is especially embarrassing, although certainly worth the price of rental.

When the action finally does kick in I defy you to actually follow it, due to some horribly bad lighting that plagues the entire picture. The opening "dusk" scene is barely visible, and the following night scenes get even worse. I'm sure there was some great direction during those chase scenes, but I'll be damned if I could see a thing. There are some interesting visual moments, a little gratuitous slow-mo here and there and even a few gore shots that worked, but unfortunately it all just feels a bit limp.

Besides the rousing climax and surprisingly touching finale, "Prom Night" was sort of a DOA kind of flick for me. It's historically significant mainly as a result of Curtis' presence, but it also boasts a dramatic turn by Nielson (always cool in these roles) and some awesomely bad 70's fashion and music. A few kills are noteworthy, but they come too late and too few to really make this one worth while for me. See it if you're a Curtis (or slasher) completist, but otherwise I'd say don't waste your time.