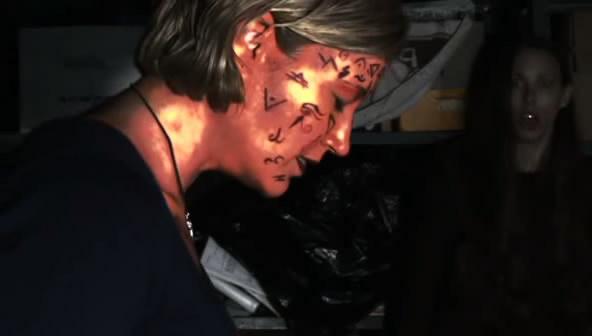 Platoon of the Dead (Movie Review)

Let there be no doubt: zombies are the subject du jour when it comes to low budget horror. Just as in the uprisings they portray, you can spit in any direction and guarantee you will hit a low budget zombie movie. These movies will range anywhere from your standard Romero knockoff -- three survivors trying to make it through the night -- to those with grand visions in mind and goals of knocking the proverbial head off of the living dead with their new and cutting edge ideas. Such is "Platoon of the Dead" which likely began with grand ideas, but falls far short of its goals.

In the near future, the dead rise from their graves and take action. This time however, they are more organized and form their own army to take on the living. Not content to sit about and be taken over idly, the human race pits its military strengths against this army of the dead. We follow along as one supposedly elite unit gets separated from their main battalion on a mission and are cornered by the dead in an abandoned farm house. They quickly find out they are not alone, however, with three single ladies taking refuge inside, and before long, they learn that there is more to these ladies than meets the eye.

I've long been a supporter of low budget cinema despite its pitfalls. There are always problems that come along with these types of films but sometimes those problems are endearing, and there really are some solid ideas out there backing them up. Generally the issues stem from green film makers that are just starting out -- and that's fine. My favorite of these films to champion are the ones that bring in new ideas to change up sub-genres that are mired in years of repetition, that is, as long as they can carry off a cohesive story. In "Platoon of the Dead", the ideas are grand indeed and on paper they seem like just the thing to give zombie movies a shot in the arm. Unfortunately, the movie becomes a victim of bad editing and slow pace so that the minutiae of the epic plot is lost in the ensuing slog.

The plot driving "Platoon" is really the only redeeming factor going on here. The idea of semi-intelligent undead that have organized into their own fighting force is fun. Sure, we have specific tropes that we like to stick to for our brain munching fun, but it is nice to throw a monkey wrench in there from time to time. There is a lot of mystery left in the first two acts of "Platoon of the Dead" that leaves us not knowing what exactly caused these zombies to be smarter than the average bear. This manages to be relatively engaging as we're seeing something new here, so naturally we want to know why it is different. The resolution comes later in the third act of the film. While it is acceptable and explains the nature of the beast we are dealing with, by the time this comes to the screen we are so beaten down by rookie acting and over-long scenes of people talking, the effect is completely lost.

"Platoon" is filled with bad acting but that isn't so much of a problem. Once again, this is independent film here so we're not expecting Oscar worthy performances by any means. In fact, there are some flashes of good acting here, though that is the exception, not the rule. The leader of our little band of misfits works pretty hard to be believable as both an actor and as a long haired military lieutenant. His lackey who is the 'experienced' member of this 'elite' unit, Sargent Butler, actually turns out to be fairly hilarious in his bullheaded tough-guy schtick. But again, it is normally best to not let sub par acting get you down in a film such as this, it comes with the territory. The big problem in "Platoon of the Dead" is the dreaded 'E' word: editing.

There are several moments throughout this film that you simply lose focus and start to stare at that little blurry spot you see when your eyes begin to cross. The scenes which could have been more effective tend to spiral out of control into long moments of stilted dialog. When our epic reveal in the third act arrives, we've already begun to drift off into other distractions or begun to watch the movie with half an eye. Where we should have been enjoying the big payoff, instead we feel merely just a bump in the road.

"Platoon of the Dead" is ambitious and the filmmakers have good intentions and a solid dream to achieve. It suffers though from a meandering plot in what should have been a straight, direct tale of epic proportions. With some help in the editing department this could have grown into something special, despite the already special qualities in their use of peanut butter for zombie makeup. And that, I wish I made up.